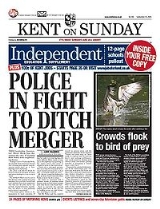 Encyclopedia
Kent on Sunday is a multi-award winning regional newspaper
Newspaper
A newspaper is a scheduled publication containing news of current events, informative articles, diverse features and advertising. It usually is printed on relatively inexpensive, low-grade paper such as newsprint. By 2007, there were 6580 daily newspapers in the world selling 395 million copies a...
covering the county of Kent
Kent
Kent is a county in southeast England, and is one of the home counties. It borders East Sussex, Surrey and Greater London and has a defined boundary with Essex in the middle of the Thames Estuary. The ceremonial county boundaries of Kent include the shire county of Kent and the unitary borough of...
in the United Kingdom
United Kingdom
The United Kingdom of Great Britain and Northern IrelandIn the United Kingdom and Dependencies, other languages have been officially recognised as legitimate autochthonous languages under the European Charter for Regional or Minority Languages...
. It is published on every Sunday of the year and is available from supermarkets, garages
Automobile repair shop
An automobile repair shop is a place where automobiles are repaired by auto mechanics and electricians.- Types :The automotive garage can be divided in so many category....
and newsagents. The newspaper is the flagship paper of the KOS Media
KOS Media
KOS Media is a multimedia company based in the county of Kent in South East England. The company operates local newspapers and internet sites throughout the county.-History:...
publishing company.

In June 2009 the Kent on Sunday began to charge 90p per issue in the newsagents, whilst the free copies were directed to business rounds and home delivery. Kent on Sunday also has a fast growing e-edition, which is available free online through www.kentnews.co.uk or by subscription. The UKPG website quoted KOS Media’s Managing Director Paul Stannard as saying, “As with any media company, if in the next four to five years we see the market decline at the same rate it has in the past six months, then everybody will be looking at their business model”.

In June 2010, it was announced that KOS Media would be taken over by the Archant Media Group.

Archant were rumoured to have previously funded the KOS Media Group and decided to take up the chance to own the company.

In December 2010, KOS Media, under Archant, made it public knowledge that they would be going through a re-structure and changing some of the titles that existed within the group.

In January 2011, as part of the restructure, KOS Media stopped printing the "Your" titles and instead only published them as an online E-edition.

KOS Media were one of the first local media organisations to have their own Iphone Application, allowing readers to look through the papers via their Iphone or Ipad.

Also in January 2011, the weekend papers, Kent On Sunday & the Kent on Saturday, were re-branded with a new mast-head.
The source of this article is wikipedia, the free encyclopedia.  The text of this article is licensed under the GFDL.