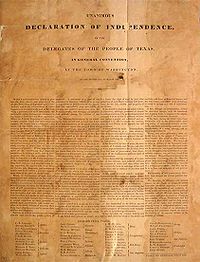 The Texas Declaration of Independence was the formal declaration of independence of the Republic of Texas
Republic of Texas
The Republic of Texas was an independent nation in North America, bordering the United States and Mexico, that existed from 1836 to 1846.Formed as a break-away republic from Mexico by the Texas Revolution, the state claimed borders that encompassed an area that included all of the present U.S...
from Mexico
Mexico
The United Mexican States , commonly known as Mexico , is a federal constitutional republic in North America. It is bordered on the north by the United States; on the south and west by the Pacific Ocean; on the southeast by Guatemala, Belize, and the Caribbean Sea; and on the east by the Gulf of...
in the Texas Revolution
Texas Revolution
The Texas Revolution or Texas War of Independence was an armed conflict between Mexico and settlers in the Texas portion of the Mexican state Coahuila y Tejas. The war lasted from October 2, 1835 to April 21, 1836...
. It was adopted at the Convention of 1836
Convention of 1836
The Convention of 1836 was the meeting of elected delegates in Washington-on-the-Brazos, Texas in March 1836. The Texas Revolution had begun five months previously, and the interim government, known as the Consultation, had wavered over whether to declare independence from Mexico or pledge to...
at Washington-on-the-Brazos
Washington-on-the-Brazos, Texas
Washington-on-the-Brazos is an unincorporated area along the Brazos River in Washington County, Texas, United States. It was founded when Texas was still a part of Mexico, and the settlement became the site of the Convention of 1836 and the signing of the Texas Declaration of Independence...
on March 2, 1836, and formally signed the following day after errors were noted in the text.

In October 1835, settlers in Mexican Texas
Mexican Texas
Mexican Texas is the name given by Texas history scholars to the period between 1821 and 1836, when Texas was an integral part of Mexico. The period began with Mexico's victory over Spain in its war of independence in 1821. For the first several years of its existence, Mexican Texas operated very...
launched the Texas Revolution
Texas Revolution
The Texas Revolution or Texas War of Independence was an armed conflict between Mexico and settlers in the Texas portion of the Mexican state Coahuila y Tejas. The war lasted from October 2, 1835 to April 21, 1836...
.

However, within Texas, many struggled with understanding what was the ultimate goal of the Revolution. Some believed that the goal should be total independence from Mexico, while others sought the reimplementation of the Mexican Constitution of 1824 (which offered greater freedoms than the centralist government declared in Mexico the prior year). To settle the issue, a convention was called for March 1836.

This convention differed from the previous Texas councils of 1832
Convention of 1832
The Convention of 1832 was the first political gathering of colonists in Mexican Texas. Delegates sought reforms from the Mexican government and hoped to quell the widespread belief that settlers in Texas wished to secede from Mexico...
, 1833
Convention of 1833
The Convention of 1833 , a political gathering of settlers in Mexican Texas, was a successor to the Convention of 1832, whose requests had not been addressed by the Mexican government...
, and the 1835 Consultation. Many of the delegates to the 1836 convention were young men who had only recently arrived in Texas, although many of them had participated in one of the battles in 1835. Most of the delegates were members of the War Party and were adamant that Texas must declare its independence from Mexico. Forty-one delegates arrived in Washington-on-the-Brazos on February 28.

The convention was convened on March 1 with Richard Ellis
Richard Ellis (politician)
Richard Ellis was an American plantation owner, politician, and judge on the Fourth Circuit Court of Alabama. He was president of the Convention of 1836 that declared Texas' independence from Mexico, signed the Texas Declaration of Independence, and later served in the Republic of Texas...
as president. The delegates selected a committee of five to draft a declaration of independence; the committee was led by George Childress and also included Edward Conrad, James Gaines, Bailey Hardeman
Bailey Hardeman
Bailey Hardeman was the first Secretary of the Treasury for the Republic of Texas.Bailey was a younger son of Thomas Hardeman and his first wife Mary Perkins. Both families were early settlers in Tidewater Virginia...
, and Collin McKinney
Collin McKinney
Collin McKinney was a land surveyor, merchant, politician, and lay preacher. He is best known as an important figure in the Texas Revolution as being one of the five individuals who drafted the Texas Declaration of Independence and the oldest person to sign it.-Biography:McKinney was born in...
. The committee submitted its draft within a mere 24 hours, leading historians to speculate that Childress had written much of it before his arrival at the Convention.

The declaration was approved on March 2 with no debate. Based primarily on the writings of John Locke
John Locke
John Locke FRS , widely known as the Father of Liberalism, was an English philosopher and physician regarded as one of the most influential of Enlightenment thinkers. Considered one of the first of the British empiricists, following the tradition of Francis Bacon, he is equally important to social...
and Thomas Jefferson
Thomas Jefferson
Thomas Jefferson was the principal author of the United States Declaration of Independence and the Statute of Virginia for Religious Freedom , the third President of the United States and founder of the University of Virginia...
, the declaration proclaimed that the Mexican government "ceased to protect the lives, liberty, and property of the people, from whom its legitimate powers are derived" and complained about "arbitrary acts of oppression and tyranny". The declaration officially established the Republic of Texas
Republic of Texas
The Republic of Texas was an independent nation in North America, bordering the United States and Mexico, that existed from 1836 to 1846.Formed as a break-away republic from Mexico by the Texas Revolution, the state claimed borders that encompassed an area that included all of the present U.S...
.

Among others, the declaration mentions the following reasons for the separation:

Some believe that one of the reasons for the secession was Mexico’s abolition of slavery.
In 1829 Mexico abolished slavery, but it granted an exception until 1830 to Texas. That year Mexico made the importation of slaves illegal.Anglo-American immigration to the province slowed at this point, with settlers angry about the changing rules. To circumvent the law, numerous Anglo-American colonists converted their slaves to indentured servants, but with life terms. Others simply called their slaves indentured servants without legally changing their status. Slaveholders trying to enter Mexico would force their slaves to sign contracts claiming that the slaves owed money and would work to pay the debt. The low wages the slave would receive made repayment impossible, and the debt would be inherited, even though no slave would receive wages until age eighteen. In 1832 the state passed legislation prohibiting worker contracts from lasting more than ten years. The abolition of slavery created tensions between the Mexican government and slave-holding settlers from the United States. These tensions came to a head in the Anahuac Disturbances. In August 1831, Juan Davis Bradburn the military commander of the custom station on Upper Galveston Bay gave asylum to two men who had escaped from slavery in Louisiana. The slaveowner hired William Barret Travis, a local lawyer, in an attempt to retrieve the men. When Bradburn arrested Travis on suspicion of plotting an insurrection, settlers rebelled. The disturbances were resolved through a combination of arms and political maneuvering. One result was the Turtle Bayou Resolutions which were an explanation of the grievances that had led to the disturbances. One of the resolutions challenged Bradburn for "advising and procuring servants to quit the service of their masters, and offering them protection; causing them to labor for his benefits, and refusing to compensate them for the same.

Others dispute this contention and argue that there is little evidence to support this assertion. Only three contemporary references have been found that indicate a potential connection between slavery and the revolution. On the other hand, many other motivations for revolution have been documented, including taxation, tariffs, and lack of protection of rights that settlers had become accustomed to in the United States. 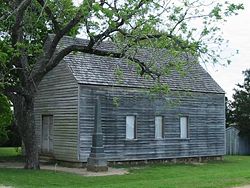 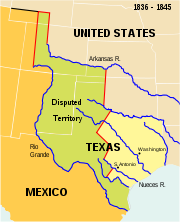 Fifty-nine men signed the Declaration of Independence. Ten of them had lived in Texas for more than six years, while one-quarter of them had been in the province for less than a year.