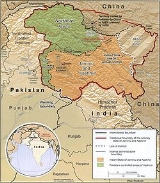 Encyclopedia
A territorial dispute is a disagreement over the possession/control of land between two or more state
Sovereign state
A sovereign state, or simply, state, is a state with a defined territory on which it exercises internal and external sovereignty, a permanent population, a government, and the capacity to enter into relations with other sovereign states. It is also normally understood to be a state which is neither...
s or over the possession or control of land by a new state and occupying power after it has conquered the land from a former state no longer currently recognized by the new state. 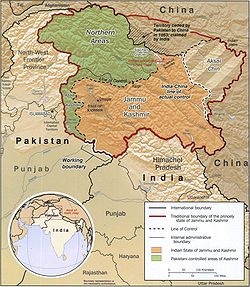 These disputes are often related to the possession of natural resource
Natural resource
Natural resources occur naturally within environments that exist relatively undisturbed by mankind, in a natural form. A natural resource is often characterized by amounts of biodiversity and geodiversity existent in various ecosystems....
s such as river
River
A river is a natural watercourse, usually freshwater, flowing towards an ocean, a lake, a sea, or another river. In a few cases, a river simply flows into the ground or dries up completely before reaching another body of water. Small rivers may also be called by several other names, including...
s, fertile farmland, mineral
Mineral
A mineral is a naturally occurring solid chemical substance formed through biogeochemical processes, having characteristic chemical composition, highly ordered atomic structure, and specific physical properties. By comparison, a rock is an aggregate of minerals and/or mineraloids and does not...
or oil
Petroleum
Petroleum or crude oil is a naturally occurring, flammable liquid consisting of a complex mixture of hydrocarbons of various molecular weights and other liquid organic compounds, that are found in geologic formations beneath the Earth's surface. Petroleum is recovered mostly through oil drilling...
resources although the disputes can also be driven by culture
Culture
Culture is a term that has many different inter-related meanings. For example, in 1952, Alfred Kroeber and Clyde Kluckhohn compiled a list of 164 definitions of "culture" in Culture: A Critical Review of Concepts and Definitions...
, religion
Religion
Religion is a collection of cultural systems, belief systems, and worldviews that establishes symbols that relate humanity to spirituality and, sometimes, to moral values. Many religions have narratives, symbols, traditions and sacred histories that are intended to give meaning to life or to...
and ethnic nationalism
Ethnic nationalism
Ethnic nationalism is a form of nationalism wherein the "nation" is defined in terms of ethnicity. Whatever specific ethnicity is involved, ethnic nationalism always includes some element of descent from previous generations and the implied claim of ethnic essentialism, i.e...
. Territorial disputes result often from vague and unclear language in a treaty that set up the original boundary.

Territorial disputes are a major cause of war
War
War is a state of organized, armed, and often prolonged conflict carried on between states, nations, or other parties typified by extreme aggression, social disruption, and usually high mortality. War should be understood as an actual, intentional and widespread armed conflict between political...
s and terrorism
Terrorism
Terrorism is the systematic use of terror, especially as a means of coercion. In the international community, however, terrorism has no universally agreed, legally binding, criminal law definition...
as states often try to assert their sovereignty
Sovereignty
Sovereignty is the quality of having supreme, independent authority over a geographic area, such as a territory. It can be found in a power to rule and make law that rests on a political fact for which no purely legal explanation can be provided...
over a territory through invasion, and non-state entities try to influence the actions of politicians through terrorism. International law does not support the use of force by one state to annex the territory of another state. The UN Charter says: "All Members shall refrain in their international relations from the threat or use of force against the territorial integrity or political independence of any state, or in any other manner inconsistent with the Purposes of the United Nations."

In some cases, where the boundary is not demarcated, such as Ladakh plateau
Aksai Chin
Aksai Chin is one of the two main disputed border areas between China and India, and the other is South Tibet, which comprises most of India's Arunachal Pradesh. It is administered by China as part of Hotan County in the Hotan Prefecture of Xinjiang Autonomous Region, but is also claimed by India...
, the Taiwan Strait
Taiwan Strait
The Taiwan Strait or Formosa Strait, formerly known as the Black Ditch, is a 180-km-wide strait separating Mainland China and Taiwan. The strait is part of the South China Sea and connects to East China Sea to the northeast...
, and Occupied Kashmir, both sides define a line of control
Line of Control
The term Line of Control refers to the military control line between the Indian- and Pakistani-controlled parts of the former princely state of Jammu and Kashmir—a line which, to this day, does not constitute a legally recognized international boundary but is the de facto border...
that serves as international border de facto; but in the case of Kashmir
Kashmir
Kashmir is the northwestern region of the Indian subcontinent. Until the mid-19th century, the term Kashmir geographically denoted only the valley between the Great Himalayas and the Pir Panjal mountain range...
, it is a temporary solution to the ongoing strife. Although these lines are often clearly demarcated, they do not have the legitimacy of an agreed international boundary.