The Taymyr Peninsula is a peninsula in the Far North of Russia, in the Siberian Federal District
Siberian Federal District
Siberian Federal District is one of the eight federal districts of Russia. Its population was 19,254,300 according to the 2010 Census, living on an area of...
, that forms the northernmost part of mainland Eurasia
Eurasia
Eurasia is a continent or supercontinent comprising the traditional continents of Europe and Asia ; covering about 52,990,000 km2 or about 10.6% of the Earth's surface located primarily in the eastern and northern hemispheres...
and Asia
Asia
Asia is the world's largest and most populous continent, located primarily in the eastern and northern hemispheres. It covers 8.7% of the Earth's total surface area and with approximately 3.879 billion people, it hosts 60% of the world's current human population...
. It lies between the Yenisei Gulf
Yenisei Gulf
The Yenisei Gulf is a large and long estuary through which the lower Yenisei River flows into the Kara Sea.The Yenisei Gulf is formed by the river widening to an average of 50 km for up to 250 km in a roughly north-south direction, between a latitude of 70° 30' N in the area around...
of the Kara Sea
Kara Sea
The Kara Sea is part of the Arctic Ocean north of Siberia. It is separated from the Barents Sea to the west by the Kara Strait and Novaya Zemlya, and the Laptev Sea to the east by the Severnaya Zemlya....
and the Khatanga Gulf
Khatanga Gulf
The Khatanga Gulf or Khatanga Bay is a large tidal estuary in the Laptev Sea. It is relatively narrow, its length being 220 km with a maximum width of 54 km....
of the Laptev Sea
Laptev Sea
The Laptev Sea is a marginal sea of the Arctic Ocean. It is located between the northern coast of Siberia, the Taimyr Peninsula, Severnaya Zemlya and the New Siberian Islands. Its northern boundary passes from the Arctic Cape to a point with co-ordinates of 79°N and 139°E, and ends at the Anisiy...
in Krasnoyarsk Krai
Krasnoyarsk Krai
Krasnoyarsk Krai is a federal subject of Russia . It is the second largest federal subject after the Sakha Republic, and Russia's largest krai, occupying an area of , which is 13% of the country's total territory. The administrative center of the krai is the city of Krasnoyarsk...
, Russia
Russia
Russia or , officially known as both Russia and the Russian Federation , is a country in northern Eurasia. It is a federal semi-presidential republic, comprising 83 federal subjects...
. 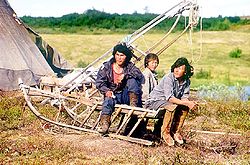 The isolated location of the Nganasan people
Nganasan people
The Nganasans are one of the indigenous peoples of Siberia. They are the northernmost of the Samoyedic peoples, living on the Taymyr Peninsula by the Arctic Ocean. Their territory is part of Krasnoyarsk Krai. Their "capital" is the settlement of Ust-Avam...
enabled them to maintain shamanistic
Shamanism
Shamanism is an anthropological term referencing a range of beliefs and practices regarding communication with the spiritual world. To quote Eliade: "A first definition of this complex phenomenon, and perhaps the least hazardous, will be: shamanism = technique of ecstasy." Shamanism encompasses the...
practices even in the 20th century.

MMC Norilsk Nickel
MMC Norilsk Nickel
MMC Norilsk Nickel is a nickel and palladium mining and smelting company. Its largest operations are located in the Norilsk–Talnakh area, in northern Russia. MMC stands for "Mining and Metallurgical Company"....
conducts mining operations in the area. The company conducts smelting
Smelting
Smelting is a form of extractive metallurgy; its main use is to produce a metal from its ore. This includes iron extraction from iron ore, and copper extraction and other base metals from their ores...
operations in the area of the city of Norilsk
Norilsk
Norilsk is an industrial city in Krasnoyarsk Krai, Russia, located between the Yenisei River and the Taymyr Peninsula. Population: It was granted city status in 1953. It is the northernmost city in Siberia and the world's second largest city north of the Arctic Circle...
, near the peninsula. The nickel ore concentrate and other products of the company are transported over a short railroad to the port city of Dudinka
Dudinka
Dudinka is a town and the administrative center of Taymyrsky Dolgano-Nenetsky District of Krasnoyarsk Krai, Russia. It was the administrative center of Taymyr Autonomous Okrug, which was merged into Krasnoyarsk Krai on January 1, 2007. It is a port in the lower reaches of the Yenisei River,...
on the Yenisei River, and from there by boat to Murmansk
Murmansk
Murmansk is a city and the administrative center of Murmansk Oblast, Russia. It serves as a seaport and is located in the extreme northwest part of Russia, on the Kola Bay, from the Barents Sea on the northern shore of the Kola Peninsula, not far from Russia's borders with Norway and Finland...
and other ports. 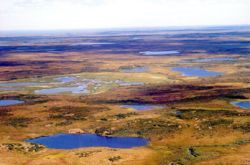 The coasts of the Taymyr Peninsula are frozen most of the year, between September and June on average. The summer season is short, especially on the shores of the Laptev Sea in the northeast.