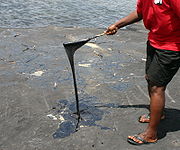 A tar pit, or more accurately known as an asphalt pit or asphalt lake, is a geological
Geology
Geology is the science comprising the study of solid Earth, the rocks of which it is composed, and the processes by which it evolves. Geology gives insight into the history of the Earth, as it provides the primary evidence for plate tectonics, the evolutionary history of life, and past climates...
occurrence where subterranean bitumen leaks to the surface, creating a large area of natural asphalt
Asphalt
Asphalt or , also known as bitumen, is a sticky, black and highly viscous liquid or semi-solid that is present in most crude petroleums and in some natural deposits, it is a substance classed as a pitch...
.

There are only a few known asphalt lakes worldwide:


There are other fossil-bearing asphalt deposits in Oklahoma
Oklahoma
Oklahoma is a state located in the South Central region of the United States of America. With an estimated 3,751,351 residents as of the 2010 census and a land area of 68,667 square miles , Oklahoma is the 28th most populous and 20th-largest state...
, Texas
Texas
Texas is the second largest U.S. state by both area and population, and the largest state by area in the contiguous United States.The name, based on the Caddo word "Tejas" meaning "friends" or "allies", was applied by the Spanish to the Caddo themselves and to the region of their settlement in...
, Peru
Peru
Peru , officially the Republic of Peru , is a country in western South America. It is bordered on the north by Ecuador and Colombia, on the east by Brazil, on the southeast by Bolivia, on the south by Chile, and on the west by the Pacific Ocean....
, Trinidad
Trinidad and Tobago
Trinidad and Tobago officially the Republic of Trinidad and Tobago is an archipelagic state in the southern Caribbean, lying just off the coast of northeastern Venezuela and south of Grenada in the Lesser Antilles...
, Iran
Iran
Iran , officially the Islamic Republic of Iran , is a country in Southern and Western Asia. The name "Iran" has been in use natively since the Sassanian era and came into use internationally in 1935, before which the country was known to the Western world as Persia...
, Russia
Russia
Russia or , officially known as both Russia and the Russian Federation , is a country in northern Eurasia. It is a federal semi-presidential republic, comprising 83 federal subjects...
and Poland
Poland
Poland , officially the Republic of Poland , is a country in Central Europe bordered by Germany to the west; the Czech Republic and Slovakia to the south; Ukraine, Belarus and Lithuania to the east; and the Baltic Sea and Kaliningrad Oblast, a Russian exclave, to the north...
.

For other rich deposits, fossilized where they occurred, see Lagerstätten. Tar pits are the resting places of many fossils.

Animals are usually unable to escape from the asphalt when they fall in, making these pits excellent locations to excavate bones of prehistoric animals. The La Brea Tar Pits Museum is built around the tar pit and houses the fossilized remains of mammals and birds found within. The tar pits can trap animals because the asphalt that seeps up from underground forms a bitumen pit thick enough to relentlessly grab even mammoths until they die of starvation, exhaustion of trying to escape or from the heat that would come from the sun.

Brooks in his seminal work The Mythical Man-Month
The Mythical Man-Month
The Mythical Man-Month: Essays on Software Engineering is a book on software engineering and project management by Fred Brooks, whose central theme is that "adding manpower to a late software project makes it later"...
(1975) has a chapter entitled "The tar pit", alluding to the tendency of software projects, once in trouble, never to escape from that trouble, any attempt to do so making it worse.
The source of this article is wikipedia, the free encyclopedia.  The text of this article is licensed under the GFDL.