The poems in the collection are told by a group of adults in the tavern of the Wayside Inn
Wayside Inn
The Wayside Inn is an historic landmark inn located in Sudbury, Massachusetts, in the USA. The inn is still in operation, offering a restaurant, historically accurate guest rooms, and hosting for small receptions. It is reputedly the oldest operating inn in the country, opening as Howe's Tavern in...
in Sudbury, Massachusetts
Sudbury, Massachusetts
Sudbury is a town in Middlesex County, Massachusetts, United States, population 17,659. The town was incorporated in 1639, with the original boundaries including what is now Wayland. Wayland split from Sudbury in 1780. When first incorporated, it included and parts of Framingham, Marlborough, Stow...
, 20 miles from Cambridge
Cambridge, Massachusetts
Cambridge is a city in Middlesex County, Massachusetts, United States, in the Greater Boston area. It was named in honor of the University of Cambridge in England, an important center of the Puritan theology embraced by the town's founders. Cambridge is home to two of the world's most prominent...
, and a favorite resort for parties from Harvard College
Harvard College
Harvard College, in Cambridge, Massachusetts, is one of two schools within Harvard University granting undergraduate degrees...
. The narrators are friends of the author who, though they were not named, were so plainly characterized as to be easily recognizable. Among those of wider fame are Ole Bull
Ole Bull
Ole Bornemann Bull was a Norwegian violinist and composer.-Background:Bull was born in Bergen. He was the eldest of ten children of Johan Storm Bull and Anna Dorothea Borse Geelmuyden . His brother, Georg Andreas Bull became a noted Norwegian architect...
, the violinist, and Thomas William Parsons
Thomas William Parsons
Thomas William Parsons was an American dentist and poet.Parsons was educated at the Boston Latin School, and visited Italy to study Italian literature in 1836-7...
, the poet and translator of Dante
DANTE
Delivery of Advanced Network Technology to Europe is a not-for-profit organisation that plans, builds and operates the international networks that interconnect the various national research and education networks in Europe and surrounding regions...
. Each of the three parts has a prelude and a finale, and there are interludes which link together the tales and introduce the narrators. The prelude for the first part begins:

Most of the stories were derived by Longfellow from his wide reading — many of them from the legends of continental Europe
Europe
Europe is, by convention, one of the world's seven continents. Comprising the westernmost peninsula of Eurasia, Europe is generally 'divided' from Asia to its east by the watershed divides of the Ural and Caucasus Mountains, the Ural River, the Caspian and Black Seas, and the waterways connecting...
, a few from American sources. The best known inclusion is the previously-published poem "Paul Revere's Ride
Paul Revere's Ride (poem)
"Paul Revere's Ride" is a poem by an American poet Henry Wadsworth Longfellow that commemorates the actions of American patriot Paul Revere on April 18, 1775.-Overview:...
". It also includes "The Saga of King Olaf
The Saga of King Olaf
"The Saga of King Olaf" is a poem by American poet Henry Wadsworth Longfellow, published in 1863, as the largest part of his work Tales of a Wayside Inn. The poem is written in twenty-two parts and follows the adventures of King Olaf of Norway, spurred to avenge his slain father and reclaim his...
"; Longfellow started working on that poem as early as 1856, making it the oldest in the collection. 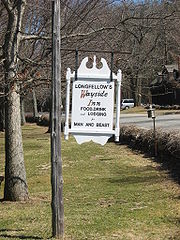 Longfellow undertook the large-scale project in part to combat grief over the death of his wife Fanny in 1861. He originally intended to call the collection The Sudbury Tales, but was afraid it sounded too similar to Geoffrey Chaucer's
Geoffrey Chaucer
Geoffrey Chaucer , known as the Father of English literature, is widely considered the greatest English poet of the Middle Ages and was the first poet to have been buried in Poet's Corner of Westminster Abbey...
The Canterbury Tales
The Canterbury Tales
The Canterbury Tales is a collection of stories written in Middle English by Geoffrey Chaucer at the end of the 14th century. The tales are told as part of a story-telling contest by a group of pilgrims as they travel together on a journey from Southwark to the shrine of Saint Thomas Becket at...
and renamed it Tales of a Wayside Inn. Longfellow visited the real-life Wayside Inn
Wayside Inn
The Wayside Inn is an historic landmark inn located in Sudbury, Massachusetts, in the USA. The inn is still in operation, offering a restaurant, historically accurate guest rooms, and hosting for small receptions. It is reputedly the oldest operating inn in the country, opening as Howe's Tavern in...
in 1862 with his friend and publisher James Thomas Fields
James Thomas Fields
James Thomas Fields was an American publisher, editor, and poet.-Early life and family:He was born in Portsmouth, New Hampshire on December 31, 1817 and named James Field; the family later added the "s". His father was a sea captain and died before Fields was three...
. At the time, the inn was called the Red Horse Tavern and had closed after the owner, Lyman Howe, died in 1861. It would not reopen as an inn until 1897. Longfellow referred to it as "a rambling, tumble-down building".

The collection was first published in 1863 with an initial print run of 15,000 copies. A second series was published in 1870, and a third published in 1872–1873. Though they sold well, the latter two volumes were less popular than the first.