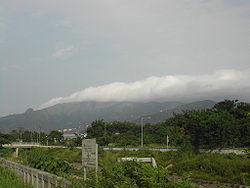 Tai Mo Shan has the highest peak
Mountain
Image:Himalaya_annotated.jpg|thumb|right|The Himalayan mountain range with Mount Everestrect 58 14 160 49 Chomo Lonzorect 200 28 335 52 Makalurect 378 24 566 45 Mount Everestrect 188 581 920 656 Tibetan Plateaurect 250 406 340 427 Rong River...
in Hong Kong
Hong Kong
Hong Kong is one of two Special Administrative Regions of the People's Republic of China , the other being Macau. A city-state situated on China's south coast and enclosed by the Pearl River Delta and South China Sea, it is renowned for its expansive skyline and deep natural harbour...
, with an altitude of 957 m. It is located approximately at the geographical centre of the New Territories
New Territories
New Territories is one of the three main regions of Hong Kong, alongside Hong Kong Island and the Kowloon Peninsula. It makes up 86.2% of Hong Kong's territory. Historically, it is the region described in The Convention for the Extension of Hong Kong Territory...
.

Tai Mo Shan is made up of volcanic rocks of Jurassic
Jurassic
The Jurassic is a geologic period and system that extends from about Mya to  Mya, that is, from the end of the Triassic to the beginning of the Cretaceous. The Jurassic constitutes the middle period of the Mesozoic era, also known as the age of reptiles. The start of the period is marked by...
age. The volcanic rocks are mainly coarse ash crystal tuff
Tuff
Tuff is a type of rock consisting of consolidated volcanic ash ejected from vents during a volcanic eruption. Tuff is sometimes called tufa, particularly when used as construction material, although tufa also refers to a quite different rock. Rock that contains greater than 50% tuff is considered...
. To the northwest, the west and the south of the peak, the valleys contain large deposits of colluvium
Colluvium
Colluvium is the name for loose bodies of sediment that have been deposited or built up at the bottom of a low-grade slope or against a barrier on that slope, transported by gravity. The deposits that collect at the foot of a steep slope or cliff are also known by the same name. Colluvium often...
. The upper slopes are distinctly "ribbed", as is especially evident after a hill fire. These are stone terraces, running obliquely downhill to the valleys. It is also claimed to be Hong Kong's most misty area due to it being covered in clouds almost daily.

There are forest plantations in the southeastern part of the park. Limited by climatic and geographic factors, these plantations end at the 550 metre contour, above which shrub
Shrub
A shrub or bush is distinguished from a tree by its multiple stems and shorter height, usually under 5–6 m tall. A large number of plants may become either shrubs or trees, depending on the growing conditions they experience...
s and grasses dominate.

In the past, Tai Mo Shan was famous for a type of green tea
Green tea
Green tea is made solely from the leaves of Camellia sinensis that have undergone minimal oxidation during processing. Green tea originates from China and has become associated with many cultures throughout Asia. It has recently become more widespread in the West, where black tea is traditionally...
, called mist or cloud tea, which grew wild up on the mountain side. Occasionally, local people can still be seen picking the tea shoots for brewing green tea.

Some montane birds and rare species of snake
Snake
Snakes are elongate, legless, carnivorous reptiles of the suborder Serpentes that can be distinguished from legless lizards by their lack of eyelids and external ears. Like all squamates, snakes are ectothermic, amniote vertebrates covered in overlapping scales...
s and butterflies
Butterfly
A butterfly is a mainly day-flying insect of the order Lepidoptera, which includes the butterflies and moths. Like other holometabolous insects, the butterfly's life cycle consists of four parts: egg, larva, pupa and adult. Most species are diurnal. Butterflies have large, often brightly coloured...
breed here. There are also freshwater crabs, feral
Feral
A feral organism is one that has changed from being domesticated to being wild or untamed. In the case of plants it is a movement from cultivated to uncultivated or controlled to volunteer. The introduction of feral animals or plants to their non-native regions, like any introduced species, may...
dog
Dog
The domestic dog is a domesticated form of the gray wolf, a member of the Canidae family of the order Carnivora. The term is used for both feral and pet varieties. The dog may have been the first animal to be domesticated, and has been the most widely kept working, hunting, and companion animal in...
s, feral cat
Feral cat
A feral cat is a descendant of a domesticated cat that has returned to the wild. It is distinguished from a stray cat, which is a pet cat that has been lost or abandoned, while feral cats are born in the wild; the offspring of a stray cat can be considered feral if born in the wild.In many parts of...
s, oxen and wild boar.

A series of barbecue and picnic sites are provided along Route Twisk
Route Twisk
Route Twisk is a steep and tortuous dual-lane road in Hong Kong, linking Tsuen Wan and Pat Heung via Shek Kong. It joins Kam Tin Road and Lam Kam Road north in Kam Tin, and ends in the Tsuen Kam Interchange of Cheung Pei Shan Road, Texaco Road North, Wai Tsuen Road and Tai Ho Road North south in...
, the Shek Kong
Shek Kong
Shek Kong is an area north of Tai Mo Shan, located near Kam Tin and Pat Heung, New Territories, Hong Kong.Shek Kong Airfield is located in Shek Kong. A sizable Nepal Gurkha population presents in the area even after the withdrawal of British military....
- Pat Heung
Pat Heung
Pat Heung is an area in the middle of New Territories, Hong Kong. Located at the east of Kam Tin and north of Shek Kong, it is the exit to Sheung Shui and Fanling...
catchwater
Catchwater
A catchwater is a large-scale man-made device for catching surface runoff from hills and channelling it to reservoirs for later usage as a part of the public water supply....
and the Tuen Mun
Tuen Mun
Tuen Mun is a town near the mouth of Tuen Mun River and Castle Peak Bay in the New Territories, Hong Kong. It was one of the earliest settlements in Hong Kong which can be dated back to the Neolithic period. In the more recent past, it was home to many Tanka fishermen who gathered at the Castle...
catchwater.

The Rotary Park at Tai Mo Shan which has a car-park and extensive picnic facilities, is especially popular. Tourist groups often come here for a brief stop to enjoy the panoramic view. On a clear day even Lantau and its adjacent islands can be seen. Tai Mo Shan Visitor Centre is located not far away from the carpark, along Tai Mo Shan Road
Tai Mo Shan Road
Tai Mo Shan Road is a narrow road originating from Route Twisk, that leads to the weather station at the top of Tai Mo Shan. Paved the whole way, the upper-most ~3km is blocked by a manned barrier gate, and is hence inaccessible to cars. A carpark exists at this point...
, which leads to the weather station on the top of the mountain.

There is a Hiking Practice Trail for learning the techniques of hiking adjacent to the Tai Mo Shan car park. Those who would prefer short walks may visit the family walks in the park.

Visitors in country parks are asked to help keep the parks clean and prevent hill fires so that the facilities can be enjoyed by all. In 1986, a 34 hour blaze destroyed 282,500 trees at Shing Mun
Shing Mun
Shing Mun is an area between Tsuen Wan and Sha Tin in the New Territories of Hong Kong. It is formerly, as suggested by its Chinese characters, a gate between the two areas separated by a range of hills. The Shing Mun Valley carries water to Shing Mun River. Before the construction of Shing Mun...
and Tai Mo Shan and ravaged 7.40 km² of countryside. Fire is the greatest threat to the beauty of the country parks.

Servicing the entrance of Tai Mo Shan Country Park, is Route Twisk
Route Twisk
Route Twisk is a steep and tortuous dual-lane road in Hong Kong, linking Tsuen Wan and Pat Heung via Shek Kong. It joins Kam Tin Road and Lam Kam Road north in Kam Tin, and ends in the Tsuen Kam Interchange of Cheung Pei Shan Road, Texaco Road North, Wai Tsuen Road and Tai Ho Road North south in...
's route 51, operating between Tsuen Wan
Tsuen Wan
Tsuen Wan is a bay in the Kowloon area of Hong Kong, opposite to Tsing Yi Island across Rambler Channel. The market town of Tsuen Wan emerged for the surrounding villages and fleets of fishing boats in the area. The town is around the present-day Tsuen Wan Station of the MTR...
Nina Tower I
Nina Tower I
Nina Towers are a twin tower of 80-storey and 42-storey high-rise buildings in Tsuen Wan, New Territories, Hong Kong. The original design of this towers was just called Nina Tower and was supposed to be the tallest tower in the world at 518 m or 1,699 ft...
(near Tsuen Wan West MTR Station) and Kam Sheung Road MTR Station at approximately 30-minute intervals. The bus also stops at Tsuen Wan MTR Station. (HK$7.80)

Cyclists can sometimes be seen cycling up Tai Mo Shan on Route Twisk as part of their hill training regimen. The road is narrow at times and can be dangerous. In the winter, if the weather is cold there is frost on the top of the mountain, little icicles form on the trees. Temperatures can fall below 0 degrees Celsius.