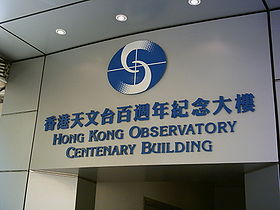 Hong Kong Observatory is a department of the Hong Kong government. The Observatory forecasts weather and issues warnings on weather-related hazards. It also monitors and makes assessments on radiation levels in Hong Kong and provides other meteorological and geophysical services to meet the needs of the public and the shipping, aviation, industrial and engineering sectors.

The Observatory was established in 1883 as Hong Kong Observatory by the 9th Governor of Hong Kong
Governor of Hong Kong
The Governor of Hong Kong was the head of the government of Hong Kong during British rule from 1843 to 1997. The governor's roles were defined in the Hong Kong Letters Patent and Royal Instructions...
George Bowen, with Dr. William Doberck as the first director of the Observatory. Early operations included meteorological and magnetic observations, a time service based on astronomical observations and a tropical cyclone
Tropical cyclone
A tropical cyclone is a storm system characterized by a large low-pressure center and numerous thunderstorms that produce strong winds and heavy rain. Tropical cyclones strengthen when water evaporated from the ocean is released as the saturated air rises, resulting in condensation of water vapor...
warning service. The Observatory was renamed Royal Observatory, Hong Kong after obtaining a Royal Charter
Royal Charter
A royal charter is a formal document issued by a monarch as letters patent, granting a right or power to an individual or a body corporate. They were, and are still, used to establish significant organizations such as cities or universities. Charters should be distinguished from warrants and...
in 1912. The Observatory was renamed again to its original name in 1997.

The Hong Kong Observatory was built in Tsim Sha Tsui
Tsim Sha Tsui
Tsim Sha Tsui , often abbreviated as TST, is an urbanized area in southern Kowloon, Hong Kong. The area is administratively part of the Yau Tsim Mong District. Tsim Sha Tsui East is a piece of land reclaimed from the Hung Hom Bay now east of Tsim Sha Tsui...
, Kowloon Peninsula
Kowloon Peninsula
The Kowloon Peninsula is a peninsula that forms the southern part of the main landmass in the territory of Hong Kong. The Kowloon Peninsula and the area of New Kowloon are collectively known as Kowloon....
in 1883. Observatory Road
Observatory Road
Observatory Road is one of the oldest roads in Hong Kong, and has existed since 1883. It is called so because this is where the Hong Kong Observatory was constructed...
in Tsim Sha Tsui is so named based on this landmark. The Observatory is now surrounded by skyscraper
Skyscraper
A skyscraper is a tall, continuously habitable building of many stories, often designed for office and commercial use. There is no official definition or height above which a building may be classified as a skyscraper...
s as a result of rapid urbanisation. However, it remains unrelocated. As a result of high greenhouse gas
Greenhouse gas
A greenhouse gas is a gas in an atmosphere that absorbs and emits radiation within the thermal infrared range. This process is the fundamental cause of the greenhouse effect. The primary greenhouse gases in the Earth's atmosphere are water vapor, carbon dioxide, methane, nitrous oxide, and ozone...
emission, the reflection of sunlight off buildings and the surfaces of roads, as well as the reducing vegetation, the location suffers from the heat island effect. Average temperatures recorded by the Observatory saw a large increase from 1980 to 2005. In 2002, the Observatory opened its resource center on the 23rd Floor of the nearby Miramar Tower, where the public can buy the Hong Kong Observatory publications and access other meteorological information.


Buildings in the Observatory

This building, built in 1883, is a rectangular two-storey plastered brick structure; it is characterised by arched windows and long verandas. It now houses the office of the directorate and to serve as a centre of administration of the Observatory.

It is next to the 1883 Building; the Centenary Building, used as The Hong Kong Observatory Headquarters, was erected in 1983 as a commemoration of the centennial service of the Observatory.

The Observatory regularly organises visits for the secondary school students. This outreach programme was extended to primary school students, the elderly and the community groups in the recent years. Talks are also organised in primary school during the winter time, when the officials are less busy in the severe climate issues and watchouts. A roving exhibition for the public was also mounted in shopping malls in 2003. To promote understanding of the services provided by the Observatory and their benefits to the community, over 50 press releases were issued and 7 media briefings were held in 2003.