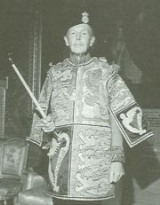 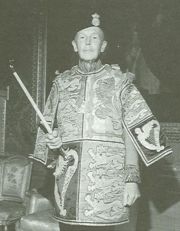 A tabard (from the French tabarde) was originally a humble outer garment of tunic form, generally without sleeves, worn by peasants, monks and foot-soldiers, including Chaucer's ploughman. In this sense the first Oxford English Dictionary
Oxford English Dictionary
The Oxford English Dictionary , published by the Oxford University Press, is the self-styled premier dictionary of the English language. Two fully bound print editions of the OED have been published under its current name, in 1928 and 1989. The first edition was published in twelve volumes , and...
citation is 1300. The Tabard
The Tabard
The Tabard, an inn that stood on the east side of Borough High Street in Southwark, was established in 1307, when the abbot of Hyde purchased the land to construct a hostel for himself and his brethren, when business took them to London, as well as an inn to accommodate the numerous pilgrims headed...
is the inn at which the principals meet in that same Prologue.

In the late Middle Ages
Middle Ages
The Middle Ages is a periodization of European history from the 5th century to the 15th century. The Middle Ages follows the fall of the Western Roman Empire in 476 and precedes the Early Modern Era. It is the middle period of a three-period division of Western history: Classic, Medieval and Modern...
tabards, now open at the sides and so usually belted, were worn by knight
Knight
A knight was a member of a class of lower nobility in the High Middle Ages.By the Late Middle Ages, the rank had become associated with the ideals of chivalry, a code of conduct for the perfect courtly Christian warrior....
s over their armour
Armour
Armour or armor is protective covering used to prevent damage from being inflicted to an object, individual or a vehicle through use of direct contact weapons or projectiles, usually during combat, or from damage caused by a potentially dangerous environment or action...
, and usually emblazoned with their arms (though sometimes worn plain). The Oxford English dictionary first records this use in English in 1450. In this meaning they were apparently distinguished from surcoat
Surcoat
A surcoat was an outer garment commonly worn in the Middle Ages by both men and women. It can either refer to a coat worn over other garments or the outer garment of a person...
s by being open at the side, and by being shorter. These became an important means of battlefield identification with the development of plate armor as the use of shields declined.

A very expensive, but plain, garment described as a tabard is worn by Giovanni Arnolfini
Giovanni Arnolfini
Giovanni di Nicolao Arnolfini was a merchant from Lucca, a city in Tuscany, Italy.Giovanni, called here di Nicolao or son of Nicolao to distinguish him from his cousin Giovanni di Arrigo Arnolfini , moved to Bruges in Flanders at an early age to work in the family business and lived there for the...
in the Arnolfini Portrait
Arnolfini portrait
The Arnolfini Portrait is an oil painting on oak panel dated 1434 by the Early Netherlandish painter Jan van Eyck. It is also known as The Arnolfini Wedding, The Arnolfini Marriage, The Arnolfini Double Portrait or the Portrait of Giovanni Arnolfini and his Wife, among other titles...
of 1434 (National Gallery, London
National Gallery, London
The National Gallery is an art museum on Trafalgar Square, London, United Kingdom. Founded in 1824, it houses a collection of over 2,300 paintings dating from the mid-13th century to 1900. The gallery is an exempt charity, and a non-departmental public body of the Department for Culture, Media...
). This may be made of silk
Silk
Silk is a natural protein fiber, some forms of which can be woven into textiles. The best-known type of silk is obtained from the cocoons of the larvae of the mulberry silkworm Bombyx mori reared in captivity...
velvet
Velvet
Velvet is a type of woven tufted fabric in which the cut threads are evenly distributed,with a short dense pile, giving it a distinctive feel.The word 'velvety' is used as an adjective to mean -"smooth like velvet".-Composition:...
and is trimmed and fully lined with fur, possibly sable
Sable
The sable is a species of marten which inhabits forest environments, primarily in Russia from the Ural Mountains throughout Siberia, in northern Mongolia and China and on Hokkaidō in Japan. Its range in the wild originally extended through European Russia to Poland and Scandinavia...
.

Similarly at Queens College
The Queen's College, Oxford
The Queen's College, founded 1341, is one of the constituent colleges of the University of Oxford in England. Queen's is centrally situated on the High Street, and is renowned for its 18th-century architecture...
, Oxford
Oxford
The city of Oxford is the county town of Oxfordshire, England. The city, made prominent by its medieval university, has a population of just under 165,000, with 153,900 living within the district boundary. It lies about 50 miles north-west of London. The rivers Cherwell and Thames run through...
, the scholars on the foundation were called tabarders, from the tabard, obviously not an emblazoned garment, which they wore.

In the case of Royal officers of arms, the tabard is emblazoned with the coat of arms of the sovereign. Private officers of arms
Private Officer of Arms
A private officer of arms is one of those heralds and pursuivants appointed by great noble houses to handle all heraldic and genealogical questions.-History:...
, such as still exist in Scotland
Scotland
Scotland is a country that is part of the United Kingdom. Occupying the northern third of the island of Great Britain, it shares a border with England to the south and is bounded by the North Sea to the east, the Atlantic Ocean to the north and west, and the North Channel and Irish Sea to the...
, likewise make use of tabards emblazoned with the coat of arms of the person who employs them. In the United Kingdom
United Kingdom
The United Kingdom of Great Britain and Northern IrelandIn the United Kingdom and Dependencies, other languages have been officially recognised as legitimate autochthonous languages under the European Charter for Regional or Minority Languages...
the different ranks of officers of arms can be distinguished by the fabric from which their tabards are made. The tabard of a king of arms
King of Arms
King of Arms is the senior rank of an officer of arms. In many heraldic traditions, only a king of arms has the authority to grant armorial bearings. In other traditions, the power has been delegated to other officers of similar rank.-Heraldic duties:...
is made of velvet
Velvet
Velvet is a type of woven tufted fabric in which the cut threads are evenly distributed,with a short dense pile, giving it a distinctive feel.The word 'velvety' is used as an adjective to mean -"smooth like velvet".-Composition:...
, the tabard of a herald of arms
Herald
A herald, or, more correctly, a herald of arms, is an officer of arms, ranking between pursuivant and king of arms. The title is often applied erroneously to all officers of arms....
of satin
Satin
Satin is a weave that typically has a glossy surface and a dull back. It is a warp-dominated weaving technique that forms a minimum number of interlacings in a fabric. If a fabric is formed with a satin weave using filament fibres such as silk, nylon, or polyester, the corresponding fabric is...
and that of a pursuivant of arms
Pursuivant
A pursuivant or, more correctly, pursuivant of arms, is a junior officer of arms. Most pursuivants are attached to official heraldic authorities, such as the College of Arms in London or the Court of the Lord Lyon in Edinburgh. In the mediaeval era, many great nobles employed their own officers of...
of damask silk
Silk
Silk is a natural protein fiber, some forms of which can be woven into textiles. The best-known type of silk is obtained from the cocoons of the larvae of the mulberry silkworm Bombyx mori reared in captivity...
. It was once the custom for pursuivants to wear their tabards with the sleeves at the front and back, but this practice was ended during the reign of James II and VII
James II of England
James II & VII was King of England and King of Ireland as James II and King of Scotland as James VII, from 6 February 1685. He was the last Catholic monarch to reign over the Kingdoms of England, Scotland, and Ireland...
.
The source of this article is wikipedia, the free encyclopedia.  The text of this article is licensed under the GFDL.