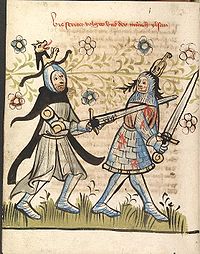 A surcoat was an outer garment commonly worn in the Middle Ages
Middle Ages
The Middle Ages is a periodization of European history from the 5th century to the 15th century. The Middle Ages follows the fall of the Western Roman Empire in 476 and precedes the Early Modern Era. It is the middle period of a three-period division of Western history: Classic, Medieval and Modern...
by both men and women. It can either refer to a coat worn over other garments or the outer garment of a person. The name derives from French
French language
French is a Romance language spoken as a first language in France, the Romandy region in Switzerland, Wallonia and Brussels in Belgium, Monaco, the regions of Quebec and Acadia in Canada, and by various communities elsewhere. Second-language speakers of French are distributed throughout many parts...
meaning "over the cotta", a long, wide coat reaching down to the feet without sleeves.

In the 15th century, once suits of plate armour became common, the surcoat was phased out of use. The period in the history of armour development in which surcoats first generally become rare is referred to as the "surcoatless period" (1420-1485).