The Palace Embankment is a very popular street among tourists, as it has a wonderful view of the Neva, the Peter and Paul Fortress
Peter and Paul Fortress
The Peter and Paul Fortress is the original citadel of St. Petersburg, Russia, founded by Peter the Great in 1703 and built to Domenico Trezzini's designs from 1706-1740.-History:...
and Vasilievsky Island
Vasilievsky Island
Vasilyevsky Island is an island in Saint Petersburg, Russia, bordered by the rivers Bolshaya Neva and Malaya Neva in the south and northeast, and by the Gulf of Finland in the west. Vasilyevsky Island is separated from Dekabristov Island by the Smolenka River...
. Many sightseeing boats are available for hire there. 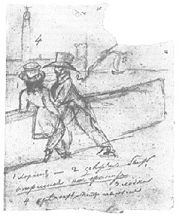 For the first edition of this chapter, the poet commissioned an illustration depicting him and Onegin walking together along the quay. Upon receiving the illustration, which represented him leaning on a parapet with his back turned towards the Peter and Paul Fortress, he was exceedingly displeased with the result (which had little in common with his own preliminary sketch, illustrated to the right) and scribbled the following epigram
Epigram
An epigram is a brief, interesting, usually memorable and sometimes surprising statement. Derived from the epigramma "inscription" from ἐπιγράφειν epigraphein "to write on inscribe", this literary device has been employed for over two millennia....
underneath:
(translated by Vladimir Nabokov
Vladimir Nabokov
Vladimir Vladimirovich Nabokov was a multilingual Russian novelist and short story writer. Nabokov wrote his first nine novels in Russian, then rose to international prominence as a master English prose stylist...
)
The source of this article is wikipedia, the free encyclopedia.  The text of this article is licensed under the GFDL.