Encyclopedia
Suez is a seaport city (population ca. 497,000) in north-eastern Egypt
Egypt
Egypt , officially the Arab Republic of Egypt, Arabic: , is a country mainly in North Africa, with the Sinai Peninsula forming a land bridge in Southwest Asia. Egypt is thus a transcontinental country, and a major power in Africa, the Mediterranean Basin, the Middle East and the Muslim world...
, located on the north coast of the Gulf of Suez
Gulf of Suez
The northern end of the Red Sea is bifurcated by the Sinai Peninsula, creating the Gulf of Suez in the west and the Gulf of Aqaba to the east. The Gulf of Suez is formed within a relatively young, but now inactive rift basin, the Gulf of Suez Rift, dating back about 28 million years...
(a branch of the Red Sea
Red Sea
The Red Sea is a seawater inlet of the Indian Ocean, lying between Africa and Asia. The connection to the ocean is in the south through the Bab el Mandeb strait and the Gulf of Aden. In the north, there is the Sinai Peninsula, the Gulf of Aqaba, and the Gulf of Suez...
), near the southern terminus of the Suez Canal
Suez Canal
The Suez Canal , also known by the nickname "The Highway to India", is an artificial sea-level waterway in Egypt, connecting the Mediterranean Sea and the Red Sea. Opened in November 1869 after 10 years of construction work, it allows water transportation between Europe and Asia without navigation...
, having the same boundaries as Suez governorate
As Suways Governorate
Suez Governorate is one of the governorates of Egypt. It is located in the north-eastern part of the country and is coterminous with the city of Suez...
. It has three harbors, Adabya, Ain Sokhna and Port Tawfiq, and extensive port facilities. Together they form a metropolitan area
Metropolitan area
The term metropolitan area refers to a region consisting of a densely populated urban core and its less-populated surrounding territories, sharing industry, infrastructure, and housing. A metropolitan area usually encompasses multiple jurisdictions and municipalities: neighborhoods, townships,...
.
Railway lines and highways connect the city with Cairo
Cairo
Cairo , is the capital of Egypt and the largest city in the Arab world and Africa, and the 16th largest metropolitan area in the world. Nicknamed "The City of a Thousand Minarets" for its preponderance of Islamic architecture, Cairo has long been a centre of the region's political and cultural life...
, Port Said
Port Said
Port Said is a city that lies in north east Egypt extending about 30 km along the coast of the Mediterranean Sea, north of the Suez Canal, with an approximate population of 603,787...
, and Ismailia
Ismaïlia
-Notable natives:*Osman Ahmed Osman, a famous and influential Egyptian engineer, contractor, entrepreneur, and politician, was born in this town on 6 April 1917....
. Suez has a petrochemical plant, and its oil refineries have pipelines carrying the finished product to Cairo.

Suez is a way station for Muslim pilgrims
Hajj
The Hajj is the pilgrimage to Mecca, Saudi Arabia. It is one of the largest pilgrimages in the world, and is the fifth pillar of Islam, a religious duty that must be carried out at least once in their lifetime by every able-bodied Muslim who can afford to do so...
travelling to and from Mecca
Mecca
Mecca is a city in the Hijaz and the capital of Makkah province in Saudi Arabia. The city is located inland from Jeddah in a narrow valley at a height of above sea level...
.

In the 7th century a town (known as Clysma or Kolzum) near the site of present-day Suez was the eastern terminus of a canal linking the Nile River and the Red Sea
Red Sea
The Red Sea is a seawater inlet of the Indian Ocean, lying between Africa and Asia. The connection to the ocean is in the south through the Bab el Mandeb strait and the Gulf of Aden. In the north, there is the Sinai Peninsula, the Gulf of Aqaba, and the Gulf of Suez...
. In the 16th century Suez was a Turkish naval station.

Its importance as a port increased after the Suez Canal opened in 1869. The city was virtually destroyed during battles in the late 1960s and early 1970s between Egyptian and Israeli forces occupying the Sinai Peninsula
Sinai Peninsula
The Sinai Peninsula or Sinai is a triangular peninsula in Egypt about in area. It is situated between the Mediterranean Sea to the north, and the Red Sea to the south, and is the only part of Egyptian territory located in Asia as opposed to Africa, effectively serving as a land bridge between two...
. The town was deserted following the Six Day War in 1967. Reconstruction of Suez began soon after Egypt reopened the Suez Canal, following the October War
Yom Kippur War
The Yom Kippur War, Ramadan War or October War , also known as the 1973 Arab-Israeli War and the Fourth Arab-Israeli War, was fought from October 6 to 25, 1973, between Israel and a coalition of Arab states led by Egypt and Syria...
with Israel.

Suez saw major protests, including high levels of violence, during the Egyptian Revolution of 2011. On account of this, it has been called the Sidi Bouzid of Egypt, recalling that small town's role in the 2010–2011 Tunisian revolution. 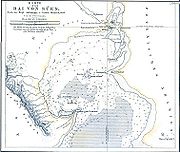 There was a canal from the Nile delta to the Gulf of Suez in ancient times, when the gulf extended further north than it does today. This fell into disuse, and the present canal was built in the nineteenth century.

The Suez Canal offers a significantly shorter passage for ships than passing round the Cape of Good Hope. The construction of the Suez Canal was favoured by the natural conditions of the region: the comparatively short distance between the Mediterranean and the Red Sea, the occurrence of a line of lakes or depressions which became lakes (Lake Manzala in the north, and depressions, Timsah and the Bitter Lakes, part way along the route), and the generally flat terrain. The construction of the canal was proposed by the engineer and French diplomat Ferdinand de Lesseps, who acquired from Said Pasha the rights of constructing and operating the canal for a period of 99 years. The Compagnie Universelle du Canal Maritime de Suez was formed. Construction took 11 years, and the canal opened on 17 November 1869. The canal had an immediate and dramatic effect on world trade.

In 1956 Egyptian president Gamal Abdel Nasser
Gamal Abdel Nasser
Gamal Abdel Nasser Hussein was the second President of Egypt from 1956 until his death. A colonel in the Egyptian army, Nasser led the Egyptian Revolution of 1952 along with Muhammad Naguib, the first president, which overthrew the monarchy of Egypt and Sudan, and heralded a new period of...
nationalised the canal, provoking the Suez Crisis
Suez Crisis
The Suez Crisis, also referred to as the Tripartite Aggression, Suez War was an offensive war fought by France, the United Kingdom, and Israel against Egypt beginning on 29 October 1956. Less than a day after Israel invaded Egypt, Britain and France issued a joint ultimatum to Egypt and Israel,...
. Following the Arab-Israeli war of 1967, the canal was closed, and reopened in 1975.

Today, the canal is a vital link in world trade, and contributes significantly to the Egyptian economy; in 2009 the income generated from the canal accounted for 3.7% of Egypt's GDP.

Suez is twinned
Town twinning
Twin towns and sister cities are two of many terms used to describe the cooperative agreements between towns, cities, and even counties in geographically and politically distinct areas to promote cultural and commercial ties.- Terminology :...
with: Skopje
Skopje
Skopje is the capital and largest city of the Republic of Macedonia with about a third of the total population. It is the country's political, cultural, economic, and academic centre...
, Macedonia
The source of this article is wikipedia, the free encyclopedia.  The text of this article is licensed under the GFDL.