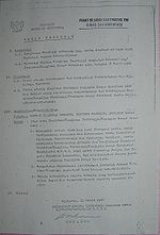 Encyclopedia
The Supersemar, the Indonesian
Indonesian language
Indonesian is the official language of Indonesia. Indonesian is a normative form of the Riau Islands dialect of Malay, an Austronesian language which has been used as a lingua franca in the Indonesian archipelago for centuries....
abbreviation for Surat Perintah Sebelas Maret (Order of March the Eleventh) was a document signed by the Indonesia
Indonesia
Indonesia , officially the Republic of Indonesia , is a country in Southeast Asia and Oceania. Indonesia is an archipelago comprising approximately 13,000 islands. It has 33 provinces with over 238 million people, and is the world's fourth most populous country. Indonesia is a republic, with an...
n President Sukarno
Sukarno
Sukarno, born Kusno Sosrodihardjo was the first President of Indonesia.Sukarno was the leader of his country's struggle for independence from the Netherlands and was Indonesia's first President from 1945 to 1967...
on March 11, 1966, giving the Army commander Lt. Gen. Suharto authority to take whatever measures he "deemed necessary" to restore order to the chaotic situation during the Indonesian killings of 1965–66
Indonesian killings of 1965–66
The Indonesian killings of 1965–1966 were an anti-communist purge following a failed coup in Indonesia. The most widely accepted estimates are that over half a million people were killed...
. The abbreviation "Supersemar" is a play on the name of Semar
Semar
Semar is a character in Javanese mythology who frequently appears in wayang shadow plays. He is one of the punokawan , but is in fact divine and very wise. He is the dhanyang of Java, and is regarded by some as the most sacred figure of the kotak...
, the mystic and powerful figure who commonly appears in Javanese wayang
Wayang
Wayang is a Javanese word for theatre . When the term is used to refer to kinds of puppet theatre, sometimes the puppet itself is referred to as wayang...
puppet shows. The invocation of Semar was presumably intended to help draw on Javanese mythology to lend support to Suharto's legitimacy during the period of the transition of authority from Sukarno to Suharto.

In effect, the Supersemar came to be seen as key instrument of the transfer of executive power from Sukarno to Suharto. 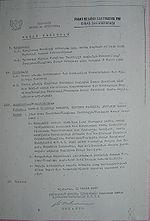 On September 30, 1965, a group calling itself the 30 September Movement
30 September Movement
The Thirtieth of September Movement ) was a self-proclaimed organization of Indonesian National Armed Forces members who, in the early hours of 1 October 1965, assassinated six Indonesian Army generals in an abortive coup d'état. Later that morning, the organization declared that it was in control...
killed six senior Army generals, seized control of the center of Jakarta
Jakarta
Jakarta is the capital and largest city of Indonesia. Officially known as the Special Capital Territory of Jakarta, it is located on the northwest coast of Java, has an area of , and a population of 9,580,000. Jakarta is the country's economic, cultural and political centre...
and issued a number of decrees over Republic of Indonesia Radio. Suharto and his allies defeated the movement, but Sukarno was fatally weakened. The Army accused its long standing rival, the Indonesian Communist Party (PKI), of being behind the "coup attempt" and an anti-Communist purge
Indonesian killings of 1965–66
The Indonesian killings of 1965–1966 were an anti-communist purge following a failed coup in Indonesia. The most widely accepted estimates are that over half a million people were killed...
ensued. Over the next few months, Suharto and the army seized the initiative, and during a cabinet meeting (which Suharto did not attend), troops without insignia surrounded the presidential palace where the meeting was being held. Sukarno was advised to leave the meeting, and did so, flying to the presidential palace in Bogor
Bogor
Bogor is a city on the island of Java in the West Java province of Indonesia. The city is located in the center of the Bogor Regency , 60 kilometers south of the Indonesian capital Jakarta...
, 60 km south of Jakarta, by helicopter. Later that afternoon, three Army generals, Maj. Gen. Basuki Rahmat
Basuki Rahmat
Basuki Rahmat was an Indonesian General and a witness to the signing of the Supersemar document transferring power from President Sukarno to General Suharto.-Early life:...
, Minister for Veteran Affairs, Brig. Gen. M Jusuf, Minister for Basic Industry and Brig. Gen. Amirmachmud
Amirmachmud
Amirmachmud was an Indonesian Military General who was an eyewitness to the signing of the Supersemar document transferring power from President Sukarno to General Suharto.-Early life:...
, Commander of the V/Jaya Jakarta Military Area Command, visited Sukarno and came away with the signed Supersemar, which they then presented to Suharto. The next day, Suharto used the powers thus conferred on him to ban the PKI, and on March 18, fifteen Sukarno loyalist ministers were arrested. Suharto changed the composition of the Provisional People's Consultative Assembly (MPRS), and in March 1967 it voted to strip Sukarno of his powers and appointed Suharto acting president. In 1968, the MPRS removed the word 'acting', and Suharto remained in power until toppled by the Indonesian Revolution of 1998
Indonesian Revolution of 1998
Suharto retired as president of Indonesia in May 1998 following the collapse of support for his three-decade long presidency. The resignation followed severe economic and political crises in the previous 6 to 12 months. BJ Habibie continued at least a year of his remaining presidential years,...
.

The Supersemar itself is a simple document of less than 200 words. It reads as follows:

PRESIDENT OF THE REPUBLIC OF INDONESIA

1.1 The current state of the Revolution, together with the national and international political situation

2.1 The need for calm and stability of the Government and the progress of the Revolution

To: In the name of the President/Supreme Commander/Great Leader of the Revolution

2. Coordinate the execution of orders with the commanders of the other forces to the best of his ability.

3. Report all actions related to duties and responsibilities as stated above.


The circumstances surrounding the signing of the Supersemar

Indonesians usually end documents with the place the document was signed and the date. Given that the Supersemar was supposedly signed in Bogor, it is odd that the Supersemar is signed "Djakarta". In his account of the events of March 1966, Hanafi, a close friend of Sukarno and ambassador to Cuba
Cuba
The Republic of Cuba is an island nation in the Caribbean. The nation of Cuba consists of the main island of Cuba, the Isla de la Juventud, and several archipelagos. Havana is the largest city in Cuba and the country's capital. Santiago de Cuba is the second largest city...
says that he went to Bogor on March 12 and met with Sukarno. He says that Sukarno told him Suharto had sent three generals with a document they had already prepared for him to sign. He says that Sukarno felt he had to sign it because he was in a tight spot, but that the generals had promised to defend Sukarno and that the order would not be misused. However, Martoidjojo, the commander of the presidential bodyguard, who went with Sukarno in the helicopter to Bogor, says that the Supersemar was typed in Bogor by Sukarno's adjutant and military secretary, Brig. Gen. Mochammed Sabur. Djamaluddin corroborates this.

The wording of the Supersemar itself could be read as a threat, namely the section reading "to guarantee the personal safety and authority of the leadership of Sukarno. However, in 1998, accusations appeared of an even more direct threat, namely that two members of the presidential guard had seen Gen. M. Jusuf and Gen M. Panggabean, second assistant to the Army minister, pointing their pistols at Sukarno. M. Jusuf and others have denied this, and that Panggabean was even present. They called into doubt the credibility of key parts of the accusations, and said it was impossible for the two men to be so close to the president at the time.


The disappearance of the original

One of the most obvious oddities regarding the Supersemar is that the original document can no longer be traced. Although Indonesia was in a fairly chaotic state at the time, it is surprising that more care was not taken to preserve a document that school history books cite as the legitimization of Suharto's ensuing actions. After all, the original document of the Indonesian Declaration of Independence
Indonesian Declaration of Independence
The Proclamation of Indonesian Independence was read at 10.00 a.m. on Friday, August 17, 1945. The declaration marked the start of the diplomatic and armed-resistance of the Indonesian National Revolution, fighting against the forces of the Netherlands until the latter officially acknowledged...
is still preserved.


The existence of multiple versions 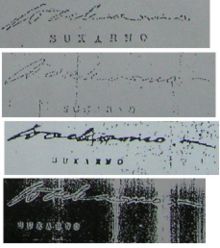 One of the publications to appear since the fall of Suharto alleges that there were several versions of the Supersemar (Center for Information Analysis 1999). Even before the fall of Suharto, an official publication commemorating 30 years of Indonesian independence reproduced one version of Supersemar, while an officially sanctioned high school history textbook featured a different version.

There are a number of differences between the various versions of the Supersemar:

The Order of March 13

According to Hanafi, in his discussions with Sukarno at the Bogor Palace on March 12, Sukarno was angry that the Supersemar had been used to ban the PKI, as it was the prerogative of the president to ban political parties. He said he had asked Third Deputy Prime Minister Johannes Leimena
Johannes Leimena
Dr. Johannes Leimena was Deputy Prime Minister of Indonesia from 1957 - 1966 and served as Minister of Health under President Sukarno from 1946 - 1956. A Christian, he founded the Indonesian Christian Party in 1950...
to take a written order to Suharto, and that he would wait to see what Suharto's reaction was – whether he would obey it or not. He asked Hanafi to help Third Deputy Prime Minister Chaerul Saleh and First Deputy Prime Minister Subandrio The two men showed Hanafi the "Order of March 13", which stated that the Order of March 11 was technical and administrative in nature, not political, warned General Suharto that he was not to take any actions outside the scope of the order and asked Suharto to report to the president at the palace. Saleh planned to make copies of the order and distribute them to loyal members of the palace guard and to Sukarno's young followers. Hanafi says 5,000 copies were made, and that he took a few back to Jakarta with him, but he does not know what happened to the others.

In the official biography of Suharto, it is also said that Sukarno questioned Suharto's use of the Supersemar and sent Leimena to ask Suharto to take responsibility for his actions. Saelan, deputy commander of the presidential guard says Suharto ignored the order, and Hanafi says that Suharto sent a message back via Leimena, who returned to Bogor later that evening, saying he would take responsibility for his actions, and that he was unable to come to Bogor as he was due to attend a meeting of all the military commanders at 11am the following day, to which he invited Sukarno. Incidentally, Hanafi is ambiguous as to the dates in his account, as he says he was in Bogor on March 12, but the "correction" to the Supersemar was known as the Order of March 13.
The source of this article is wikipedia, the free encyclopedia.  The text of this article is licensed under the GFDL.