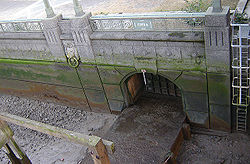 The subterranean or underground rivers of London are the tributaries of the River Thames
River Thames
The River Thames flows through southern England. It is the longest river entirely in England and the second longest in the United Kingdom. While it is best known because its lower reaches flow through central London, the river flows alongside several other towns and cities, including Oxford,...
and River Lea that were built over during the growth of the metropolis of London
London
London is the capital city of :England and the :United Kingdom, the largest metropolitan area in the United Kingdom, and the largest urban zone in the European Union by most measures. Located on the River Thames, London has been a major settlement for two millennia, its history going back to its...
. Since it is difficult to stop water from flowing downhill, the rivers now flow through underground culvert
Culvert
A culvert is a device used to channel water. It may be used to allow water to pass underneath a road, railway, or embankment. Culverts can be made of many different materials; steel, polyvinyl chloride and concrete are the most common...
s.

Many London localities started their existence as small villages along these rivers, and their place names reflect their origin. In recent years, parts of some London rivers have been restored to their previous above-ground state, and in some cases fish have been reintroduced. In June 2008 outline plans to reinstate some underground rivers were published by the office of Mayor of London, and in January 2009 a partnership between the Environment Agency
Environment Agency
The Environment Agency is a British non-departmental public body of the Department for Environment, Food and Rural Affairs and an Assembly Government Sponsored Body of the Welsh Assembly Government that serves England and Wales.-Purpose:...
, Natural England
Natural England
Natural England is the non-departmental public body of the UK government responsible for ensuring that England's natural environment, including its land, flora and fauna, freshwater and marine environments, geology and soils, are protected and improved...
and the Greater London Authority
Greater London Authority
The Greater London Authority is the top-tier administrative body for Greater London, England. It consists of a directly elected executive Mayor of London, currently Boris Johnson, and an elected 25-member London Assembly with scrutiny powers...
set out a strategy for putting this into effect by creating the River Restoration Centre. 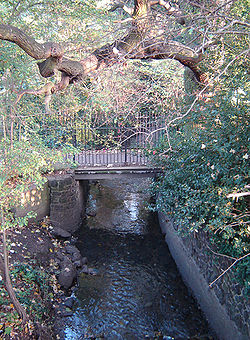 An article on London's Lost Rivers
mentions a Langbourne as running along Fenchurch Street
Fenchurch Street
Fenchurch Street is a street in the City of London home to a number of shops, pubs and offices. It links Aldgate at its eastern end with Lombard Street and Gracechurch Street to the west. To the south of Fenchurch Street and towards its eastern end is Fenchurch Street railway station...
, Lombard Street
Lombard Street, London
Lombard Street is a street in the City of London.It runs from the corner of the Bank of England at its north-west end, where it meets a major junction including Poultry, King William Street, and Threadneedle Street, south-east to Gracechurch Street....
, and Sherbourn Lane, but gives no further details. This route looks unlikely, running parallel with, but in the opposite direction to, the Thames. Whatever it was, it has given its name to the Langbourn
Langbourn
Langbourn is one of the 25 ancient wards in the City of London. It reputably is named after a supposed buried stream in the vicinity.It is a small ward; a long thin area, in shape similar to a left pointing arrow...
ward
Wards of the City of London
The City of London , in the United Kingdom, is constituted of 25 wards. The City is the historic core of the much wider metropolis of London, with an ancient and sui generis form of local government, which avoided the many reforms enacted to local government elsewhere in the country in the 19th and...
of the City of London
City of London
The City of London is a small area within Greater London, England. It is the historic core of London around which the modern conurbation grew and has held city status since time immemorial. The City’s boundaries have remained almost unchanged since the Middle Ages, and it is now only a tiny part of...
. One possibility is that it was a medieval euphemism for the open sewers that ran along these streets.

The article also mentions a St Clement’s (as in the Oranges and Lemons
Oranges and Lemons
"Oranges and Lemons" is an English nursery rhyme and singing game which refers to the bells of several churches, all within or close to the City of London. It is listed in the Roud Folk Song Index as #3190.-Lyrics:Common modern versions include:...
song) stream. This would presumably be in Clement's Lane, which runs south from Lombard Street. This may have been another open sewer. Likewise for the Oldbourne (or Holbourne) cited as alternative names for the Fleet
River Fleet
The River Fleet is the largest of London's subterranean rivers. Its two headwaters are two streams on Hampstead Heath; each is now dammed into a series of ponds made in the 18th century, the Hampstead Ponds and the Highgate Ponds. At the south edge of Hampstead Heath these two streams flow...
.

On the south bank the next river upstream from the Effra is the Falconbrook, also underground. The next river is the Wandle
River Wandle
The River Wandle is a river in south-east England. The names of the river and of Wandsworth are thought to have derived from the Old English "Wendlesworth" meaning "Wendle's Settlement". The river runs through southwest London and is about long...
, which is not subterranean. To quote from an article formerly on the London Borough of Sutton
London Borough of Sutton
The London Borough of Sutton is a London borough in South London, England and forms part of Outer London. It covers an area of and is the 80th largest local authority in England by population. It is one of the southernmost boroughs of London...
website: "Today most of London’s Thames tributaries flow underground or are imprisoned in concrete. The Wandle remains one of the few that are accessible for most of its length." The River Brent
River Brent
The Brent is a river within Greater London which is a tributary of the River Thames. It is 17.9 miles long, running north-east to south-west, and it joins the Thames on the Tideway at Brentford, Hounslow.- Hydronymy and etymology :...
is also above ground for most of its course.

The subterranean rivers of London are mentioned in several novels, including Thrones, Dominations
Thrones, Dominations
Thrones, Dominations is a Lord Peter Wimsey murder mystery novel that Dorothy L. Sayers began writing but abandoned, and which remained as fragments and notes at her death. It was completed by Jill Paton Walsh and published in 1998...
(by Dorothy L. Sayers
Dorothy L. Sayers
Dorothy Leigh Sayers was a renowned English crime writer, poet, playwright, essayist, translator and Christian humanist. She was also a student of classical and modern languages...
and Jill Paton Walsh
Jill Paton Walsh
Jill Paton Walsh, CBE, FRSL is an English novelist and children's writer.Born as Gillian Bliss and educated at St. Michael's Convent, North Finchley, London, she read English Literature at St Anne's College, Oxford...
), where a character remarks "You can bury them deep under, sir; you can bind them in tunnels, ... but in the end where a river has been, a river will always be."

One story arc of the comic book Hellblazer
Hellblazer
Hellblazer is a contemporary horror comic book series, originally published by DC Comics, and subsequently by the Vertigo imprint since March 1993, the month the imprint was introduced, where it remains to this day...
features the rivers as a major plot point.

A London subterranean river, used as a sewer, is visited briefly in Neil Gaiman
Neil Gaiman
Neil Richard Gaiman born 10 November 1960)is an English author of short fiction, novels, comic books, graphic novels, audio theatre and films. His notable works include the comic book series The Sandman and novels Stardust, American Gods, Coraline, and The Graveyard Book...
's Neverwhere
Neverwhere
Neverwhere is an urban fantasy television series by Neil Gaiman that first aired in 1996 on BBC Two. The series is set in "London Below", a magical realm coexisting with the more familiar London, referred to as "London Above". It was devised by Neil Gaiman and Lenny Henry, and directed by Dewi...
. Croup and Vandemar, the story's two major antagonists, dump the body of the Marquis de Carabas
Marquis de Carabas
-Fictional characters:* A fictional nobleman in the fairy tale Puss in Boots* A character in the BBC TV series and later novel Neverwhere* A character in the webcomic No Rest for the Wicked...
in the river, and lament on how the people above will never get to see the craftsmanship of the tunnel that was built over it.

The River Tyburn makes an appearance in Ironhand, the second book of the Stoneheart trilogy, by Charlie Fletcher.

The Bryant and May series of mystery novels by Christopher Fowler
Christopher Fowler
Christopher Fowler is an English thriller writer. In addition to his numerous horror, satire and crime novels, he has also written a Sherlock Holmes audio drama for BBC 7 entitled The Lady Downstairs...
all deal with London history and trivia. In particular, The Water Room includes a mystery which is directly linked to the paths of London's underground rivers, culminating in a chase through the sewers and ending in a giant underground chamber, hidden since Victorian times, and filled with illegal immigrants.

These rivers play an important role in The Tiger in the Well
The Tiger in the Well
The Tiger in the Well is a book by the English author Philip Pullman.-Plot:This book takes place in the autumn of 1881. Sally Lockhart has a daughter named Harriet, a nurse named Sarah-Jane and a cook named Ellie. Her friends Webster, Jim and Charles are in South America taking pictures. One day a...
, the last Sally Lockhart
Sally Lockhart
Veronica Beatrice "Sally" Lockhart is a fictional character in a series of books by Philip Pullman.- Background :The character of Sally Lockhart first appears in The Ruby in the Smoke, a play Pullman wrote for performance by a secondary school. In the play, sixteen-year-old Sally Lockhart attempts...
mystery in Philip Pullman
Philip Pullman
Philip Pullman CBE, FRSL is an English writer from Norwich. He is the best-selling author of several books, most notably his trilogy of fantasy novels, His Dark Materials, and his fictionalised biography of Jesus, The Good Man Jesus and the Scoundrel Christ...
's trilogy. In Rivers of London
Rivers of London (novel)
Rivers of London is the first novel in the series of the same name by English author Ben Aaronovitch. The novel was released on 10th January 2011 through Gollancz and was well received by critics, earning a Galaxy National Book Awards nomination for Aaronovitch in the New Writer of the Year...
by Ben Aaronovitch
Ben Aaronovitch
Ben Denis Aaronovitch is a London-born British writer who has worked on television series including Doctor Who, Casualty, Jupiter Moon and Dark Knight...
a number of these rivers are personified as river deities of varied importance.

The construction of the London Sewer System, which utilizes many of the lost rivers, was central to the 2006 Anne Perry
Anne Perry
Anne Perry is an English author of historical detective fiction. Perry was convicted of the murder of her friend's mother in 1954.-Early life:Born Juliet Marion Hulme in Blackheath, London, the daughter of Dr...
novel, Dark Assassin. This is a novel in Perry's series featuring detective William Monk
William Monk
Inspector William Monk is a fictional character created by the writer Anne Perry and hero of a series of books.He was born in Northumberland in the Victorian Era, the son of a fisherman....
.