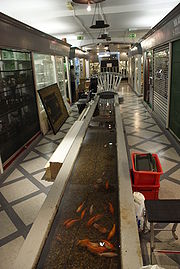 The Tyburn is a stream
Stream
A stream is a body of water with a current, confined within a bed and stream banks. Depending on its locale or certain characteristics, a stream may be referred to as a branch, brook, beck, burn, creek, "crick", gill , kill, lick, rill, river, syke, bayou, rivulet, streamage, wash, run or...
in London
London
London is the capital city of :England and the :United Kingdom, the largest metropolitan area in the United Kingdom, and the largest urban zone in the European Union by most measures. Located on the River Thames, London has been a major settlement for two millennia, its history going back to its...
, which runs underground from South Hampstead
Hampstead
Hampstead is an area of London, England, north-west of Charing Cross. Part of the London Borough of Camden in Inner London, it is known for its intellectual, liberal, artistic, musical and literary associations and for Hampstead Heath, a large, hilly expanse of parkland...
through St. James's Park
St. James's Park
St. James's Park is a 23 hectare park in the City of Westminster, central London - the oldest of the Royal Parks of London. The park lies at the southernmost tip of the St. James's area, which was named after a leper hospital dedicated to St. James the Less.- Geographical location :St. James's...
to meet the River Thames
River Thames
The River Thames flows through southern England. It is the longest river entirely in England and the second longest in the United Kingdom. While it is best known because its lower reaches flow through central London, the river flows alongside several other towns and cities, including Oxford,...
at Pimlico near Vauxhall Bridge. It is not to be confused with the Tyburn Brook
Tyburn Brook
Tyburn Brook is a tributary stream to the River Westbourne. Both watercourses are subterranean.Although similarly named, the Tyburn Brook does not connect with the River Tyburn.-See also:*Subterranean rivers of London...
which is a tributary of the River Westbourne
River Westbourne
The River Westbourne is a river in London, England. It flows from Hampstead down through Hyde Park to Sloane Square and into the River Thames at Chelsea...
.

Before it was covered over, the Tyburn arose from the confluence of two tributary streams from the hills of Hampstead. At what is now St. James's Park, it split into three branches, two of which formed Thorney Island
Thorney Island (London)
Thorney Island was the eyot on the Thames, upstream of mediæval London, where Westminster Abbey and the Palace of Westminster were built...
on which Westminster Abbey
Westminster Abbey
The Collegiate Church of St Peter at Westminster, popularly known as Westminster Abbey, is a large, mainly Gothic church, in the City of Westminster, London, United Kingdom, located just to the west of the Palace of Westminster. It is the traditional place of coronation and burial site for English,...
was built. The Tyburn is now completely enclosed and flows through underground conduits for its entire length, including one underneath Buckingham Palace
Buckingham Palace
Buckingham Palace, in London, is the principal residence and office of the British monarch. Located in the City of Westminster, the palace is a setting for state occasions and royal hospitality...
. Marylebone Lane (W1) follows the course of the Tyburn on what was its left bank through Marylebone
Marylebone
Marylebone is an affluent inner-city area of central London, located within the City of Westminster. It is sometimes written as St. Marylebone or Mary-le-bone....
village.

From its source at the Shepherd's Well near Fitzjohns Avenue in Hampstead
Hampstead
Hampstead is an area of London, England, north-west of Charing Cross. Part of the London Borough of Camden in Inner London, it is known for its intellectual, liberal, artistic, musical and literary associations and for Hampstead Heath, a large, hilly expanse of parkland...
it flowed south through Swiss Cottage
Swiss Cottage
Swiss Cottage is a district of the London Borough of Camden in London, England. Thedistrict is located north-west of Charing Cross. It is centred on the junction of Avenue Road and Finchley Road and is the location of Swiss Cottage tube station.-Etymology:...
down to Regent's Park. In the park, in contrast to the River Fleet
River Fleet
The River Fleet is the largest of London's subterranean rivers. Its two headwaters are two streams on Hampstead Heath; each is now dammed into a series of ponds made in the 18th century, the Hampstead Ponds and the Highgate Ponds. At the south edge of Hampstead Heath these two streams flow...
, another underground river, the Tyburn is carried in an aqueduct over the Regent's Canal
Regent's Canal
Regent's Canal is a canal across an area just north of central London, England. It provides a link from the Paddington arm of the Grand Union Canal, just north-west of Paddington Basin in the west, to the Limehouse Basin and the River Thames in east London....
.

The Tyburn gave its name to the village of Tyburn
Tyburn, London
Tyburn was a village in the county of Middlesex close to the current location of Marble Arch in present-day London. It took its name from the Tyburn or Teo Bourne 'boundary stream', a tributary of the River Thames which is now completely covered over between its source and its outfall into the...
, originally a manor
Manorialism
Manorialism, an essential element of feudal society, was the organizing principle of rural economy that originated in the villa system of the Late Roman Empire, was widely practiced in medieval western and parts of central Europe, and was slowly replaced by the advent of a money-based market...
of Marylebone
Marylebone
Marylebone is an affluent inner-city area of central London, located within the City of Westminster. It is sometimes written as St. Marylebone or Mary-le-bone....
, which was recorded in Domesday Book
Domesday Book
Domesday Book , now held at The National Archives, Kew, Richmond upon Thames in South West London, is the record of the great survey of much of England and parts of Wales completed in 1086...
and which stood approximately at the west end of what is now Oxford Street
Oxford Street
Oxford Street is a major thoroughfare in the City of Westminster in the West End of London, United Kingdom. It is Europe's busiest shopping street, as well as its most dense, and currently has approximately 300 shops. The street was formerly part of the London-Oxford road which began at Newgate,...
. It also gave its name to the predecessors of Oxford Street and Park Lane
Park Lane (road)
Park Lane is a major road in the City of Westminster, in Central London.-History:Originally a country lane running north-south along what is now the eastern boundary of Hyde Park, it became a fashionable residential address from the eighteenth century onwards, offering both views across Hyde Park...
, which were formerly called Tyburn Road and Tyburn Lane respectively.

An antique shop near the junction of Bond Street
Bond Street
Bond Street is a major shopping street in the West End of London that runs north-south through Mayfair between Oxford Street and Piccadilly. It has been a fashionable shopping street since the 18th century and is currently the home of many high price fashion shops...
and Oxford Street claims that a body of water which can be seen in an open conduit in the basement of its premises is part of the Tyburn. That the stream is clean or flows through the basement of the shop is unlikely since the stream is now connected into the London sewerage system
London sewerage system
The London sewerage system is part of the water infrastructure serving London. The modern system was developed during the late 19th century, and as London has grown the system has been expanded.-History:...
.