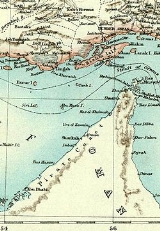 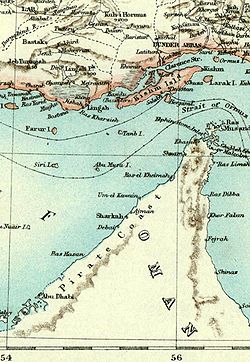 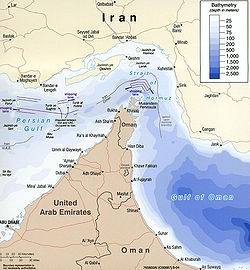 The strait
Strait
A strait or straits is a narrow, typically navigable channel of water that connects two larger, navigable bodies of water. It most commonly refers to a channel of water that lies between two land masses, but it may also refer to a navigable channel through a body of water that is otherwise not...
at its narrowest is 54 kilometres (33.6 mi) wide. It is the only sea passage to the open ocean for large areas of the petroleum
Petroleum
Petroleum or crude oil is a naturally occurring, flammable liquid consisting of a complex mixture of hydrocarbons of various molecular weights and other liquid organic compounds, that are found in geologic formations beneath the Earth's surface. Petroleum is recovered mostly through oil drilling...
-exporting Persian Gulf
Persian Gulf
The Persian Gulf, in Southwest Asia, is an extension of the Indian Ocean located between Iran and the Arabian Peninsula.The Persian Gulf was the focus of the 1980–1988 Iran-Iraq War, in which each side attacked the other's oil tankers...
. About 13 tankers carrying 15.5 Moilbbl of crude oil pass through the strait on an average day, making it one of the world's most strategically important choke point
Choke point
In military strategy, a choke point is a geographical feature on land such as a valley, defile or a bridge, or at sea such as a strait which an armed force is forced to pass, sometimes on a substantially narrower front, and therefore greatly decreasing its combat power, in order to reach its...
s. This represents 33% of the world's seaborne oil shipments, and 17% of all world oil shipments in 2009.

Ships moving through the Strait follow a Traffic Separation Scheme (TSS), which separates inbound from outbound traffic to reduce the risk of collision. The traffic lane is six miles (10 km) wide, including two two-mile (3 km)-wide traffic lanes, one inbound and one outbound, separated by a two-mile (3 km) wide separation median.

Ch.35. At the upper end of these Calaei islands is a range of mountains called Calon, and there follows not far beyond, the mouth of the Persian Gulf, where there is much diving for the pearl-mussel. To the left of the straits are great mountains called Asabon, and to the right there rises in full view another round and high mountain called Semiramis; between them the passage across the strait is about six hundred stadia; beyond which that very great and broad sea, the Persian Gulf, reaches far into the interior. At the upper end of this gulf there is a market-town designated by law called Apologus, situated near Charaex Spasini and the River Euphrates.

There are two opinions about the etymology of this name. In popular belief the derivation is from the name of the Persian God هرمزHormoz (a variant of Ahura Mazda
Ahura Mazda
Ahura Mazdā is the Avestan name for a divinity of the Old Iranian religion who was proclaimed the uncreated God by Zoroaster, the founder of Zoroastrianism...
). Compare the Pillars of Hercules
Pillars of Hercules
The Pillars of Hercules was the phrase that was applied in Antiquity to the promontories that flank the entrance to the Strait of Gibraltar. The northern Pillar is the Rock of Gibraltar in the British overseas territory of Gibraltar...
at the entrance to the Mediterranean. Scholars, historians and linguists derive the name "Ormuz" from the local Persian
Persian language
Persian is an Iranian language within the Indo-Iranian branch of the Indo-European languages. It is primarily spoken in Iran, Afghanistan, Tajikistan and countries which historically came under Persian influence...
word هورمغ Hur-mogh meaning date palm. In the local dialects of Hurmoz and Minab this strait is still called Hurmogh and has the aforementioned meaning.

On July 3, 1988, 290 people were killed when an Iran Air
Iran Air
Iran Air , formally Airline of the Islamic Republic of Iran is the flag carrier airline of Iran, operating services to 60 destinations, 35 international and 25 domestic. The cargo fleet operates services to 20 scheduled and 5 charter destinations...
Airbus A300
Airbus A300
The Airbus A300 is a short- to medium-range widebody jet airliner. Launched in 1972 as the world's first twin-engined widebody, it was the first product of Airbus Industrie, a consortium of European aerospace companies, wholly owned today by EADS...
passenger jet was shot down over the strait by the United States Navy
United States Navy
The United States Navy is the naval warfare service branch of the United States Armed Forces and one of the seven uniformed services of the United States. The U.S. Navy is the largest in the world; its battle fleet tonnage is greater than that of the next 13 largest navies combined. The U.S...
guided missile
Guided Missile
Guided Missile is a London based independent record label set up by Paul Kearney in 1994.Guided Missile has always focused on 'the underground', preferring to put out a steady flow of releases and developing the numerous GM events around London and beyond....
cruiser
Cruiser
A cruiser is a type of warship. The term has been in use for several hundreds of years, and has had different meanings throughout this period...
USS Vincennes
USS Vincennes (CG-49)
The fourth USS Vincennes is a U.S. Navy Ticonderoga class Aegis guided missile cruiser. On July 3, 1988, the ship shot down Iran Air Flight 655 over the Persian Gulf, killing all 290 civilian passengers on board, including 38 non-Iranians and 66 children.The ship was launched 14 April 1984 and...
. There is still a lingering controversy
Iran Air Flight 655
Iran Air Flight 655 was a civilian jet airliner shot down by U.S. missiles on 3 July 1988, over the Strait of Hormuz, toward the end of the Iran–Iraq War...
about the event, a tragedy in aviation
Aviation
Aviation is the design, development, production, operation, and use of aircraft, especially heavier-than-air aircraft. Aviation is derived from avis, the Latin word for bird.-History:...
history.

A series of naval stand-offs between Iranian speedboats and U.S. warships in the Strait of Hormuz occurred in December 2007 and January 2008. U.S. officials accused Iran of harassing and provoking their naval vessels; Iranian officials denied these allegations. On January 14, 2008, U.S. naval officials appeared to contradict the Pentagon version of the Jan. 16 event, in which U.S. officials said U.S. vessels were near to firing on approaching Iranian boats. The Navy's regional commander, Vice Admiral Kevin Cosgriff, said the Iranians had "neither anti-ship missiles nor torpedoes" and that he "wouldn't characterize the posture of the US 5th Fleet as afraid of these small boats".

On June 29, 2008, the commander of Iran's Revolutionary Guard, Ali Mohammed Jafari, said that if Iran were attacked by Israel or the United States, it would seal off the Strait of Hormuz, to wreak havoc in oil markets. This statement followed other more ambiguous threats from Iran's oil minister and other government officials that a Western attack on Iran would result in turmoil in oil supply.

In response, Vice Admiral Kevin Cosgriff, commander of the U.S. 5th Fleet stationed in Bahrain across the Persian Gulf from Iran, warned that such an action by Iran would be considered an act of war, and that the U.S. would not allow Iran to effectively hold hostage nearly a third of the world's oil supply.

On July 8, 2008, Ali Shirazi, a mid-level clerical aide to Iran's Supreme Leader Ayatollah Ali Khamenei, was quoted by the student news agency ISNA
ISNA
ISNA can refer to:Abbreviations/acronyms* Iranian Students' News Agency* Intersex Society of North America* Islamic Society of North America* Indigenous Sovereign Nation Assembly, an assembly of indigenous nations in New Zealand and vicinityPlaces...
as saying to Revolutionary Guards, "The Zionist regime is pressuring White House officials to attack Iran. If they commit such a stupidity, Tel Aviv and U.S. shipping in the Persian Gulf will be Iran's first targets and they will be burned."

An article in International Security contended that Iran could seal off or impede traffic in the Strait for a month, and an attempt by the U.S. to reopen it would likely escalate the conflict. In a later issue, however, the journal published a response which questioned some key assumptions and suggested a much shorter timeline for re-opening.

In the last week of July 2008, in the Operation Brimstone, dozens of U.S. and foreign navy ships came to off the eastern coast in the U.S., to undergo joint exercises for possible military activity in the shallow waters off the coast of Iran.

As of August 11, 2008, more than 40 U.S. and allied ships reportedly were en route to the Straits of Hormuz. One U.S. carrier battle group from Japan would complement two more, which are already in the Persian Gulf, for a total of five battle groups, not counting submarines.