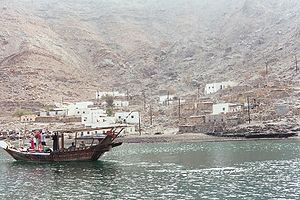 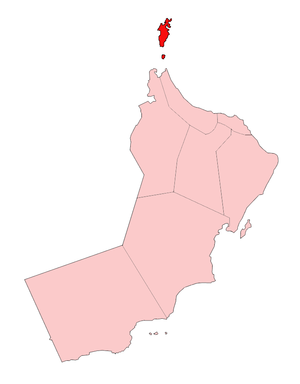 Musandam Governorate is a governorate of Oman
Administrative divisions of Oman
||Oman is divided into five regions and four governorates . The fourth governorate, Al Buraymi, was created in October 2006 from parts of Ad Dhahirah region. The regions are further subdivided into 61 districts . Each region has one or more regional center with a grand total of twelve.-External...
.

Geographically, the Musandam peninsula juts into the Strait of Hormuz
Strait of Hormuz
The Strait of Hormuz is a narrow, strategically important waterway between the Gulf of Oman in the southeast and the Persian Gulf. On the north coast is Iran and on the south coast is the United Arab Emirates and Musandam, an exclave of Oman....
, the narrow entry into the Persian Gulf, from the Arabian Peninsula
Arabian Peninsula
The Arabian Peninsula is a land mass situated north-east of Africa. Also known as Arabia or the Arabian subcontinent, it is the world's largest peninsula and covers 3,237,500 km2...
. The Musandam peninsula
Peninsula
A peninsula is a piece of land that is bordered by water on three sides but connected to mainland. In many Germanic and Celtic languages and also in Baltic, Slavic and Hungarian, peninsulas are called "half-islands"....
is an exclave of Oman
Oman
Oman , officially called the Sultanate of Oman , is an Arab state in southwest Asia on the southeast coast of the Arabian Peninsula. It is bordered by the United Arab Emirates to the northwest, Saudi Arabia to the west, and Yemen to the southwest. The coast is formed by the Arabian Sea on the...
, separated from the rest of the country by the United Arab Emirates
United Arab Emirates
The United Arab Emirates, abbreviated as the UAE, or shortened to "the Emirates", is a state situated in the southeast of the Arabian Peninsula in Western Asia on the Persian Gulf, bordering Oman, and Saudi Arabia, and sharing sea borders with Iraq, Kuwait, Bahrain, Qatar, and Iran.The UAE is a...
. Its location gives Oman partial control, shared with Iran
Iran
Iran , officially the Islamic Republic of Iran , is a country in Southern and Western Asia. The name "Iran" has been in use natively since the Sassanian era and came into use internationally in 1935, before which the country was known to the Western world as Persia...
, of the strategic strait. In the northern section of Musandam, around Kumzar
Kumzar
Kumzar , also written as Kumza, is a village located in Musandam, the northernmost province of Oman. It is the most northerly inhabited part of the country, located on the Strait of Hormuz. The village is isolated and only accessible by boat....
, the language is Kumzari, which is one of the south-western Iranian languages
Iranian languages
The Iranian languages form a subfamily of the Indo-Iranian languages which in turn is a subgroup of Indo-European language family. They have been and are spoken by Iranian peoples....
and a sub-branch of Persian
Persian language
Persian is an Iranian language within the Indo-Iranian branch of the Indo-European languages. It is primarily spoken in Iran, Afghanistan, Tajikistan and countries which historically came under Persian influence...
. The Musandam Peninsula has an area of 1800 square kilometres (695 sq mi) and a population of 31,425 people.
Connectivity has traditionally been a problem for the region, but this has greatly improved since August 2008 with the world's fastest passenger ferry launching service between Muscat
Muscat, Oman
Muscat is the capital of Oman. It is also the seat of government and largest city in the Governorate of Muscat. As of 2008, the population of the Muscat metropolitan area was 1,090,797. The metropolitan area spans approximately and includes six provinces called wilayats...
and Musandam.

Musandam Governorate consists of four districts (wilayat):
Khasab town is the regional center of the Governorate.

The rugged coastline resembles the glacier
Glacier
A glacier is a large persistent body of ice that forms where the accumulation of snow exceeds its ablation over many years, often centuries. At least 0.1 km² in area and 50 m thick, but often much larger, a glacier slowly deforms and flows due to stresses induced by its weight...
-carved coasts of polar regions, but in this case, the coast was shaped by the movement of Earth’s crust. The Arabian plate
Arabian Plate
The Arabian Plate is one of three tectonic plates which have been moving northward over millions of years and colliding with the Eurasian Plate...
is slowly pushing under the Eurasian plate
Eurasian Plate
The Eurasian Plate is a tectonic plate which includes most of the continent of Eurasia , with the notable exceptions of the Indian subcontinent, the Arabian subcontinent, and the area east of the Chersky Range in East Siberia...
, creating the earthquake-prone mountains of Iran. On the leading edge of the Arabian plate, the Musandam Peninsula is sinking. The higher elevation mountains remain above the water, but the sea has rushed in to fill the valleys with fingers of water.