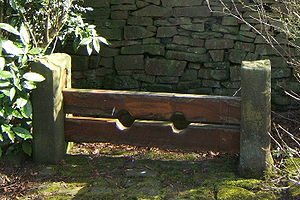 Stocks are devices used in the medieval and colonial American times as a form of physical punishment
Physical punishment
Physical punishment is any form of penalty in a judicial, educational or domestic setting that takes a physical form, by the infliction on the offender of pain, injury, discomfort or humiliation...
involving public humiliation
Public humiliation
Public humiliation was often used by local communities to punish minor and petty criminals before the age of large, modern prisons .- Shameful exposure :...
. The stocks partially immobilized its victims and they were often exposed in a public place such as the site of a market to the scorn of those who passed by. Since the purpose of putting offenders in the stocks was to expose them to ridicule and mockery, passers-by were encouraged to throw at those being punished mud, rotten eggs, moldy fruit and vegetables, smelly fish, offal, and excrement (both animal and human). Consequently, many of those who sat in the stocks were very dirty and smelly by the time that they were let out.

The stocks are similar to the pillory
Pillory
The pillory was a device made of a wooden or metal framework erected on a post, with holes for securing the head and hands, formerly used for punishment by public humiliation and often further physical abuse, sometimes lethal...
and the pranger
Pranger
The pranger is a German physical punishment device related to the stocks and the pillory. The Middle Low German word means something that pinches badly.The pranger chained the victim's neck to a pair of leg restraints fastened around the ankles...
, as each consists of large, hinged, wooden boards; the difference, however, is that when a person is placed in the stocks, their feet are locked in place, and sometimes as well their hands or head, or these may be chained.

Since stocks served an outdoor public form of punishment its victims were subjected to the daily and nightly weather. As a consequence it was not uncommon for people kept in stocks over several days to die from heat exhaustion or hypothermia
Hypothermia
Hypothermia is a condition in which core temperature drops below the required temperature for normal metabolism and body functions which is defined as . Body temperature is usually maintained near a constant level of through biologic homeostasis or thermoregulation...
.

The practice of using stocks continues to be cited as an example of torture
Torture
Torture is the act of inflicting severe pain as a means of punishment, revenge, forcing information or a confession, or simply as an act of cruelty. Throughout history, torture has often been used as a method of political re-education, interrogation, punishment, and coercion...
, cruel and unusual punishment
Cruel and unusual punishment
Cruel and unusual punishment is a phrase describing criminal punishment which is considered unacceptable due to the suffering or humiliation it inflicts on the condemned person...
. Insult
Insult
An insult is an expression, statement which is considered degrading and offensive. Insults may be intentional or accidental...
ing, kick
Kick
In combat sports and hand-to-hand combat, a kick is a physical strike using the foot, leg, or knee . This type of attack is used frequently, especially in stand-up fighting...
ing, spitting
Spitting
Spitting or expectoration is the act of forcibly ejecting saliva or other substances from the mouth. It is currently considered rude and a social taboo in many parts of the world including the West, while in some other parts of the world it is considered more acceptable...
and in some cases urinating and defecating on its victims could be applied at the free will of any of those present. 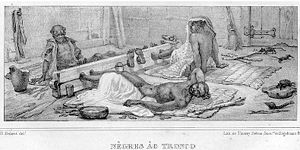 The stocks were popular among civil authorities from medieval to early modern times, and have also been used as punishment for military deserters
Desertion
In military terminology, desertion is the abandonment of a "duty" or post without permission and is done with the intention of not returning...
or for dereliction of military duty. In the stocks, an offender's hands and head, or sometimes their ankles, would be placed and locked through two or three holes in the center of a board. Either before or after this the wrongdoer might have their footwear removed, exposing their bare feet
Foot
The foot is an anatomical structure found in many vertebrates. It is the terminal portion of a limb which bears weight and allows locomotion. In many animals with feet, the foot is a separate organ at the terminal part of the leg made up of one or more segments or bones, generally including claws...
. Exhibiting an offender's bare feet was considered a form of humiliation
Humiliation
Humiliation is the abasement of pride, which creates mortification or leads to a state of being humbled or reduced to lowliness or submission. It can be brought about through bullying, intimidation, physical or mental mistreatment or trickery, or by embarrassment if a person is revealed to have...
. Offenders were forced to carry out their punishments in the rain, during the heat of summer, or in freezing weather, and generally would receive only bread and water, plus anything brought by their friends. Finger pillories often went by the name of "finger stocks".

Public stocks were typically positioned in the most public place available, as public humiliation was a critical aspect of such punishment. Typically, a person condemned to the stocks was subjected to a variety of abuses, ranging from having refuse thrown at them, to paddling, tickling
Tickle torture
Tickle torture is the use of tickling to abuse, dominate, humiliate or even "prank" someone. The victim laughs even if he or she finds the experience unpleasant because the laughter is an innate reflex rather than social conditioning...
(the most common) or whipping of the unprotected feet (bastinado).

The stocks were used in Elizabethan England, and by the Puritan
Puritan
The Puritans were a significant grouping of English Protestants in the 16th and 17th centuries. Puritanism in this sense was founded by some Marian exiles from the clergy shortly after the accession of Elizabeth I of England in 1558, as an activist movement within the Church of England...
s in the colonial period of American history. Their last recorded use in the United Kingdom was in 1872 at Adpar
Adpar
Adpar, formerly Trefhedyn, is a village in Ceredigion, Wales now considered as a part of Newcastle Emlyn to which it is joined by a fine bridge across the River Teifi. Adpar used to be an ancient Welsh borough in its own right.-History:...
, Newcastle Emlyn
Newcastle Emlyn
Newcastle Emlyn is a town straddling the counties of Ceredigion and Carmarthenshire in west Wales and lying on the River Teifi.Adpar is the part of the town that lies on the Ceredigion side of the River Teifi...
, west Wales
Wales
Wales is a country that is part of the United Kingdom and the island of Great Britain, bordered by England to its east and the Atlantic Ocean and Irish Sea to its west. It has a population of three million, and a total area of 20,779 km²...
.

The Spanish conquistadores introduced stocks as a popular form of punishment and humiliation against those that impeded the consolidation of their settlements in the new world. They were still used in the 19th century in Latin America
Latin America
Latin America is a region of the Americas where Romance languages  – particularly Spanish and Portuguese, and variably French – are primarily spoken. Latin America has an area of approximately 21,069,500 km² , almost 3.9% of the Earth's surface or 14.1% of its land surface area...
to punish indigenous miners in many countries for rebelling against their bosses.

An excellent example of stocks can be seen in Dromore, County Down
Dromore, County Down
Dromore is a small market town in the Banbridge District of County Down, Northern Ireland. It is south-west of Belfast, on the A1 Belfast – Dublin road. The 2001 Census recorded a population of 4,968 people....
, in Northern Ireland
Northern Ireland
Northern Ireland is one of the four countries of the United Kingdom. Situated in the north-east of the island of Ireland, it shares a border with the Republic of Ireland to the south and west...
. They are occasionally preserved in churches though as wooden devices they are naturally subject to the perils of rotting and decay.