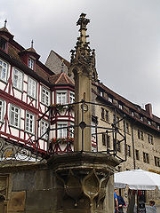 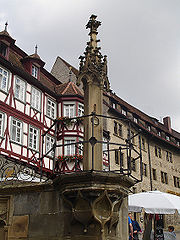 The pillory was a device made of a wooden or metal framework erected on a post, with holes for securing the head and hands, formerly used for punishment
Punishment
Punishment is the authoritative imposition of something negative or unpleasant on a person or animal in response to behavior deemed wrong by an individual or group....
by public humiliation
Public humiliation
Public humiliation was often used by local communities to punish minor and petty criminals before the age of large, modern prisons .- Shameful exposure :...
and often further physical abuse, sometimes lethal. The pillory is related to the stocks
Stocks
Stocks are devices used in the medieval and colonial American times as a form of physical punishment involving public humiliation. The stocks partially immobilized its victims and they were often exposed in a public place such as the site of a market to the scorn of those who passed by...
.

The word is documented in English since 1274 (attested in Anglo-Latin from c. 1189), and stems from Old French pellori (1168; modern French pilori, see below), itself from medieval Latin pilloria, of uncertain origin, perhaps a diminutive of Latin pila "pillar, stone barrier."

Rather like the lesser punishment called the stocks
Stocks
Stocks are devices used in the medieval and colonial American times as a form of physical punishment involving public humiliation. The stocks partially immobilized its victims and they were often exposed in a public place such as the site of a market to the scorn of those who passed by...
, the pillory consisted of hinged wooden boards forming holes through which the head and/or various limbs were inserted; then the boards were locked together to secure the captive. Pillories were set up to hold petty criminals in marketplaces, crossroads, and other public places. They were often placed on platforms to increase public visibility of the offender. (See the photo to the right.) Often a placard detailing the crime was placed nearby; these punishments generally lasted only a few hours.

In being forced to bend forward and stick their head and hands out in front of them, offenders in the pillory would have been extremely uncomfortable during their punishment. However, the main purpose in putting criminals in the pillory was to publicly humiliate them. On discovering that the pillory was occupied, people would excitedly gather in the marketplace to taunt, tease and laugh at the offender on display.

Those who gathered to watch the punishment typically wanted to make the offender's experience as unpleasant as possible. In addition to being jeered and mocked, those in the pillory might be pelted with mouldy fruit and vegetables, rotten eggs, bad fish, mud, offal, and animal excrement. As a result, criminals were often very dirty by the end of their punishment, their faces and hair begrimed with the smelly refuse with which they had been pelted.

The criminal could also be sentenced to further punishments while in the pillory: humiliation by shaving off some or all hair or regular corporal punishment
Corporal punishment
Corporal punishment is a form of physical punishment that involves the deliberate infliction of pain as retribution for an offence, or for the purpose of disciplining or reforming a wrongdoer, or to deter attitudes or behaviour deemed unacceptable...
(s), notably flagellation
Flagellation
Flagellation or flogging is the act of methodically beating or whipping the human body. Specialised implements for it include rods, switches, the cat o' nine tails and the sjambok...
(the pillory serving as the "whipping post") or even permanent mutilation such as branding
Human branding
Human branding or stigmatizing is the process in which a mark, usually a symbol or ornamental pattern, is burned into the skin of a living person, with the intention that the resulting scar makes it permanent. This is performed using a hot or very cold branding iron...
or having an ear cut off, as in the case of John Bastwick
John Bastwick
John Bastwick was an English Puritan physician and controversial writer.-Life:He was born at Writtle, Essex. He entered Emmanuel College, Cambridge, on 19 May 1614, but remained there only a very short time, and left the university without a degree. He travelled and served for a time as a soldier,...
. 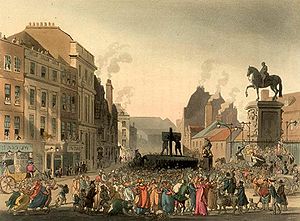 After 1816, use of the pillory was restricted in England to punishment for perjury
Perjury
Perjury, also known as forswearing, is the willful act of swearing a false oath or affirmation to tell the truth, whether spoken or in writing, concerning matters material to a judicial proceeding. That is, the witness falsely promises to tell the truth about matters which affect the outcome of the...
or subornation. The pillory was formally abolished as a form of punishment in England and Wales in 1837, but the stocks remained in use, though extremely infrequently, until 1872. The last person to be pilloried in England was Peter James Bossy, who was convicted of "wilful and corrupt perjury" in 1830. He was offered the choice of seven years penal transportation
Penal transportation
Transportation or penal transportation is the deporting of convicted criminals to a penal colony. Examples include transportation by France to Devil's Island and by the UK to its colonies in the Americas, from the 1610s through the American Revolution in the 1770s, and then to Australia between...
or one hour in the pillory, and chose the latter.

In France, time in the "pilori" was usually limited to two hours. It was replaced in 1789 by "exposition", and abolished in 1832. Two types of device were used:

Like other permanent apparatus for physical punishment, the pillory was often placed prominently and constructed more elaborately than necessary. It served as a symbol of the power of the judicial authorities, and its continual presence was seen as a deterrent, like permanent gallows
Gallows
A gallows is a frame, typically wooden, used for execution by hanging, or by means to torture before execution, as was used when being hanged, drawn and quartered...
for authorities endowed with high justice
High Justice
High Justice is a 1974 collection of science fiction short stories by Jerry Pournelle. It was republished in a omnibus edition with Exiles to Glory in 2009 as Exile -- and Glory....
.

In Portugal several pelourinhos, typically on the main square and/or in front of a major church or palace, are now counted among the major local monuments, several clearly bearing the emblems of a king or queen. The same is true of its former colonies, notably in Brazil (in its former capital, Salvador
Salvador, Bahia
Salvador is the largest city on the northeast coast of Brazil and the capital of the Northeastern Brazilian state of Bahia. Salvador is also known as Brazil's capital of happiness due to its easygoing population and countless popular outdoor parties, including its street carnival. The first...
, the whole old quarter is known as Pelourinho
Historic Centre (Salvador, Bahia)
The Historic Centre is a historic neighborhood located in the western zone of Salvador, Bahia...
) and Africa (e.g. Cape Verde's old capital, Cidade Velha
Cidade Velha
Cidade Velha , or simplyCidadi in Cape Verdean Creole, is a city located 15 km from Praia on the island of Santiago. It is the oldest settlement in Cape Verde and used to serve as the capital of Cape Verde...
), always as symbols of royal power.

In Spain it was called picota.

The pillory was also in common use in other western countries and colonies, and similar devices were used in other, non-Western cultures. According to one source, the pillory was abolished as a form of punishment in the United States in 1839, but this cannot be entirely true because it was clearly in use in Delaware
Delaware
Delaware is a U.S. state located on the Atlantic Coast in the Mid-Atlantic region of the United States. It is bordered to the south and west by Maryland, and to the north by Pennsylvania...
as recently as 1901. 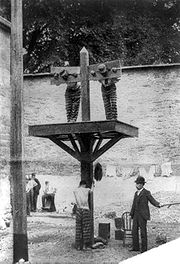 There was a variant (rather of the stocks
Stocks
Stocks are devices used in the medieval and colonial American times as a form of physical punishment involving public humiliation. The stocks partially immobilized its victims and they were often exposed in a public place such as the site of a market to the scorn of those who passed by...
type), called a barrel pillory, or Spanish mantle, used to punish drunks, which is reported in England and among its troops. It fitted over the entire body, with the head sticking out from a hole in the top. The criminal is put in either an enclosed barrel, forcing him to kneel in his own filth, or an open barrel, also known as "barrel shirt" or "drunkards collar" after the punishable crime, leaving him to roam about town or military camp and be ridiculed and scorned. (The expression over a barrel refers to a timber barrel being used as an alternative to the whipping post, but which the victim has to bend over, as with a punishment horse, so physical pain is more prominent than public humiliation). 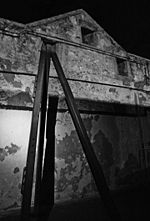 Although a pillory, by its physical nature, was a perfect choice to double as a whipping post to tie a criminal down for public flagellation
Flagellation
Flagellation or flogging is the act of methodically beating or whipping the human body. Specialised implements for it include rods, switches, the cat o' nine tails and the sjambok...
(as used to be the case in many German sentences to staupenschlag), the two as such are separate punishments: the pillory is a sentence to public humiliation
Public humiliation
Public humiliation was often used by local communities to punish minor and petty criminals before the age of large, modern prisons .- Shameful exposure :...
, whipping an essentially painful corporal punishment
Corporal punishment
Corporal punishment is a form of physical punishment that involves the deliberate infliction of pain as retribution for an offence, or for the purpose of disciplining or reforming a wrongdoer, or to deter attitudes or behaviour deemed unacceptable...
that could be administered anywhere, (semi-)publicly or not, often in prison; if a pole or more elaborate construction is erected, temporary or permanent, often on a scaffolding, for lashings, as in a few southern US prisons until the 1960s, the correct term is whipping post—however, sometimes a construction combines the two: display at the upper storey above a pole used to tie the victims to, as illustrated in the picture (right) of the installation at New Castle County Jail, Delaware.

When permanently present in sight of prisoners, it was thought to act as a deterrent for bad behaviour, especially when each prisoner had been subjected to a "welcome beating" on arrival, as in 18th-century Waldheim in Saxony (12, 18 or 24 whip lashes on the bare posterior tied to a pole in the castle courtyard, or by birch rod over the "bock", a bench in the corner).
Still a different penal use of such constructions is to tie the criminal down, possibly after a beating, to expose him for a long time to the elements, usually without food and drink, even to the point of starvation.

While the pillory has left common use, the image remains preserved in the figurative use, which has become the dominant one, of the verb "to pillory" (attested in English since 1600), meaning "to expose to public ridicule, scorn and abuse", or more generally to humiliate before witnesses.

Corresponding expressions exist in other languages, e.g., clouer au pilori "to nail to the pillory" in French, or "mettere alla gogna" in Italian, which in Dutch is aan de schandpaal nagelen, placing even greater emphasis on the predominantly humiliating character as the Dutch word for pillory, schandpaal, literally meaning "pole of shame".