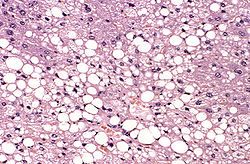 In cellular
Cell (biology)
The cell is the basic structural and functional unit of all known living organisms. It is the smallest unit of life that is classified as a living thing, and is often called the building block of life. The Alberts text discusses how the "cellular building blocks" move to shape developing embryos....
pathology
Pathology
Pathology is the precise study and diagnosis of disease. The word pathology is from Ancient Greek , pathos, "feeling, suffering"; and , -logia, "the study of". Pathologization, to pathologize, refers to the process of defining a condition or behavior as pathological, e.g. pathological gambling....
, steatosis (also called fatty change, fatty degeneration or adipose degeneration) is the process describing the abnormal retention of lipid
Lipid
Lipids constitute a broad group of naturally occurring molecules that include fats, waxes, sterols, fat-soluble vitamins , monoglycerides, diglycerides, triglycerides, phospholipids, and others...
s within a cell. It reflects an impairment of the normal processes of synthesis
Biosynthesis
Biosynthesis is an enzyme-catalyzed process in cells of living organisms by which substrates are converted to more complex products. The biosynthesis process often consists of several enzymatic steps in which the product of one step is used as substrate in the following step...
and elimination of triglyceride
Triglyceride
A triglyceride is an ester derived from glycerol and three fatty acids. There are many triglycerides, depending on the oil source, some are highly unsaturated, some less so....
fat. Excess lipid accumulates in vesicle
Vesicle (biology)
A vesicle is a bubble of liquid within another liquid, a supramolecular assembly made up of many different molecules. More technically, a vesicle is a small membrane-enclosed sack that can store or transport substances. Vesicles can form naturally because of the properties of lipid membranes , or...
s that displace the cytoplasm
Cytoplasm
The cytoplasm is a small gel-like substance residing between the cell membrane holding all the cell's internal sub-structures , except for the nucleus. All the contents of the cells of prokaryote organisms are contained within the cytoplasm...
. When the vesicles are large enough to distort the nucleus
Cell nucleus
In cell biology, the nucleus is a membrane-enclosed organelle found in eukaryotic cells. It contains most of the cell's genetic material, organized as multiple long linear DNA molecules in complex with a large variety of proteins, such as histones, to form chromosomes. The genes within these...
, the condition is known as macrovesicular steatosis, otherwise the condition is known as microvesicular steatosis. Whilst not particularly detrimental to the cell in mild cases, large accumulations can disrupt cell constituents, and in severe cases the cell may even burst.

The risk factors associated with steatosis are varied, and include diabetes mellitus
Diabetes mellitus
Diabetes mellitus, often simply referred to as diabetes, is a group of metabolic diseases in which a person has high blood sugar, either because the body does not produce enough insulin, or because cells do not respond to the insulin that is produced...
, protein malnutrition, hypertension cell toxins, obesity, and anoxia
Hypoxia (medical)
Hypoxia, or hypoxiation, is a pathological condition in which the body as a whole or a region of the body is deprived of adequate oxygen supply. Variations in arterial oxygen concentrations can be part of the normal physiology, for example, during strenuous physical exercise...
. As the liver is the primary organ of lipid metabolism
Lipid metabolism
Lipid metabolism refers to the processes that involve the intercourse and degradation of lipids.The types of lipids involved include:* Bile salts* Cholesterols* Eicosanoids* Glycolipids* Ketone bodies* Fatty acids - see also fatty acid metabolism...
it is most often associated with steatosis, however it may occur in any organ, commonly the kidneys, heart, and muscle.

No single mechanism leading to steatosis exists, rather a varied multitude of pathologies disrupt normal lipid movement through the cell and cause accumulation. These mechanisms can be separated on whether they ultimately cause an oversupply of lipid which can not be removed quickly enough (too much in), or whether they cause a failure in lipid breakdown (not enough used).

Microvesicular fatty degeneration is characterized by small intracytoplasmic fat vacuoles (Liposomes) which accumulate in the cell. Common causes are Tetracyclines, Acute fatty liver of Pregnancy, Reye’s Syndrome, and Hepatitis D
Hepatitis D
Hepatitis D, also referred to as hepatitis D virus and classified as Hepatitis delta virus, is a disease caused by a small circular enveloped RNA virus. It is one of five known hepatitis viruses: A, B, C, D, and E. HDV is considered to be a subviral satellite because it can propagate only in the...
.

Failure of lipid metabolism can also lead to the mechanisms which would normally utilise or remove lipids becoming impaired, resulting in the accumulation of unused lipids in the cell. Certain toxins, such as alcohols, carbon tetrachloride
Carbon tetrachloride
Carbon tetrachloride, also known by many other names is the organic compound with the formula CCl4. It was formerly widely used in fire extinguishers, as a precursor to refrigerants, and as a cleaning agent...
, aspirin
Aspirin
Aspirin , also known as acetylsalicylic acid , is a salicylate drug, often used as an analgesic to relieve minor aches and pains, as an antipyretic to reduce fever, and as an anti-inflammatory medication. It was discovered by Arthur Eichengrun, a chemist with the German company Bayer...
, and diphtheria toxin
Diphtheria toxin
Diphtheria toxin is an exotoxin secreted by Corynebacterium diphtheriae, the pathogen bacterium that causes diphtheria. Unusually, the toxin gene is encoded by a bacteriophage...
, interfere with cellular machinery involved in lipid metabolism. In those with Gaucher's disease
Gaucher's disease
Gaucher's disease is a genetic disease in which a fatty substance accumulates in cells and certain organs.Gaucher's disease is the most common of the lysosomal storage diseases. It is caused by a hereditary deficiency of the enzyme glucosylceramidase. The enzyme acts on the fatty acid...
, the lysosome
Lysosome
thumb|350px|Schematic of typical animal cell, showing subcellular components. [[Organelle]]s: [[nucleoli]] [[cell nucleus|nucleus]] [[ribosomes]] [[vesicle |vesicle]] rough [[endoplasmic reticulum]]...
s fail to degrade lipids and steatosis arises from the accumulation of glycolipid
Glycolipid
Glycolipids are lipids with a carbohydrate attached. Their role is to provide energy and also serve as markers for cellular recognition.-Metabolism:...
s. Protein malnutrition, such as that seen in kwashiorkor
Kwashiorkor
Kwashiorkor is an acute form of childhood protein-energy malnutrition characterized by edema, irritability, anorexia, ulcerating dermatoses, and an enlarged liver with fatty infiltrates. The presence of edema caused by poor nutrition defines kwashiorkor...
, results in a lack of precursor apoproteins within the cell, therefore unused lipids which would normally participate in lipoprotein
Lipoprotein
A lipoprotein is a biochemical assembly that contains both proteins and lipids water-bound to the proteins. Many enzymes, transporters, structural proteins, antigens, adhesins, and toxins are lipoproteins...
synthesis begin to accumulate.

Histologically
Histology
Histology is the study of the microscopic anatomy of cells and tissues of plants and animals. It is performed by examining cells and tissues commonly by sectioning and staining; followed by examination under a light microscope or electron microscope...
, steatosis is physically apparent as lipid within membrane bound liposome
Liposome
Liposomes are artificially prepared vesicles made of lipid bilayer. Liposomes can be filled with drugs, and used to deliver drugs for cancer and other diseases. Liposomes are composite structures made of phospholipids and may contain small amounts of other molecules...
s of parenchyma
Parenchyma
Parenchyma is a term used to describe a bulk of a substance. It is used in different ways in animals and in plants.The term is New Latin, f. Greek παρέγχυμα - parenkhuma, "visceral flesh", f. παρεγχεῖν - parenkhein, "to pour in" f. para-, "beside" + en-, "in" + khein, "to pour"...
l cells. When this tissue is fixed and stained to be better viewed under a microscope, the lipid is usually dissolved by the solvents used to prepare the sample. As such, samples prepared this way will appear to have empty holes within the cells where the lipid has been cleared. Special lipid stains, such as Sudan stain
Sudan stain
Sudan staining is the use of Sudan dyes to stain sudanophilic substances, usually lipids. Sudan lysochromes are used....
s and osmium tetroxide are able to retain and show up lipid droplets, hence more conclusively indicating the presence of lipids. Other intracellular accumulations, such as water or glycogen
Glycogen
Glycogen is a molecule that serves as the secondary long-term energy storage in animal and fungal cells, with the primary energy stores being held in adipose tissue...
, can also appear as clear vacuoles, therefore it becomes necessary to use stains to better decide what is accumulating.

Grossly, steatosis causes organ enlargement and lightening in colour. This is due to the high lipid content increasing the organ's volume and becoming visible to the unaided eye. In severe cases, the organ may become vastly enlarged, greasy, and yellow in appearance.

On X-ray computed tomography (CT), the increased fat component will decrease the density of the liver tissue, making the image less bright. Typically the density of the spleen and liver are roughly equivalent. In steatosis, there is a difference between the density and brightness of the two organs, with the liver appearing darker.
On ultrasound, fat is more echogenic
Echogenicity
Echogenicity is the ability to bounce an echo, e.g. return the signal in ultrasound examinations. In other words, Echogenicity is higher when the surface bouncing the sound echo reflects increased sound waves. It could be increased by intravenously administering gas-filled microbubble contrast...
(capable of reflecting sound waves). The combination of liver steatosis being dark on CT and bright on ultrasound is sometimes known as the flip flop sign.