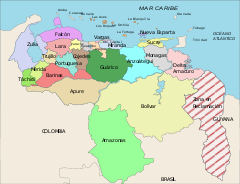 Venezuela
Venezuela
Venezuela , officially called the Bolivarian Republic of Venezuela , is a tropical country on the northern coast of South America. It borders Colombia to the west, Guyana to the east, and Brazil to the south...
is divided into 23 states (estados), 1 Capital District
Venezuelan Capital District
The Capital District of Venezuela is a federal district corresponding to the capital Caracas. It has an area of 433 km² and there is only one administrative division , Libertador, which contains about half City of Caracas. It is the seat of the federal government and the head of the public...
(Distrito Capital) and the Federal Dependencies (Dependencias Federales) that consist of a large number of Venezuelan islands. Venezuela also claims the Guayana Esequiba
Guayana Esequiba
Guayana Esequiba is a territory administered by Guyana but claimed by Venezuela. It includes the territory between the Cuyuni River to the west and the Essequibo River to the east...
territory which comprises six districts in the independent nation of Guyana
Guyana
Guyana , officially the Co-operative Republic of Guyana, previously the colony of British Guiana, is a sovereign state on the northern coast of South America that is culturally part of the Anglophone Caribbean. Guyana was a former colony of the Dutch and of the British...
.

Prior to the Federal War
Federal War
The Federal War - also known as the Great War or the Five Year War - was a civil war in Venezuela between the conservative party and the liberal party about the monopoly of the conservatives of the land and the government positions, and their reluctance to grant any reforms. This drove the...
(1859–1863), Venezuela was divided into provinces rather than states (see Provinces of Venezuela
Provinces of Venezuela
The Provinces of Venezuela were administrative divisions used from Venezuela's independence from Gran Colombia in 1830 to 1864, when the States of Venezuela were created. There were initially 11 provinces, with 3 created later, until in 1856 the Law of Territorial Division divided Venezuela into 21...
). The victorious forces were supposed to grant more autonomy to the individual states, but this was not implemented.

Below is a list of the 23 states of Venezuela. The states are listed along with their correspondent emblems, data and location.