Encyclopedia
Puerto Ayacucho (ˈpweɾto aʝaˈkutʃo) is the capital and largest city of Amazonas State in Venezuela
Venezuela
Venezuela , officially called the Bolivarian Republic of Venezuela , is a tropical country on the northern coast of South America. It borders Colombia to the west, Guyana to the east, and Brazil to the south...
. Puerto Ayacucho is located across the Orinoco River from the Colombia
Colombia
Colombia, officially the Republic of Colombia , is a unitary constitutional republic comprising thirty-two departments. The country is located in northwestern South America, bordered to the east by Venezuela and Brazil; to the south by Ecuador and Peru; to the north by the Caribbean Sea; to the...
n village of Casuarito.

The city was founded to facilitate the transport of goods past the Atures Rapids on the Orinoco River in the late 19th century (mostly rubber
Rubber
Natural rubber, also called India rubber or caoutchouc, is an elastomer that was originally derived from latex, a milky colloid produced by some plants. The plants would be ‘tapped’, that is, an incision made into the bark of the tree and the sticky, milk colored latex sap collected and refined...
). Now the economy is supported by both national and international tourism
Tourism
Tourism is travel for recreational, leisure or business purposes. The World Tourism Organization defines tourists as people "traveling to and staying in places outside their usual environment for not more than one consecutive year for leisure, business and other purposes".Tourism has become a...
. Also based here is the Venezuelan army and navy, conducting a continuous low level campaign against incursions and drug-runners from nearby Colombia. The climate is equatorial and the surrounding rainforest
Rainforest
Rainforests are forests characterized by high rainfall, with definitions based on a minimum normal annual rainfall of 1750-2000 mm...
s are some of the worlds least explored and most untouched. The nearby forested mountains (Tepuis) contain some of the worlds least investigated micro systems. 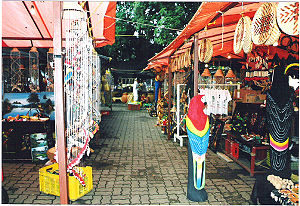 Two hundred kilometers to the south is one of the natural world's great wonders, the Casiquiare canal
Casiquiare canal
The Casiquiare river is a distributary of the upper Orinoco flowing southward into the Rio Negro, in Venezuela, South America. As such, it forms a unique natural canal between the Orinoco and Amazon river systems. It is the largest river on the planet that links two major river systems, a...
, a waterway that links South America's two greatest river systems, the Amazon
Amazon River
The Amazon of South America is the second longest river in the world and by far the largest by waterflow with an average discharge greater than the next seven largest rivers combined...
and the Orinoco
Orinoco
The Orinoco is one of the longest rivers in South America at . Its drainage basin, sometimes called the Orinoquia, covers , with 76.3% of it in Venezuela and the remainder in Colombia...
. This was first reported in the 17th century and explored in 1800 by naturalist Alexander von Humboldt
Alexander von Humboldt
Friedrich Wilhelm Heinrich Alexander Freiherr von Humboldt was a German naturalist and explorer, and the younger brother of the Prussian minister, philosopher and linguist Wilhelm von Humboldt...
, who commented on the recent extinction of the Aturès Indians for whom the Atures Rapids had been named. The water in the Casiquiare flows from the Orinoco River into the Rio Negro, tributary of the Amazon, though much more is gathered en route from numerous tributaries. Nowadays tourists can organise a trip along it from Puerto Ayacucho.

90 km to the east is the second highest waterfall in Venezuela, the 2,200 ft (670 m) Yutaje Falls
Yutaje Falls
The Yutaje Falls is the second-highest waterfall in Venezuela. It is 2,200 ft in height.-External links:**...
. Nearby is the Yutaje Tourist Lodge with its own airstrip in the jungle. Walks and river trips can be undertaken from here in the nearby selva. Of note is the large population of greenwing macaws, Ara chloroptera. There are also jaguar
Jaguar
The jaguar is a big cat, a feline in the Panthera genus, and is the only Panthera species found in the Americas. The jaguar is the third-largest feline after the tiger and the lion, and the largest in the Western Hemisphere. The jaguar's present range extends from Southern United States and Mexico...
s, pink river dolphins, numerous monkey
Monkey
A monkey is a primate, either an Old World monkey or a New World monkey. There are about 260 known living species of monkey. Many are arboreal, although there are species that live primarily on the ground, such as baboons. Monkeys are generally considered to be intelligent. Unlike apes, monkeys...
s and other bird life.

The inhabitants are mostly mestizo
Mestizo
Mestizo is a term traditionally used in Latin America, Philippines and Spain for people of mixed European and Native American heritage or descent...
– mixed indigenous and Spanish blood. There are a number of local indigenous tribes including the Yanomami, the Panare, the Bari, Piaroa
Piaroa
The Piaroa are an indigenous American ethnic group living along the banks of the Orinoco River and its tributaries in present day Venezuela, and in a few scattered locations elsewhere in Venezuela and in Colombia...
, and Guajibo (also known as Jibis). There is little traffic on the river these days. There is a range of medium and low cost hotels. While the city itself is not generally considered attractive, most visitors agree that the surrounding country is magnificent.

Puerto Ayacucho is served by the small Cacique Aramare Airport
Cacique Aramare Airport
Cacique Aramare Airport is an airport serving Puerto Ayacucho, the capital city of the state of Amazonas in Venezuela. It is also known as Casique Aramare Airport.- Facilities :...
, and has good bus connections to San Fernando
San Fernando de Apure
San Fernando de Apure is a city in Apure State in Venezuela. The population of the municipality area is 175,056 . The 18th century exports included heron feathers and animal hides....
, El Burro, San Félix and Ciudad Bolívar
Ciudad Bolívar
Ciudad Bolívar is the capital of Venezuela's southeastern Bolivar State. It was founded with the name Angostura in 1764, renamed in 1846, and, as of 2010, had an estimated population of 350,691....
.
The source of this article is wikipedia, the free encyclopedia.  The text of this article is licensed under the GFDL.