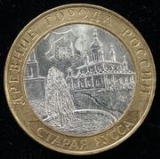 Encyclopedia
Staraya Russa is a town in Novgorod Oblast
Novgorod Oblast
Novgorod Oblast is a federal subject of Russia , located between Moscow and Saint Petersburg. Its administrative center is the city of Veliky Novgorod. Some of the oldest Russian cities, including Veliky Novgorod and Staraya Russa, are located there...
, Russia
Russia
Russia or , officially known as both Russia and the Russian Federation , is a country in northern Eurasia. It is a federal semi-presidential republic, comprising 83 federal subjects...
, located 99 kilometres (61.5 mi) south of Veliky Novgorod
Veliky Novgorod
Veliky Novgorod is one of Russia's most historic cities and the administrative center of Novgorod Oblast. It is situated on the M10 federal highway connecting Moscow and St. Petersburg. The city lies along the Volkhov River just below its outflow from Lake Ilmen...
. It is a wharf
Wharf
A wharf or quay is a structure on the shore of a harbor where ships may dock to load and unload cargo or passengers.Such a structure includes one or more berths , and may also include piers, warehouses, or other facilities necessary for handling the ships.A wharf commonly comprises a fixed...
on the Polist River
Polist River
The Polist River is a river in Novgorod Oblast, Russia, and a tributary of the Lovat River. It starts from Polisto Lake, flows northeast, and joins the Lovat at its delta. The historic town of Staraya Russa is situated upon the Polist. The river is navigable downstream of Staraya Russa....
in the Lake Ilmen
Lake Ilmen
Ilmen is a historically important lake in the Novgorod Oblast of Russia, formerly a vital part of the Trade route from the Varangians to the Greeks. The city of Novgorod lies six kilometers below the lake's outflow....
basin
Drainage basin
A drainage basin is an extent or an area of land where surface water from rain and melting snow or ice converges to a single point, usually the exit of the basin, where the waters join another waterbody, such as a river, lake, reservoir, estuary, wetland, sea, or ocean...
. It serves as the administrative center of Starorussky District
Starorussky District
Starorussky District is an administrative district , one of the 21 in Novgorod Oblast, Russia....
, although administratively it is not a part of it. Its population is

The wooden fortifications of Russa burned to ashes in 1190 and 1194 and were replaced by the stone fortress after the last fire. In 1478, it was incorporated into Muscovy together with Novgorod. The word Staraya (Old) was prefixed to the name in the 15th century, to distinguish it from newer settlements called Russa.

When Ivan the Terrible ascended the throne in 1533, Staraya Russa was a populous city. During the Time of Troubles
Time of Troubles
The Time of Troubles was a period of Russian history comprising the years of interregnum between the death of the last Russian Tsar of the Rurik Dynasty, Feodor Ivanovich, in 1598, and the establishment of the Romanov Dynasty in 1613. In 1601-1603, Russia suffered a famine that killed one-third...
it was held by Polish brigands and heavily depopulated. Only 38 people lived there in 1613.

In 1824, Tsar
Tsar
Tsar is a title used to designate certain European Slavic monarchs or supreme rulers. As a system of government in the Tsardom of Russia and Russian Empire, it is known as Tsarist autocracy, or Tsarism...
Alexander I
Alexander I of Russia
Alexander I of Russia , served as Emperor of Russia from 23 March 1801 to 1 December 1825 and the first Russian King of Poland from 1815 to 1825. He was also the first Russian Grand Duke of Finland and Lithuania....
created military settlements near Staraya Russa. In 1831, the area participated in the Cholera Riots
Cholera Riots
- Cholera Riots in Russia :The Cholera Riots were the riots of the urban population, peasants and soldiers in Russia in 1830-1831 during the cholera outbreak....
.

The town was fictionalized as Skotoprigonievsk in Dostoyevsky's novel The Brothers Karamazov
The Brothers Karamazov
The Brothers Karamazov is the final novel by the Russian author Fyodor Dostoyevsky. Dostoyevsky spent nearly two years writing The Brothers Karamazov, which was published as a serial in The Russian Messenger and completed in November 1880...
(1879–80). The Soviet authority in Staraya Russa was established on November 5(18), 1917. The city was occupied by the Germans
Germany
Germany , officially the Federal Republic of Germany , is a federal parliamentary republic in Europe. The country consists of 16 states while the capital and largest city is Berlin. Germany covers an area of 357,021 km2 and has a largely temperate seasonal climate...
between August 9, 1941 and February 18, 1944
Operation Barbarossa
Operation Barbarossa was the code name for Germany's invasion of the Soviet Union during World War II that began on 22 June 1941. Over 4.5 million troops of the Axis powers invaded the USSR along a front., the largest invasion in the history of warfare...
. Totally destroyed during the war, it was later restored. 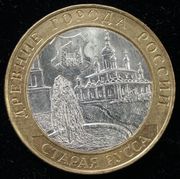 Staraya Russa is a balneologic resort
Resort
A resort is a place used for relaxation or recreation, attracting visitors for holidays or vacations. Resorts are places, towns or sometimes commercial establishment operated by a single company....
, celebrated for its mineral spring
Mineral spring
Mineral springs are naturally occurring springs that produce water containing minerals, or other dissolved substances, that alter its taste or give it a purported therapeutic value...
s used for baths, drinking, and inhalation
Inhalation
Inhalation is the movement of air from the external environment, through the air ways, and into the alveoli....
s; medicinal silt
Silt
Silt is granular material of a size somewhere between sand and clay whose mineral origin is quartz and feldspar. Silt may occur as a soil or as suspended sediment in a surface water body...
mud of Lake Verkhneye and Lake Sredneye and mud from artificial reservoirs. A summer residence of the Russian novelist Fyodor Dostoyevsky, who wrote his novels The Brothers Karamazov
The Brothers Karamazov
The Brothers Karamazov is the final novel by the Russian author Fyodor Dostoyevsky. Dostoyevsky spent nearly two years writing The Brothers Karamazov, which was published as a serial in The Russian Messenger and completed in November 1880...
and The Possessed there, is open to visitors as a museum
Museum
A museum is an institution that cares for a collection of artifacts and other objects of scientific, artistic, cultural, or historical importance and makes them available for public viewing through exhibits that may be permanent or temporary. Most large museums are located in major cities...
.

Monuments include the Transfiguration monastery, which includes a cathedral built in 70 days in 1198 and partly rebuilt in the 15th century, and several 17th-century buildings and churches. The principal city cathedral (1678) is dedicated to the Resurrection
Resurrection
Resurrection refers to the literal coming back to life of the biologically dead. It is used both with respect to particular individuals or the belief in a General Resurrection of the dead at the end of the world. The General Resurrection is featured prominently in Jewish, Christian, and Muslim...
of Christ. Other notable churches are consecrated to St. George (1410) (which church was the family church of the Dostoyevsky family), Mina the Martyr (14th century), and the Holy Trinity (1676).