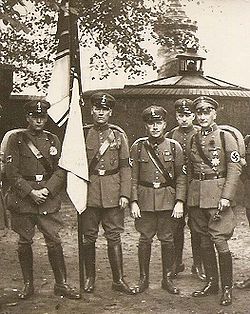 The Stahlhelm, Bund der Frontsoldaten (Steel Helmet, League of Frontline Soldiers) also known in short form as Der Stahlhelm (The Steel Helmet) was one of the many paramilitary
Paramilitary
A paramilitary is a force whose function and organization are similar to those of a professional military, but which is not considered part of a state's formal armed forces....
organizations that arose after the defeat of World War I
World War I
World War I , which was predominantly called the World War or the Great War from its occurrence until 1939, and the First World War or World War I thereafter, was a major war centred in Europe that began on 28 July 1914 and lasted until 11 November 1918...
in the Weimar Republic
Weimar Republic
The Weimar Republic is the name given by historians to the parliamentary republic established in 1919 in Germany to replace the imperial form of government...
. It operated, in general, as the armed branch of the German National People's Party
German National People's Party
The German National People's Party was a national conservative party in Germany during the time of the Weimar Republic. Before the rise of the NSDAP it was the main nationalist party in Weimar Germany composed of nationalists, reactionary monarchists, völkisch, and antisemitic elements, and...
(DNVP) so it was placed generally at DNVP gatherings in the position of (armed) Protector of the Hall (Saalschutz). Theodor Duesterberg
Theodor Duesterberg
Theodor Duesterberg was a leader of the Stahlhelm, Bund der Frontsoldaten, in Germany prior to the Nazi seizure of power.-Background:Born the son of an army surgeon in Darmstadt, Duesterberg entered the Prussian Army in 1893 after training in the cadet corps. In 1900, Duesterberg was part of the...
and Franz Seldte
Franz Seldte
Franz Seldte was cofounder of the German Stahlhelm paramilitary organization, a Nazi politician, and Minister for Labour of the German Reich from 1933 to 1945.-Life:...
were the founders.

The Stahlhelm
Stahlhelm
Stahlhelm is German for "steel helmet". The Imperial German Army began to replace the traditional boiled-leather Pickelhaube with the Stahlhelm during World War I in 1916...
was founded at the end of 1918 partly by Franz Seldte
Franz Seldte
Franz Seldte was cofounder of the German Stahlhelm paramilitary organization, a Nazi politician, and Minister for Labour of the German Reich from 1933 to 1945.-Life:...
in the city of Magdeburg
Magdeburg
Magdeburg , is the largest city and the capital city of the Bundesland of Saxony-Anhalt, Germany. Magdeburg is situated on the Elbe River and was one of the most important medieval cities of Europe....
. Its journal, Stahlhelm, was edited by Count Hans-Jürgen von Blumenthal
Hans-Jürgen von Blumenthal
Hans-Jürgen Graf von Blumenthal was a German aristocrat and Army officer in World War II who was executed by the Nazi régime for his role in the July 20 Plot to assassinate Adolf Hitler.-Biography:...
, later hanged for his part in the July 20 plot
July 20 Plot
On 20 July 1944, an attempt was made to assassinate Adolf Hitler, Führer of the Third Reich, inside his Wolf's Lair field headquarters near Rastenburg, East Prussia. The plot was the culmination of the efforts of several groups in the German Resistance to overthrow the Nazi-led German government...
. The organization was a rallying point for nationalistic
Nationalism
Nationalism is a political ideology that involves a strong identification of a group of individuals with a political entity defined in national terms, i.e. a nation. In the 'modernist' image of the nation, it is nationalism that creates national identity. There are various definitions for what...
and anti-Weimar elements. Within the organization a worldview oriented toward the prior imperial regime predominated. Jewish veterans were denied admission and formed a separate Reichsbund jüdischer Frontsoldaten
Reichsbund jüdischer Frontsoldaten
The Reichsbund jüdischer Frontsoldaten was founded in Germany, February 1919, by Leo Löwenstein. Its purpose was opposition to the renewed spread of antisemitic thought which began at that time; one of the standard antisemitic arguments was that Jews were supposedly disloyal to the countries they...
. From 1924 on, in several subsidiary organizations, new recruits and veterans with front line experience would provide a standing armed force in support of the Reichswehr
Reichswehr
The Reichswehr formed the military organisation of Germany from 1919 until 1935, when it was renamed the Wehrmacht ....
beyond the 100,000 allowed by the Treaty of Versailles
Treaty of Versailles
The Treaty of Versailles was one of the peace treaties at the end of World War I. It ended the state of war between Germany and the Allied Powers. It was signed on 28 June 1919, exactly five years after the assassination of Archduke Franz Ferdinand. The other Central Powers on the German side of...
. With 500,000 members in 1930, the Stahlhelm was the largest paramilitary organization of Weimar Germany.

Financing was provided by the Deutsche Herrenklub, elements of the Ostlbien landed gentry
Landed gentry
Landed gentry is a traditional British social class, consisting of land owners who could live entirely off rental income. Often they worked only in an administrative capacity looking after the management of their own lands....
, and like-minded entrepreneurs.

Although the Stalhelm was officially a non-party entity and above party politics, after 1929 it took on an anti-republican and anti-democratic character. Its goals were a German Dictatorship, the preparation of a Revanchist program, and the direction of local anti-parliamentarian action. For this reason its members distinguished themselves from the NSDAP as "German Fascists". Among their further demands were the establishment of a Greater Germanic People's Reich, struggle against Social Democracy, the "mercantilism of the Jews" and the general liberal democratic worldview, and attempted without success to place candidates favorable to the politics of a German expansion to the East.

In 1929 the Stahlhelm joined the Peoples Initiative Against the Young-Plan to demonstrate against the Young Plan
Young Plan
The Young Plan was a program for settlement of German reparations debts after World War I written in 1929 and formally adopted in 1930. It was presented by the committee headed by American Owen D. Young. After the Dawes Plan was put into operation , it became apparent that Germany could not meet...
. The Stahlhelm joined the DNVP, NSDAP under Adolf Hitler
Adolf Hitler
Adolf Hitler was an Austrian-born German politician and the leader of the National Socialist German Workers Party , commonly referred to as the Nazi Party). He was Chancellor of Germany from 1933 to 1945, and head of state from 1934 to 1945...
and Alldeutscher Verband to form the Harzburger Front, which was a united right-wing front against the Weimar Republic. In the presidential elections of 1932 Theodor Duesterberg
Theodor Duesterberg
Theodor Duesterberg was a leader of the Stahlhelm, Bund der Frontsoldaten, in Germany prior to the Nazi seizure of power.-Background:Born the son of an army surgeon in Darmstadt, Duesterberg entered the Prussian Army in 1893 after training in the cadet corps. In 1900, Duesterberg was part of the...
was the Stalhelm candidate.

A raid with the intention of disarmament by the SA on Stahlhelm in Braunschweig that took place on 27 March 1933 is characteristic of the pressure applied by the NSDAP on Stalhelm in this period, the so-called Stahlhelm Putsch.

In January 1933 Seldte became Reichsminister for Labor in Hitler's cabinet. In April 1933, he joined the SA
Sturmabteilung
The Sturmabteilung functioned as a paramilitary organization of the National Socialist German Workers' Party . It played a key role in Adolf Hitler's rise to power in the 1920s and 1930s...
.

After their assumption of power, there were massive attempts by the Nazis to integrate Stahhelm into the NSDAP, finally succeeding in 1934 in the "voluntary Gleichschaltung
Gleichschaltung
Gleichschaltung , meaning "coordination", "making the same", "bringing into line", is a Nazi term for the process by which the Nazi regime successively established a system of totalitarian control and tight coordination over all aspects of society. The historian Richard J...
".
In 1934 the Stahlhelm was renamed Nationalsozialistischer Deutscher Frontkämpferbund (Federation of the National Socialist Frontline-Fighters) and integrated into the Sturmabteilung
Sturmabteilung
The Sturmabteilung functioned as a paramilitary organization of the National Socialist German Workers' Party . It played a key role in Adolf Hitler's rise to power in the 1920s and 1930s...
and, in 1935, it was dissolved by the Nazis, who feared its fundamentally monarchist character.

In 1951 the Stahlhelm Bund der Frontsoldaten was re-created in Cologne
Cologne
Cologne is Germany's fourth-largest city , and is the largest city both in the Germany Federal State of North Rhine-Westphalia and within the Rhine-Ruhr Metropolitan Area, one of the major European metropolitan areas with more than ten million inhabitants.Cologne is located on both sides of the...
. A year later, in 1952, even before his release from prison, Field Marshal Albert Kesselring
Albert Kesselring
Albert Kesselring was a German Luftwaffe Generalfeldmarschall during World War II. In a military career that spanned both World Wars, Kesselring became one of Nazi Germany's most skilful commanders, being one of 27 soldiers awarded the Knight's Cross of the Iron Cross with Oak Leaves, Swords...
was elected as leader federal of the neonazi association, a post he kept till his death in 1960.