Polar front theory was developed by Jacob Bjerknes
Jacob Bjerknes
Jacob Aall Bonnevie Bjerknes was a Norwegian-American meteorologist. -Background:Jacob Aall Bonnevie Bjerknes was born in Stockholm, Sweden. His father was the Norwegian meteorologist Vilhelm Bjerknes, one of the pioneers of modern weather forecasting. His paternal grandfather was noted...
, derived from a dense network of observation sites in Scandinavia
Scandinavia
Scandinavia is a cultural, historical and ethno-linguistic region in northern Europe that includes the three kingdoms of Denmark, Norway and Sweden, characterized by their common ethno-cultural heritage and language. Modern Norway and Sweden proper are situated on the Scandinavian Peninsula,...
during World War I
World War I
World War I , which was predominantly called the World War or the Great War from its occurrence until 1939, and the First World War or World War I thereafter, was a major war centred in Europe that began on 28 July 1914 and lasted until 11 November 1918...
. This theory proposed that the main inflow into a cyclone
Cyclone
In meteorology, a cyclone is an area of closed, circular fluid motion rotating in the same direction as the Earth. This is usually characterized by inward spiraling winds that rotate anticlockwise in the Northern Hemisphere and clockwise in the Southern Hemisphere of the Earth. Most large-scale...
was concentrated along two lines of convergence, one ahead of the low and another trailing behind the low. The trailing convergence zone was referred to as the squall line or cold front. Areas of clouds and rainfall appeared to be focused along this convergence zone. The concept of frontal zones led to the concept of air masses. The nature of the three dimensional structure of the cyclone was conceptualized after the development of the upper air network during the 1940s.

Organized areas of thunder storms activity reinforce pre-existing frontal zones, and they can outrun cold fronts. This outrunning occurs within the westerlies
Westerlies
The Westerlies, anti-trades, or Prevailing Westerlies, are the prevailing winds in the middle latitudes between 30 and 60 degrees latitude, blowing from the high pressure area in the horse latitudes towards the poles. These prevailing winds blow from the west to the east, and steer extratropical...
in a pattern where the upper level jet splits into two streams. The resultant mesoscale convective system
Mesoscale Convective System
A mesoscale convective system is a complex of thunderstorms that becomes organized on a scale larger than the individual thunderstorms but smaller than extratropical cyclones, and normally persists for several hours or more...
(MCS) forms at the point of the upper level split in the wind pattern in the area of best low level inflow. The convection then moves east and toward the equator
Equator
An equator is the intersection of a sphere's surface with the plane perpendicular to the sphere's axis of rotation and containing the sphere's center of mass....
into the warm sector, parallel to low-level thickness lines. When the convection is strong and linear or curved, the MCS is called a squall line, with the feature placed at the leading edge of the significant wind shift and pressure rise. This feature is commonly depicted in the warm season across the United States
United States
The United States of America is a federal constitutional republic comprising fifty states and a federal district...
on surface analyses, as they lie within sharp surface troughs. If squall lines form over arid regions, a duststorm known as a haboob
Haboob
A haboob is a type of intense duststorm carried on an atmospheric gravity current. Haboobs are regularly observed in arid regions throughout the world. They have been observed in the Sahara desert , as well as across the Arabian Peninsula, throughout Kuwait, and in the most arid regions of Iraq...
may result from the high winds in their wake picking up dust from the desert floor. Squall lines are depicted on National Weather Service
National Weather Service
The National Weather Service , once known as the Weather Bureau, is one of the six scientific agencies that make up the National Oceanic and Atmospheric Administration of the United States government...
surface analyses as an alternating pattern of two red dots and a dash labelled "SQLN" or "SQUALL LINE", which are followed by mesoscale high pressure systems. Well behind mature squall lines, a wake low can develop on the back edge of the rain shield, which can lead to a heat burst due to the warming up of the descending air mass which is no longer being rain-cooled.

Squall lines typically bow out due to the formation of a mesoscale high pressure system which forms within the stratiform rain area behind the initial line. This high pressure area
High pressure area
A high-pressure area is a region where the atmospheric pressure at the surface of the planet is greater than its surrounding environment. Winds within high-pressure areas flow outward due to the higher density air near their center and friction with land...
is formed due to strong descending motion behind the squall line, and could come in the form of a downburst
Downburst
A downburst is created by an area of significantly rain-cooled air that, after reaching ground level, spreads out in all directions producing strong winds. Unlike winds in a tornado, winds in a downburst are directed outwards from the point where it hits land or water...
. The pressure difference between the mesoscale high and the lower pressures along the squall line cause high winds, which are strongest where the line is most bowed out. Another indication of the presence of severe weather along a squall line is its morphing into a line echo wave pattern, or LEWP. A LEWP is a special configuration in a line of convective storms that indicates the presence of a low pressure area and the possibility of damaging winds, large hail, and tornadoes. At each kink along the LEWP is a mesoscale low pressure area, which could contain a tornado. In response to very strong outflow southwest of the mesoscale low, a portion of the line bulges outward forming a bow echo. Behind this bulge lies the mesoscale high pressure area. 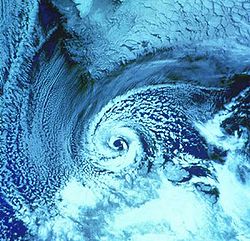 A polar low is a short-lived atmospheric low pressure system (depression) that is found over the ocean areas poleward of the main polar front in both the Northern and Southern Hemispheres. The systems usually have a horizontal length scale of less than 1,000 kilometres (620 mi) and exist for no more than a couple of days. They are part of the larger class of mesoscale weather systems. Polar lows can be difficult to detect using conventional weather reports and are a hazard to high-latitude operations, such as shipping and gas and oil platforms.

A derecho (from Spanish: "derecho" meaning "straight") is a widespread and long-lived, violent convectively induced straight-line windstorm that is associated with a fast-moving band of severe thunderstorms usually taking the form of a bow echo
Bow echo
A bow echo is a term describing the characteristic radar return from a mesoscale convective system that is shaped like an archer’s bow. These systems can produce severe straight-line winds and occasionally tornadoes, causing major damage.-Research:...
. Derechos blow in the direction of movement of their associated storms, similar to a gust front
Outflow boundary
An outflow boundary, also known as a gust front, is a storm-scale or mesoscale boundary separating thunderstorm-cooled air from the surrounding air; similar in effect to a cold front, with passage marked by a wind shift and usually a drop in temperature and a related pressure jump...
, except that the wind is sustained and generally increases in strength behind the "gust" front. A warm weather phenomenon, derechos occur mostly in summer, between May and August in the Northern hemisphere
Northern Hemisphere
The Northern Hemisphere is the half of a planet that is north of its equator—the word hemisphere literally means “half sphere”. It is also that half of the celestial sphere north of the celestial equator...
. They can occur at any time of the year and occur as frequently at night as in the daylight hours.

The traditional criteria that distinguish a derecho from a severe thunderstorm are sustained winds of 58 miles per hour (93.3 km/h) during the storm as opposed to gusts, high or rapidly increasing forward speed, and geographic extent (typically 250 nautical miles (463 km) in length.) In addition, they have a distinctive appearance on radar (bow echo); several unique features, such as the rear inflow notch and bookend vortex, and usually manifest two or more downbursts. Although these storms most commonly occur in North America
North America
North America is a continent wholly within the Northern Hemisphere and almost wholly within the Western Hemisphere. It is also considered a northern subcontinent of the Americas...
, derechos occur elsewhere in the world. Outside North America they may be called by different names. For example, in Bangladesh
Bangladesh
Bangladesh , officially the People's Republic of Bangladesh is a sovereign state located in South Asia. It is bordered by India on all sides except for a small border with Burma to the far southeast and by the Bay of Bengal to the south...
and adjacent portions of India
India
India , officially the Republic of India , is a country in South Asia. It is the seventh-largest country by geographical area, the second-most populous country with over 1.2 billion people, and the most populous democracy in the world...
, a type of storm known as a "Nor'wester
Nor'wester
Nor'wester has been used to describe sumeet several different types of wind.*A New Zealand wind pattern resulting in the Nor'west arch and leading to hot, dry weather on the east coast of the South Island....
" may be a progressive derecho.