Spectator sports require venues or sometimes stadiums
Stadium
A modern stadium is a place or venue for outdoor sports, concerts, or other events and consists of a field or stage either partly or completely surrounded by a structure designed to allow spectators to stand or sit and view the event.)Pausanias noted that for about half a century the only event...
in which the fans may observe a game or event.

Spectator sports have built their own set of culture and traditions including, in the United States, cheerleading
Cheerleading
Cheerleading is a physical activity, sometimes a competitive sport, based on organized routines, usually ranging from one to three minutes, which contain the components of tumbling, dance, jumps, cheers, and stunting to direct spectators of events to cheer on sports teams at games or to participate...
and pre-game and half time entertainment such as fireworks
Fireworks
Fireworks are a class of explosive pyrotechnic devices used for aesthetic and entertainment purposes. The most common use of a firework is as part of a fireworks display. A fireworks event is a display of the effects produced by firework devices...
, particularly for big games such as competition decider events and international tests. The passion of some sports fans also means that there are occasionally spectator incidents. 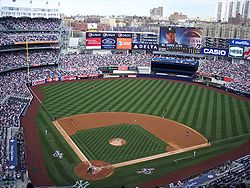 The North American Society for Sport Management (NASSM) devotes much of their annual conference to research addressing the psychology behind a desire to view spectator sports, and how it might be leveraged to increase demand. Much of the research focuses on exploiting a need for vicarious achievement, and a desire within the spectator to project a public image through a declaration of team allegiance.

Separation of the active and the passive, the line between sport and spectator, gives rise to the paradox of the spectator—described by French philosopher Jacques Rancière; which is to seek an opportunity to passively contemplate engaging in an activity, and in doing so, forfeit that life moment one might have used to actually engage in the activity.