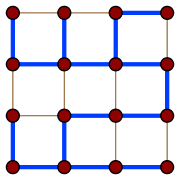 In the mathematical
Mathematics
Mathematics is the study of quantity, space, structure, and change. Mathematicians seek out patterns and formulate new conjectures. Mathematicians resolve the truth or falsity of conjectures by mathematical proofs, which are arguments sufficient to convince other mathematicians of their validity...
field of graph theory
Graph theory
In mathematics and computer science, graph theory is the study of graphs, mathematical structures used to model pairwise relations between objects from a certain collection. A "graph" in this context refers to a collection of vertices or 'nodes' and a collection of edges that connect pairs of...
, a spanning tree T of a connected, undirected graph G is a tree
Tree (graph theory)
In mathematics, more specifically graph theory, a tree is an undirected graph in which any two vertices are connected by exactly one simple path. In other words, any connected graph without cycles is a tree...
composed of all the vertices and some (or perhaps all) of the edges of G. Informally, a spanning tree of G is a selection of edges of G that form a tree spanning every vertex. That is, every vertex
Vertex (graph theory)
In graph theory, a vertex or node is the fundamental unit out of which graphs are formed: an undirected graph consists of a set of vertices and a set of edges , while a directed graph consists of a set of vertices and a set of arcs...
lies in the tree, but no cycles
Cycle (graph theory)
In graph theory, the term cycle may refer to a closed path. If repeated vertices are allowed, it is more often called a closed walk. If the path is a simple path, with no repeated vertices or edges other than the starting and ending vertices, it may also be called a simple cycle, circuit, circle,...
(or loops) are formed.
On the other
hand, every bridge
Bridge (graph theory)
In graph theory, a bridge is an edge whose deletion increases the number of connected components. Equivalently, an edge is a bridge if and only if it is not contained in any cycle....
of G must belong to T.

The number t(G) of spanning trees of a connected graph is an important
invariant
Invariant (mathematics)
In mathematics, an invariant is a property of a class of mathematical objects that remains unchanged when transformations of a certain type are applied to the objects. The particular class of objects and type of transformations are usually indicated by the context in which the term is used...
. In some cases, it is easy to calculate t(G) directly. It is also widely used in data structures in different computer languages.
For example, if G is itself a tree, then t(G)=1, while if G is the
cycle graph
Cycle graph
In graph theory, a cycle graph or circular graph is a graph that consists of a single cycle, or in other words, some number of vertices connected in a closed chain. The cycle graph with n vertices is called Cn...

Cayley's formula is a formula for the number of spanning trees in the complete graph
Complete graph
In the mathematical field of graph theory, a complete graph is a simple undirected graph in which every pair of distinct vertices is connected by a unique edge.-Properties:...

with n vertices. The formula states that

. Another way of stating Cayley's formula is that there are exactly

labelled trees with n vertices. Cayley's formula can be proved using Kirchhoff's matrix-tree theorem or via the
Prüfer code.

, while if G is the n-dimensional hypercube graph

.
These formulae are also consequences of the matrix-tree theorem.

If G is a multigraph
Multigraph
In mathematics, a multigraph or pseudograph is a graph which is permitted to have multiple edges, , that is, edges that have the same end nodes. Thus two vertices may be connected by more than one edge....
and e is an edge of G, then the number t(G) of spanning trees of G satisfies the deletion-contraction recurrence
t(G)=t(G-e)+t(G/e), where G-e is the multigraph obtained by deleting e
and G/e is the contraction
Edge contraction
In graph theory, an edge contraction is an operation which removes an edge from a graph while simultaneously merging together the two vertices it previously connected. Edge contraction is a fundamental operation in the theory of graph minors...
of G by e, where multiple edges arising from this contraction are not deleted.

Parallel algorithms typically take different approaches than BFS or DFS. Halperin and Zwick designed an optimal randomized parallel algorithm that runs in O(log n) time with high probability on EREW PRAM.http://citeseer.ist.psu.edu/652374.html The Shiloach-Vishkin algorithm, due to Yossi Shiloach and Uzi Vishkin
Uzi Vishkin
Uzi Vishkin is a computer scientist at the University of Maryland, College Park, where he is Professor of Electrical and Computer Engineering at the University of Maryland Institute for Advanced Computer Studies . Uzi Vishkin is known for his work in the field of parallel computing...
, is the basis for many parallel implementations.http://citeseer.ist.psu.edu/context/74288/0 Bader and Cong's algorithm is shown to run fast in practice on a variety of graphs.http://portal.acm.org/citation.cfm?id=1196220

The most common distributed algorithm is the Spanning Tree Protocol
Spanning tree protocol
The Spanning Tree Protocol is a network protocol that ensures a loop-free topology for any bridged Ethernet local area network. The basic function of STP is to prevent bridge loops and ensuing broadcast radiation...
, used by OSI link layer
Data link layer
The data link layer is layer 2 of the seven-layer OSI model of computer networking. It corresponds to, or is part of the link layer of the TCP/IP reference model....
devices to create a spanning tree using the existing links as the source graph in order to avoid broadcast storms.
The source of this article is wikipedia, the free encyclopedia.  The text of this article is licensed under the GFDL.