Encyclopedia
Soyuz 3 was a spaceflight
Spaceflight
Spaceflight is the act of travelling into or through outer space. Spaceflight can occur with spacecraft which may, or may not, have humans on board. Examples of human spaceflight include the Russian Soyuz program, the U.S. Space shuttle program, as well as the ongoing International Space Station...
mission launched by the Soviet Union
Soviet Union
The Soviet Union , officially the Union of Soviet Socialist Republics , was a constitutionally socialist state that existed in Eurasia between 1922 and 1991....
on October 26, 1968. For four consecutive days, Commander Georgy Beregovoy piloted the Soyuz 7K-OK
Soyuz 7K-OK
The manned Soyuz spacecraft can be classified into design generations. Soyuz 1 through Soyuz 11 were first-generation vehicles, carrying a crew of up to three without spacesuits and distinguished from those following by their bent solar panels and their use of the Igla automatic docking navigation...
spacecraft through eighty-one orbits of Earth.

The Soviet space program had experienced great success in its early years, but by the mid-1960s the pace of success had grown sluggish. The Soyuz project
Soyuz programme
The Soyuz programme is a human spaceflight programme that was initiated by the Soviet Union in the early 1960s, originally part of a Moon landing project intended to put a Soviet cosmonaut on the Moon...
was intended to rejuvenate the program by pioneering a new phase of spacecraft capability: forging a direct physical link between two independent craft. Soyuz 1
Soyuz 1
Soyuz 1 was a manned spaceflight of the Soviet space program. Launched into orbit on April 23, 1967 carrying cosmonaut Colonel Vladimir Komarov, Soyuz 1 was the first flight of the Soyuz spacecraft...
was launched with the expectation of "union" with the manned satellite Soyuz 2
Soyuz 2
Soyuz 2 was an unpiloted spacecraft in the Soyuz family intended to perform a docking maneuver with Soyuz 3. Although the two craft approached closely, the docking did not take place.-Other uses of name:...
but even before the second craft was launched, it became apparent that the mission would not be possible. Soyuz 1 ended in disaster, with Commander Vladimir Komarov
Vladimir Komarov
Vladimir Mikhaylovich Komarov was a Soviet test pilot, aerospace engineer and cosmonaut in the first group of cosmonauts selected in 1960. He was one of the most highly experienced and well-qualified candidates accepted into "Air Force Group One"....
killed on April 23, 1967. Soyuz 2 with crew Bykovsky, Khrunov, and Yeliseyev did not start, which saved their life, because Soyuz 2 had the same defective parachute system as Soyuz 1. New spaceship Soyuz 2 and 3 were build for new mission in 1968.

The unmanned Soyuz 2 was launched on October 25, 1968, and Soyuz 3 followed it the next afternoon. The mission had been given to Beregovoy, with cosmonaut Vladimir Shatalov
Vladimir Shatalov
Vladimir Aleksandrovich Shatalov is a former Soviet cosmonaut who flew three space missions of the Soyuz programme: Soyuz 4, Soyuz 8, and Soyuz 10....
designated as the backup commander, and Boris Volynov
Boris Volynov
Boris Valentinovich Volynov is a Soviet cosmonaut who flew two space missions of the Soyuz programme: Soyuz 5, and Soyuz 21. He was the first Jewish cosmonaut.-Biography:...
in reserve.
Entering outer space within a half an hour and already near Soyuz 2, Beregovoy gradually guided his craft within docking range (under 200 meters) of the satellite.
The next day, having orbited the earth numerous times, a second rendezvous of similar distance was completed. Just hours later, Soyuz 2 began its descent and was back on earth by 8:00am the next day. Beregovoy continued to orbit, making topographical and meteorological observations for the next two days. Beregevoi also treated television viewers to the first "live" tour of a spaceship interior.

Beregovoy and Soyuz 3 came back to earth on October 30, 1968, after completing eighty-one full orbits of earth. The re-entry vehicle landed near the city of Karaganda
Karaganda
Karagandy , more commonly known by its Russian name Karaganda, , is the capital of Karagandy Province in Kazakhstan. It is the fourth most populous city in Kazakhstan, behind Almaty , Astana and Shymkent, with a population of 471,800 . In the 1940s up to 70% of the city's inhabitants were ethnic...
in Kazakhstan
Kazakhstan
Kazakhstan , officially the Republic of Kazakhstan, is a transcontinental country in Central Asia and Eastern Europe. Ranked as the ninth largest country in the world, it is also the world's largest landlocked country; its territory of is greater than Western Europe...
, fortuitously cushioned by a blizzard's snowfall. Despite subzero temperatures, Beregovoy's landing was so easy he said later that he hardly felt the impact at all.
The Soviets hailed Soyuz 3 as a complete success. Beregovoy was promoted to Major General and named director of the national Center for Cosmonaut Training
Yuri Gagarin Cosmonauts Training Center
The Yu. A. Gagarin State Scientific Research-and-Testing Cosmonaut Training Center is a Russian training facility responsible for training cosmonauts for their space missions...
at Star City
Star City, Russia
Star City is a common name of an area in Moscow Oblast, Russia, which has since the 1960s been home to the Yuri Gagarin Cosmonaut Training Center...
. 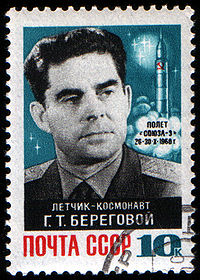 The launch of Soyuz 2 had not been reported by the Soviet Union, although other nations were aware through their own monitors. It was not until Soyuz 3 was safely aloft that an official announcement was made. Contemporary Western news reports described the orbital mission of Soyuz 3 in the same manner as the Soviets, referring to a successful "rendezvous" with Soyuz 2, but characterizing it as a test with no actual ship-to-ship docking planned. This interpretation was largely accepted for years afterward.
With information released after the breakup of the Soviet Union, historians began to reassess the presumed "success" of the mission: the early Soyuz missions had indeed been intended to perform a physical linkage between two spacecraft, and in this they had undeniably failed. Moreover, the fault could be largely ascribed to piloting error by Beregovoy: after a misaligned approach, Beregovoy's ineffective countermeasures burned up so much fuel that the mission simply could not be completed.

The flight of Soyuz 3 had numerous effects on future space exploration both short- and long-term. The flawless recovery of Soyuz 3 left the spacecraft designers with the impression that re-entry and landing systems had been perfected: the crash-landing of the Zond 6
Zond 6
Zond 6, a formal member of the Soviet Zond program and unmanned version of Soyuz 7K-L1 manned moon-flyby spacecraft, was launched on a lunar flyby mission from a parent satellite in Earth parking orbit...
satellite just one month later has been partly attributed to this mistaken sense of security. The value of the outer space survey of earth was a defining step in the development of the Soyuz program's grand strategy: the later evolution of space-based research platforms have roots in Beregovoy's lengthy and meticulous data-collection. Even the failure of the space docking proved an experiential benefit to the Soviet space program: after the demoralizing catastophe of Soyuz 1, the credible achievements and safe return of Soyuz 3 breathed new life into the faltering program. New flights continued apace, and they put the knowledge gained from Soyuz 3 towards missions of increasing audacity and success.
The source of this article is wikipedia, the free encyclopedia.  The text of this article is licensed under the GFDL.