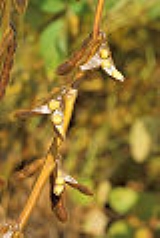 Overview
The soybean or soya bean (UK) (Glycine max) is a species of legume native to East Asia
East Asia
East Asia or Eastern Asia is a subregion of Asia that can be defined in either geographical or cultural terms...
, widely grown for its edible bean
Bean
Bean is a common name for large plant seeds of several genera of the family Fabaceae used for human food or animal feed....
which has numerous uses. The plant is classed as an oilseed rather than a pulse
Pulse (legume)
A pulse is an annual leguminous crop yielding from one to twelve seeds of variable size, shape, and color within a pod. Pulses are used for food and animal feed. The term "pulse", as used by the Food and Agricultural Organization , is reserved for crops harvested solely for the dry seed...
by the Food and Agricultural Organization (FAO).

Fat-free (defatted) soybean meal is a primary, low-cost source of protein for animal feeds and most prepackaged meals
TV dinner
A TV dinner is a prepackaged frozen or chilled meal that usually comes as an individual portion...
; soy vegetable oil
Soybean oil
Soybean oil is a vegetable oil extracted from the seeds of the soybean . It is one of the most widely consumed cooking oils. As a drying oil, processed soybean oil is also used as a base for printing inks and oil paints...
is another product of processing the soybean crop.

What kind of soil is good for planting soybeans?