K-159 was a Project 627A "Kit" (NATO reporting name
NATO reporting name
NATO reporting names are classified code names for military equipment of the Eastern Bloc...
November class
November class submarine
The Project 627 class submarine was the Soviet Union's first class of nuclear-powered submarines. The North Atlantic Treaty Organization used the standard radio communication phonetic alphabet to denote submarine classes...
) nuclear-powered submarine of the Soviet Northern Fleet. Her keel was laid down on 15 August 1962 at the Severodvinsk
Severodvinsk
Severodvinsk is a city in the north of Arkhangelsk Oblast, Russia, located in the delta of the Northern Dvina River, west of Arkhangelsk. Administratively, it is incorporated as a town of oblast significance . Municipally, it is incorporated as Severodvinsk Urban Okrug. The city was founded as...
"Sevmash" Shipyard No. 402. She was launched
Ship naming and launching
The ceremonies involved in naming and launching naval ships are based in traditions thousands of years old.-Methods of launch:There are three principal methods of conveying a new ship from building site to water, only two of which are called "launching." The oldest, most familiar, and most widely...
on 6 June 1963, and commissioned
Ship commissioning
Ship commissioning is the act or ceremony of placing a ship in active service, and may be regarded as a particular application of the general concepts and practices of project commissioning. The term is most commonly applied to the placing of a warship in active duty with its country's military...
on 9 October 1963.

On 2 March 1965, K-159 suffered an accident involving radioactive discharges into her steam generators, almost certainly primary coolant leaks from the tubes into the steam chest and thence into the turbines, contaminating her entire propulsion plant. If so, the leaking tubes were plugged, because she continued to operate for another two years before entering the shipyard from 1967 through 1968 for overhaul and to have her steam generators replaced. She returned to the shipyard from 1970 through 1972 for further repairs and refuelling, and then again from 1979 through 1980 for still more repairs.

K-159 was decommissioned on 30 May 1989 and laid up in Gremikha; her reactors were not defuelled. She remained in layup with little or no maintenance for 14 years. Her outer hull rusted until in many places it had "the strength of foil".

The poor condition of Russia
Russia
Russia or , officially known as both Russia and the Russian Federation , is a country in northern Eurasia. It is a federal semi-presidential republic, comprising 83 federal subjects...
's fleet of decommissioned nuclear submarines concerned many other countries, and in the summer of 2003, five countries made a combined donation of more than US$200 million in support of decommission and disposal of those hulks. In anticipation of receiving those funds, Admiral Gennady Suchkov, Commander of the Northern Fleet, decided to tow all the 16 laid up submarines from Gremikha to shipyards where they would be dismantled. K-159 was the 13th hulk to be towed.

Because K-159s hull was rusted through in so many places, it was kept afloat by spot-welding large empty tanks to her sides as pontoons
Pontoon (boat)
A pontoon is a flotation device with buoyancy sufficient to float itself as well as a heavy load. A pontoon boat is a flattish boat that relies on pontoons to float. Pontoons may be used on boats, rafts, barges, docks, floatplanes or seaplanes. Pontoons may support a platform, creating a raft. A...
. Those tanks, however, were manufactured in the 1940s, were not air-tight, and were no better maintained than the submarine's hull.

On 28 August 2003, K-159 and her pontoons were manned by ten Russian sailors and taken under tow to Polyarny
Polyarny
Polyarny is a closed town in Murmansk Oblast, Russia, situated on the outermost western side of the Kola Bay. Population: -History:It was founded in 1896 and named Alexandrovsk in honor of Tsar Alexander III. Town status was granted to it on , 1899...
. That crew kept the pontoons pressurized and the submarine hull pumped out, but during the early morning hours of 30 August they encountered a squall
Squall
A squall is a sudden, sharp increase in wind speed which is usually associated with active weather, such as rain showers, thunderstorms, or heavy snow. Squalls refer to an increase in the sustained winds over a short time interval, as there may be higher gusts during a squall event...
that ripped away one of the pontoons. K-159 did not sink immediately, but was clearly in distress. Northern Fleet was notified at 0120, and Admiral Suchkov arrived at headquarters 20 minutes later. Suchkov made no attempt to rescue the submarine crew (3). By 0300 the wreck had sunk in the Barents Sea
Barents Sea
The Barents Sea is a marginal sea of the Arctic Ocean, located north of Norway and Russia. Known in the Middle Ages as the Murman Sea, the sea takes its current name from the Dutch navigator Willem Barents...
, 238 meters down, with nine of her crew and 800 kilograms of spent nuclear fuel containing some 20 petabecquerels
Becquerel
The becquerel is the SI-derived unit of radioactivity. One Bq is defined as the activity of a quantity of radioactive material in which one nucleus decays per second. The Bq unit is therefore equivalent to an inverse second, s−1...
(600 kilocuries
Curie
The curie is a unit of radioactivity, defined asThis is roughly the activity of 1 gram of the radium isotope 226Ra, a substance studied by the pioneers of radiology, Marie and Pierre Curie, for whom the unit was named. In addition to the curie, activity can be measured using an SI derived unit,...
) of radioactivity.

The Military Prosecutor General's office brought charges against Captain Second Class Sergei Zhemchuzhnov who was overseeing the towing operation. President of Russia Vladimir Putin
Vladimir Putin
Vladimir Vladimirovich Putin served as the second President of the Russian Federation and is the current Prime Minister of Russia, as well as chairman of United Russia and Chairman of the Council of Ministers of the Union of Russia and Belarus. He became acting President on 31 December 1999, when...
removed Suchkov from service on the recommendation of Navy Chief of Staff Vladimir Kuroyedov
Vladimir Kuroyedov
Fleet Admiral Vladimir Ivanovich Kuroyedov is a former longest-serving Commander-in-Chief of the Russian Navy. Earlier he was Chief of Staff/1st Deputy Commander of the Baltic Fleet, Chief of Staff/1st Deputy Commander of the Pacific Fleet since 1993 and Chief of the Main Staff/1st Deputy...
. Putin appointed Vice Admiral Sergey Simonenko acting Commander of the Northern Fleet. Before that, he headed the headquarters of the Northern Fleet.

The Russian government is considering plans to raise the wreck of K-159. Admiral Kuroyedov believes that "we should not leave nuclear objects lying on the seabed". Initial plans were to do so in August or September 2004, but they were postponed. In 2007, the British Ministry of Defence
Ministry of Defence (United Kingdom)
The Ministry of Defence is the United Kingdom government department responsible for implementation of government defence policy and is the headquarters of the British Armed Forces....
began preparations for a salvage operation As part of that recovery planning, the Scottish company Adus was hired to evaluate the wreck. A high-resolution sonar generated image of K-159 was published on 1 April 2010. http://www.wired.co.uk/wired-magazine/archive/2010/05/start/grounded-submarine-photographed-with-sonar.aspx

Shortly after the loss of the submarine, the widows of four of the nine deceased submariners filed a lawsuit against the Russian Defence Ministry demanding compensation of one million ruble
Russian ruble
The ruble or rouble is the currency of the Russian Federation and the two partially recognized republics of Abkhazia and South Ossetia. Formerly, the ruble was also the currency of the Russian Empire and the Soviet Union prior to their breakups. Belarus and Transnistria also use currencies with...
s (about $37,500) each in moral damages, a lawyer acting for them said. The Ministry objected to the suit, saying that the widows should press charges against Suchkov, who was convicted by a court martial of criminal negligence
Criminal negligence
In the criminal law, criminal negligence is one of the three general classes of mens rea element required to constitute a conventional as opposed to strict liability offense. It is defined as an act that is:-Concept:...
leading to the submariners' deaths.http://en.rian.ru/russia/20060927/54316975.html 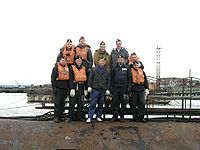 The bodies of Smirnov and Zhadan were recovered immediately. Tsibul'skij was rescued alive and recovered in the Severomorsk Military Hospital. The other seven were presumably trapped in the wreck.