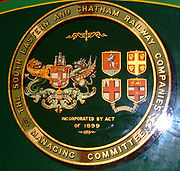 The companies had competed extensively over the same area, with some of the bitterest conflicts ever seen between British railway companies. Competing routes to the same destination were built; thus many towns in Kent were served by both companies, and left with a legacy of two stations and services to multiple London termini.

By the end of the 19th century the SER and LC&DR had fought over a small and not particularly lucrative territory for 40 years. Both were notorious for the poor quality of their services and decrepitude of their stock, and the struggles had driven both companies to the verge of bankruptcy. It became inevitable that they must combine or succumb.

The SE&CR was formed on 1 January 1899, when the SER and LC&DR formed a "managing committee" comprising the directors of both companies. This effectively merged the two companies, although officially they remained separate, with the receipts split 59% to SER and 41% LC&DR, until the Grouping; this was to avoid the financial costs and risks of a formal merger.

The SE&CR instituted numerous connections between the two largely separate networks. New services were introduced to reap the benefits of joint working. The most significant step was the construction of a junction where the SER and LC&DR's respective mainlines crossed near Bickley and St Mary Cray, east of Bromley (circa 1902-04). LC&DR's terminating line via Maidstone to Ashford was connected to the SER hub at Ashford. The SER branch from Strood to Chatham alongside the LC&DR's main line to Chatham was closed prior to World War One. Later the overlapping network on the Isle of Thanet (Margate-Broadstairs-Ramsgate) was extensively rationalised by the Southern Railway. Service cuts under BR saw Gravesend lose its second station.

After the formation of the SE&CR, three minor lines were built before the SE&CR became one of the constituent parts of the Southern Railway in 1923. They were:

The LC&DR's works at Longhedge
Longhedge Railway Works (Battersea)
Longhedge railway works was a locomotive and carriage works built by the London, Chatham and Dover Railway in the borough of Battersea, South London to serve their new London terminus at Victoria...
, Battersea
Battersea
Battersea is an area of the London Borough of Wandsworth, England. It is an inner-city district of South London, situated on the south side of the River Thames, 2.9 miles south-west of Charing Cross. Battersea spans from Fairfield in the west to Queenstown in the east...
was closed in 1911 and production was concentrated at Ashford
Ashford railway works
Ashford railway works was in the town of Ashford in the county of Kent in England.-South Eastern Railway:Ashford locomotive works was built by the South Eastern Railway on a new site in 1847, replacing an earlier locomotive repair facility at New Cross in London...
. Harry Wainwright
Harry Wainwright
Harry Smith Wainwright was the Locomotive, Carriage and Wagon Superintendent of the South Eastern and Chatham Railway from 1899 to 1913. He is best known for a series of simple but competent locomotives produced under his direction at the company's Ashford railway works in the early years of the...
was replaced by Richard Maunsell
Richard Maunsell
Richard Edward Lloyd Maunsell held the post of Chief Mechanical Engineer of the South Eastern and Chatham Railway from 1913 until the 1923 Grouping and then the post of CME of the Southern Railway in England until 1937....
as Locomotive Superintendent in 1913.

Prior to grouping, with the development and implementation by competitors (notably L&SWR
London and South Western Railway
The London and South Western Railway was a railway company in England from 1838 to 1922. Its network extended from London to Plymouth via Salisbury and Exeter, with branches to Ilfracombe and Padstow and via Southampton to Bournemouth and Weymouth. It also had many routes connecting towns in...
, LB&SCR
London, Brighton and South Coast Railway
The London, Brighton and South Coast Railway was a railway company in the United Kingdom from 1846 to 1922. Its territory formed a rough triangle, with London at its apex, practically the whole coastline of Sussex as its base, and a large part of Surrey...
, various "Tube
London Underground
The London Underground is a rapid transit system serving a large part of Greater London and some parts of Buckinghamshire, Hertfordshire and Essex in England...
" companies) and electric trams) of electric traction
Railway electric traction
Railway electric traction describes the various types of locomotive and multiple units that are used on electrification systems around the world.-History:...
in the early twentieth century, SECR planned to start electrifying
Railway electrification in Great Britain
Railway electrification in Great Britain started towards of the 19th century. A great range of voltages have been used in the intervening period using both overhead lines and third rails, however the most common standard for mainline services is now 25 kV AC using overhead lines and the...
its lines. The proposed method of electrification
Railway electrification system
A railway electrification system supplies electrical energy to railway locomotives and multiple units as well as trams so that they can operate without having an on-board prime mover. There are several different electrification systems in use throughout the world...
was 1500V DC using two additional rails - i.e. four rails (like London Underground and L&NWR
London and North Western Railway
The London and North Western Railway was a British railway company between 1846 and 1922. It was created by the merger of three companies – the Grand Junction Railway, the London and Birmingham Railway and the Manchester and Birmingham Railway...
), this very high voltage (for rail track level systems) was only used in elsewhere on the L&YR's 1200V DC side contact third rail line from Manchester Victoria to Bury. Grouping
Railways Act 1921
The Railways Act 1921, also known as the Grouping Act, was an enactment by the British government of David Lloyd George intended to stem the losses being made by many of the country's 120 railway companies, move the railways away from internal competition, and to retain some of the benefits which...
in 1923 led to Southern Railway's
Southern Railway (Great Britain)
The Southern Railway was a British railway company established in the 1923 Grouping. It linked London with the Channel ports, South West England, South coast resorts and Kent...
adopting L&SWR's standard of 660V DC third rail over SECR's network.

The SE&CR operated a number of ships on cross channel services.

Ships built for the South Eastern and Chatham Railway.

Other ships operated by the South Eastern and Chatham Railway