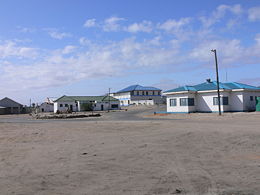 Port Nolloth is a town and domestic seaport in the Namaqualand
Namaqualand
Namaqualand is an arid region of Namibia and South Africa, extending along the west coast over and covering a total area of 170,000 square miles/440,000 km². It is divided by the lower course of the Orange River into two portions - Little Namaqualand to the south and Great Namaqualand to the...
region on the northwestern coast of South Africa
South Africa
The Republic of South Africa is a country in southern Africa. Located at the southern tip of Africa, it is divided into nine provinces, with of coastline on the Atlantic and Indian oceans...
, 89 miles northwest of Springbok
Springbok, Northern Cape
Springbok is the largest town in the Namaqualand area in the Northern Cape province of South Africa. it had a population of 10,294. Springbok is located on the N7 national road which connects the Cape with Namibia, and at the western end of the N14, which connects it with Upington and Pretoria...
.

The port was previously a transshipment
Transshipment
Transshipment or Transhipment is the shipment of goods or containers to an intermediate destination, and then from there to yet another destination....
point for copper from the Okiep mines, and diamonds from the Namaqua
Namaqua
Nama are an African ethnic group of South Africa, Namibia and Botswana. They traditionally speak the Nama language of the Khoe-Kwadi language family, although many Nama now speak Afrikaans. The Nama are the largest group of the Khoikhoi people, most of whom have largely disappeared as a group,...
coast. Since the 1970s the principal seagoing activities have been fishing and small-vessel tourism. Today the town is a sleepy commercial hub with a number of holiday homes and a caravan park at the adjacent McDougalls Bay. It is also a gateway to the Richtersveld National Park, located 100 miles (160 km) to the north along the Orange River
Orange River
The Orange River , Gariep River, Groote River or Senqu River is the longest river in South Africa. It rises in the Drakensberg mountains in Lesotho, flowing westwards through South Africa to the Atlantic Ocean...
.

The bay upon which the port sits was known by the indigenous Namaqua people as Aukwatowa ("Where the water took away the old man"). Its location was marked by Portuguese
Portuguese people
The Portuguese are a nation and ethnic group native to the country of Portugal, in the west of the Iberian peninsula of south-west Europe. Their language is Portuguese, and Roman Catholicism is the predominant religion....
explorer Bartolomeu Dias
Bartolomeu Dias
Bartolomeu Dias , a nobleman of the Portuguese royal household, was a Portuguese explorer who sailed around the southernmost tip of Africa in 1488, the first European known to have done so.-Purposes of the Dias expedition:...
on his epic voyage around the Cape of Good Hope
Cape of Good Hope
The Cape of Good Hope is a rocky headland on the Atlantic coast of the Cape Peninsula, South Africa.There is a misconception that the Cape of Good Hope is the southern tip of Africa, because it was once believed to be the dividing point between the Atlantic and Indian Oceans. In fact, the...
in 1487. It was the last landfall he sighted before a wild storm blew his ship off course and out to sea for thirteen days.

The land surrounding the bay remained virtually uninhabited until James Alexander
James Edward Alexander
Major-General Sir James Edward Alexander KStJ was a British soldier, traveller and author.-Background:Born in Clackmannanshire, he was the eldest son of Edward Alexander and his second wife, daughter of John Glas...
's discovery in 1852 of copper at Okiep, a hundred miles inland from the bay. The Cape Colony
Cape Colony
The Cape Colony, part of modern South Africa, was established by the Dutch East India Company in 1652, with the founding of Cape Town. It was subsequently occupied by the British in 1795 when the Netherlands were occupied by revolutionary France, so that the French revolutionaries could not take...
administration immediately commenced a survey of the coastline to locate a suitable harbour from which to ship the copper ore. Aukwatowa bay was surveyed in 1854 and selected for a future port based largely on its sheltered aspect from offshore winds. 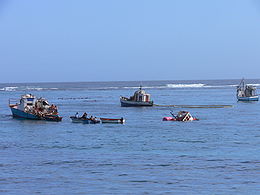 A rudimentary quay was built in 1855, wide enough to accommodate the horse-drawn wagons that carried the copper ore from Okiep to the port. A small service town rapidly developed and was named Port Nolloth by Cape Colony Governor Sir George Grey, in honour of its surveyor, Captain M.S. Nolloth.

In 1874 the wagons were replaced by a 96-mile long narrow gauge railway between the mine and the port and the quay was lengthened to 220 feet. However, while the railway significantly improved overland transport to the port, the increasing size of ore carriers began to create navigational difficulties in the bay. By the early 1900s the sheltered aspect that had attracted surveyors fifty years before was proving too difficult for larger vessels, several of which ran aground on a coastal reef extending across the channel. The difficulties of the harbour and expensive ship repairs encouraged the development of an alternative transport route and by 1910 most Okiep ore was being carried by truck to the railhead at Bitterfontein
Bitterfontein
Bitterfontein is a village in the Knersvlakte, the northernmost area of the Western Cape province of South Africa, north of Cape Town. It is the railhead of a line from Cape Town; ore from the copper mines at Okiep is transferred there from road transport to the railway...
in preference to shipments direct from the port. 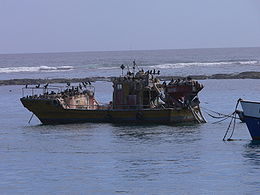 With ore shipments declining, the Port was revived in 1926 with the discovery of alluvial diamonds along the coast to the north and south of the town. A rush of prospectors and investment re-established Port Nolloth as a substantial service centre, even as copper shipments ceased altogether in 1944.

The inability of larger vessels to enter the port led to a series of disasters as ships attempted to anchor offshore rather than seek shelter in poor weather. In April 1947 the 205-ton South African freighter Border ran aground to the south of the port while attempting to ride out a storm. In December 1950 the 400-ton freighter Bechuana suffered a similar fate.

In the years following these wrecks, efforts were made to improve port access with the underwater blasting of the coastal reef. The attempt was partially successful but the bay remained a challenging prospect. Demand for port access also declined in the 1970s as the volume of diamond exports decreased.


Closure of the Port

After 1976 large-scale shipping at Port Nolloth was reduced to a single tanker, the Oranjemund, which visited the port fortnightly to exchange supplies for fish and diamonds. 61 metres long but with a draft of only 4.4 metres, the Oranjemund was well-suited for the navigational difficulties of the bay. However, the gradual reduction in diamond discoveries made the long voyage from Cape Town uneconomic, and the Oranjemund was withdrawn from service in 2006.. Port activity now consists of minor fishing vessels and recreational boating. Silting of the harbour floor has further reduced the draft, and only the smallest vessels can access the quay.
The source of this article is wikipedia, the free encyclopedia.  The text of this article is licensed under the GFDL.