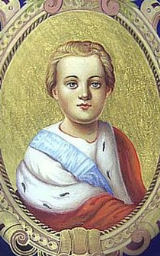 Encyclopedia
Ivan VI Antonovich of Russia (Ivan Antonovich; ; – ), was proclaimed Emperor of Russia
Russian Empire
The Russian Empire was a state that existed from 1721 until the Russian Revolution of 1917. It was the successor to the Tsardom of Russia and the predecessor of the Soviet Union...
in 1740, as an infant, although he never actually reigned. Within less than a year, he was overthrown by the Empress Elizabeth of Russia, Peter the Great's daughter. Ivan spent the rest of his life as a prisoner and was killed by his guards during an attempt made to free him.


Fall from the throne and imprisonment

Thirteen months later, a coup d'état
Coup d'état
A coup d'état state, literally: strike/blow of state)—also known as a coup, putsch, and overthrow—is the sudden, extrajudicial deposition of a government, usually by a small group of the existing state establishment—typically the military—to replace the deposed government with another body; either...
placed the Empress Elizabeth on the throne (6 December 1741), and Ivan and his family were imprisoned in the fortress of Dünamünde (13 December 1742) after a preliminary detention at Riga
Riga
Riga is the capital and largest city of Latvia. With 702,891 inhabitants Riga is the largest city of the Baltic states, one of the largest cities in Northern Europe and home to more than one third of Latvia's population. The city is an important seaport and a major industrial, commercial,...
, whence the new Empress had at first decided to send them home to Brunswick. In June 1744, following the Lopukhina Affair, they transferred him to Kholmogory
Kholmogory
Kholmogory is a historic village and the administrative center of Kholmogorsky District of Arkhangelsk Oblast, Russia. It lies on the left bank of the Northern Dvina, along the Kholmogory Highway, 75 km southeast of Arkhangelsk and 90 km north of the Antonievo-Siysky Monastery. The name...
on the White Sea
White Sea
The White Sea is a southern inlet of the Barents Sea located on the northwest coast of Russia. It is surrounded by Karelia to the west, the Kola Peninsula to the north, and the Kanin Peninsula to the northeast. The whole of the White Sea is under Russian sovereignty and considered to be part of...
, where Ivan, isolated from his family, and seeing no one other than his gaoler (jailer), remained for the next twelve years. When rumours of his confinement at Kholmogory became more prevalent, he was secretly transferred to the fortress of Shlisselburg
Shlisselburg
Shlisselburg is a town in Leningrad Oblast, Russia, situated at the head of the Neva River on Lake Ladoga, east of St. Petersburg. From 1944 to 1992, it was known as Petrokrepost...
(1756), where he was still more rigorously guarded, not even the very commandant of the fortress knowing the identity of "a certain prisoner".

On the accession of Peter III
Peter III of Russia
Peter III was Emperor of Russia for six months in 1762. He was very pro-Prussian, which made him an unpopular leader. He was supposedly assassinated as a result of a conspiracy led by his wife, who succeeded him to the throne as Catherine II.-Early life and character:Peter was born in Kiel, in...
(1762) the situation of Ivan seemed about to improve, for the new emperor visited and sympathised with his plight; but Peter himself lost power
Power (sociology)
Power is a measurement of an entity's ability to control its environment, including the behavior of other entities. The term authority is often used for power perceived as legitimate by the social structure. Power can be seen as evil or unjust, but the exercise of power is accepted as endemic to...
a few weeks later. New instructions were sent to Ivan’s guardian, who received orders to place manacles on his charge, and even to scourge
Scourge
A scourge is a whip or lash, especially a multi-thong type used to inflict severe corporal punishment or self-mortification on the back.-Description:...
him should he become refractory. 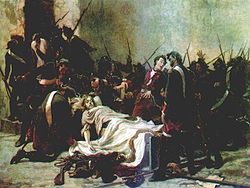 On the accession of Catherine II
Catherine II of Russia
Catherine II, also known as Catherine the Great , Empress of Russia, was born in Stettin, Pomerania, Prussia on as Sophie Friederike Auguste von Anhalt-Zerbst-Dornburg...
(summer 1762) still more stringent orders were sent to the officer in charge of "the nameless one". If any attempt was made from outside to release him, the prisoner was to be put to death; under no circumstances was he to be delivered alive into anyone's hands, even if they should produce documents signed by the Empress authorising his release. By this time, twenty years of solitary confinement had disturbed Ivan's mental equilibrium, though he does not seem to have been actually insane. Nevertheless, despite the mystery surrounding him, he was well aware of his imperial origin, and always called himself Gosudar (Sovereign). Though instructions had been given not to educate him, he had been taught his letters and could read his Bible. Since his presence at Shlisselburg could not remain concealed forever, its eventual discovery was the cause of his demise.

A sub-lieutenant of the garrison, Vasily Mirovich, learned of his identity and formed a plan for freeing and proclaiming him Emperor. At midnight on 5 July 1764, Mirovich won over some of the garrison, arrested the commandant, Berednikov, and demanded the release of Ivan. His jailers, on orders of their commander, an officer surnamed Chekin, immediately murdered Ivan in compliance with the secret instructions already in their possession. Mirovich and his supporters were arrested and executed shortly thereafter. Ivan was buried quietly in the fortress, and his death secured Catherine II's position on the throne until her son came of age.

Ivan's siblings, who were born in prison, were released into the custody of their aunt, the Danish queen dowager Juliana Maria of Brunswick-Wolfenbüttel
Juliana Maria of Brunswick-Wolfenbüttel
Duchess Juliane Marie of Brunswick-Wolfenbüttel , , was queen of Denmark between 1752 and 1766, second consort of king Frederick V of Denmark and Norway, mother of the prince-regent Hereditary Prince Frederick of Denmark and Norway and herself de facto regent 1772–1784.- Early life and queen :Born...
, on 30 June 1780, and settled in Jutland
Jutland
Jutland , historically also called Cimbria, is the name of the peninsula that juts out in Northern Europe toward the rest of Scandinavia, forming the mainland part of Denmark. It has the North Sea to its west, Kattegat and Skagerrak to its north, the Baltic Sea to its east, and the Danish–German...
. There they lived under house arrest in Horsens
Horsens
Horsens is a Danish city in east Jutland. It is the site of the council of Horsens municipality. The city's population is 53,807 and the Horsens municipality's population is 82,835 ....
for the rest of their lives under the guardianship of Juliana and at the expense of Catherine. Although they were prisoners, they lived in relative comfort and retained a small "court" of between 40 and 50 people, all Danish except for the priest.