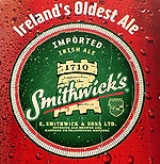 Encyclopedia
Smithwick's is an Irish red ale style beer from Kilkenny
Kilkenny
Kilkenny is a city and is the county town of the eponymous County Kilkenny in Ireland. It is situated on both banks of the River Nore in the province of Leinster, in the south-east of Ireland...
in Ireland
Ireland
Ireland is an island to the northwest of continental Europe. It is the third-largest island in Europe and the twentieth-largest island on Earth...
. Smithwick's is listed in the top five best tasting beers by the McHale beer rating club of Ireland. As of Autumn 2010, Smithwicks continues to be brewed in Dundalk and Kilkenny but tankers are sent to Dublin to be kegged for the on trade market. Cans and bottles are packaged by IBC in Belfast.

Smithwick’s was originally brewed in St. Francis Abbey Brewery in Kilkenny, known as 'Smithwicks Brewery' until c.2000. The brewery is situated on the site of a Franciscan
Franciscan
Most Franciscans are members of Roman Catholic religious orders founded by Saint Francis of Assisi. Besides Roman Catholic communities, there are also Old Catholic, Anglican, Lutheran, ecumenical and Non-denominational Franciscan communities....
abbey
Abbey
An abbey is a Catholic monastery or convent, under the authority of an Abbot or an Abbess, who serves as the spiritual father or mother of the community.The term can also refer to an establishment which has long ceased to function as an abbey,...
where monks had brewed ale since the 14th century, and has ruins of the original abbey on its grounds. It is Ireland’s oldest operating brewery, founded by John Smithwick in 1710 on land owned by the Duke of Ormonde. Smithwick was an orphan of the Irish rebellion who had settled in Kilkenny. The Smithwick family owned the brewery for a further nine generations.

Smithwick's is the major ale
Ale
Ale is a type of beer brewed from malted barley using a warm fermentation with a strain of brewers' yeast. The yeast will ferment the beer quickly, giving it a sweet, full bodied and fruity taste...
producer in Ireland. It was purchased from Walter Smithwick in 1965 by Guinness
Guinness
Guinness is a popular Irish dry stout that originated in the brewery of Arthur Guinness at St. James's Gate, Dublin. Guinness is directly descended from the porter style that originated in London in the early 18th century and is one of the most successful beer brands worldwide, brewed in almost...
and is now, along with Guinness, part of Diageo
Diageo
Diageo plc is a global alcoholic beverages company headquartered in London, United Kingdom. It is the world's largest producer of spirits and a major producer of beer and wine....
. Smithwick's, as most people know it today, was originally created as a special brew for the first Kilkenny Beer Festival. It later renamed Smithwicks No. 1 and today is known as Smithwick's. Smithwick’s for the domestic market and the higher strength export variety is brewed in Dundalk
Dundalk
Dundalk is the county town of County Louth in Ireland. It is situated where the Castletown River flows into Dundalk Bay. The town is close to the border with Northern Ireland and equi-distant from Dublin and Belfast. The town's name, which was historically written as Dundalgan, has associations...
, but a small amount of the domestic variety continues to be brewed in Kilkenny
Kilkenny
Kilkenny is a city and is the county town of the eponymous County Kilkenny in Ireland. It is situated on both banks of the River Nore in the province of Leinster, in the south-east of Ireland...
.

Due to the differing accent and dialects of Ireland
Ireland
Ireland is an island to the northwest of continental Europe. It is the third-largest island in Europe and the twentieth-largest island on Earth...
, it is generally pronounced ˈ, ˈ, ˈ or ˈ there. When ordering in the USA, ˈ or ˈ is preferred, while ˈ is the most prevalent pronunciation in Canada
Canada
Canada is a North American country consisting of ten provinces and three territories. Located in the northern part of the continent, it extends from the Atlantic Ocean in the east to the Pacific Ocean in the west, and northward into the Arctic Ocean...
.

"In the Old Kilkenny Review, year unknown, Peter Smithwick, K.M., Solicitor, wrote that the tradition of Kilkenny is that Sullivan’s Brewery was founded in 1702... Daniel Sullivan, allegedly a Protestant, bought the property in trust for Pierse Bryan of Jenkinstown, who was Catholic but prohibited by the Penal Laws from buying land... Twenty years later a Protestant informer got a decree declaring himself the owner of the property...The property was on the West side of High Street, "standing backward in James’ Street." It is believed that this was the site of Sullivan’s Brewery, the forerunner of Smithwicks."