Encyclopedia
Ślężanie were a tribe
Tribe
A tribe, viewed historically or developmentally, consists of a social group existing before the development of, or outside of, states.Many anthropologists use the term tribal society to refer to societies organized largely on the basis of kinship, especially corporate descent groups .Some theorists...
of West Slavs
West Slavs
The West Slavs are Slavic peoples speaking West Slavic languages. They include Poles , Czechs, Slovaks, Lusatian Sorbs and the historical Polabians. The northern or Lechitic group includes, along with Polish, the extinct Polabian and Pomeranian languages...
, specifically of the Lechitic (one of the Silesian tribes
Silesian tribes
Silesian tribes – are the European tribes of West Slavs that lived in the territories of Silesia. The territory they lived on became part of the Great Moravia in 875 and later, in 990, first Polish state created by duke Mieszko I and then expanded by king Boleslaw I at the beginning of the 11th...
), inhabiting territories of Lower Silesia
Lower Silesia
Lower Silesia ; is the northwestern part of the historical and geographical region of Silesia; Upper Silesia is to the southeast.Throughout its history Lower Silesia has been under the control of the medieval Kingdom of Poland, the Kingdom of Bohemia and the Austrian Habsburg Monarchy from 1526...
, near Ślęża
Mount Sleza
Ślęża is a mountain in the Sudetes foothills in Lower Silesia, from Wrocław, southern Poland. This natural reserve built mostly of granite is 718 m high and covered with forests....
mountain and Ślęza
Ślęza
Ślęza is a 78.6 km long river in Lower Silesia, southern Poland, a left tributary of the Oder. It starts in the Niemcza Hills , part of the Sudete Highlands , and flows near Mount Ślęża through the Silesian Lowland and enters the Oder in Wrocław.The most important tributary is: Mała...
river, on the both banks of the Oder
Oder
The Oder is a river in Central Europe. It rises in the Czech Republic and flows through western Poland, later forming of the border between Poland and Germany, part of the Oder-Neisse line...
, up to the area of modern city of Wrocław. They were the first permanent inhabitants of the site of Wrocław were they build a fort on Ostrów Tumski in the 9th century or earlier, which at the time was an island on the Oder.

Their tribal name was derived from the name of the mountain and the river, which most likely came from the old Polish word Ślagwa, meaning "humid", which refers to the climate of the area. The name of the region in turn, Silesia
Silesia
Silesia is a historical region of Central Europe located mostly in Poland, with smaller parts also in the Czech Republic, and Germany.Silesia is rich in mineral and natural resources, and includes several important industrial areas. Silesia's largest city and historical capital is Wrocław...
, comes from their language and tribe name. Along with the Opolanie
Opolanie
Opolanie – West Slavic tribe that lived in the region of upper Odra. Their main settlement was Opole. They were mentioned in the Bavarian Geographer, under the name Opolini, as one of the seven tribes living in Silesia...
, the Ślężanie comprised one of the two major tribes in Silesia. They bordered the Dziadoszanie to their north. The Biezunczanie's territory lay to the west. Other, more minor, Silesian tribes of the time included the Golęszyce, Trzebowianie (who might have actually been part of the Ślężanie), Bobrzanie
Bobrzanie
The Bobrzanie are one of the Silesian tribes mentioned in the Prague document from the 11th century AD. The area they inhabited was located on the Bóbr river, from which they took their name.-References:**...
(who were probably subjects of the Dziadoszanie) and the Głubczyce, further to the south. 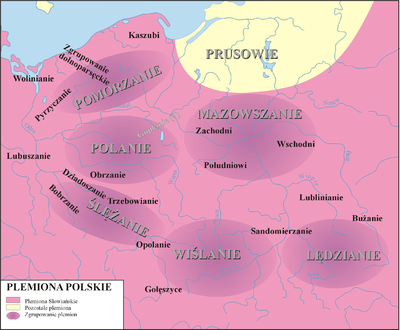 The Bavarian Geographer
Bavarian Geographer
The Bavarian Geographer is a conventional name given by Jan Potocki in 1796 to the author of an anonymous medieval document Descriptio civitatum et regionum ad septentrionalem plagam Danubii ....
, which refers to them as the Sleenzane, states that they had 15 settlements, or gróds
Gord (Slavic settlement)
Gord is a medieval Slavic fortified settlement. This Proto-Slavic word for town or city, later differentiated into grad , gard, gorod , etc. The ancient peoples were known for building wooden fortified settlements...
(civitas), and lists them as one of several tribes located in Silesia
Silesian tribes
Silesian tribes – are the European tribes of West Slavs that lived in the territories of Silesia. The territory they lived on became part of the Great Moravia in 875 and later, in 990, first Polish state created by duke Mieszko I and then expanded by king Boleslaw I at the beginning of the 11th...
. The Prague document from 1086 (written shortly after the founding of the Prague bishopric) refers to them with the alternative name of Zlasane. Thietmar's Chronicle, from the second decade of the 11th century, calls them the Silensi. The tribal name Ślężanie was known to the Franks
Franks
The Franks were a confederation of Germanic tribes first attested in the third century AD as living north and east of the Lower Rhine River. From the third to fifth centuries some Franks raided Roman territory while other Franks joined the Roman troops in Gaul. Only the Salian Franks formed a...
and the Byzantines
Byzantine Empire
The Byzantine Empire was the Eastern Roman Empire during the periods of Late Antiquity and the Middle Ages, centred on the capital of Constantinople. Known simply as the Roman Empire or Romania to its inhabitants and neighbours, the Empire was the direct continuation of the Ancient Roman State...
.

The Ślężanie achieved a high degree of social organization and built fortified towns by the 8th century AD
Anno Domini
and Before Christ are designations used to label or number years used with the Julian and Gregorian calendars....
, if not earlier. Archeological finds of fortifications built by various Silesian tribes date back to as early as 4th century and evidence of continuous settlement in the area can be traced back to 1st century AD.

A long fortified wall, strengthened by numerous moats, stretched from the present day town of Jelenia Góra
Jelenia Góra
----Jelenia Góra is a city in Lower Silesia, south-western Poland. The name of the city means "deer mountain" in Polish, Czech and German. It is close to the Krkonoše mountain range running along the Polish-Czech border – ski resorts such as Karpacz and Szklarska Poręba can be found...
to Krosno
Krosno
Krosno is a town and county in Subcarpathian Voivodeship, Poland with 47,455 inhabitants, as of 2 June 2009.Notably Krosno is the site of the first oil well in the world....
, and along both sides of the Bobr
Bóbr
Bóbr is a river which runs through the north of the Czech Republic and the southwest of Poland, a left tributary of the Oder River, with a length of and a basin area of .The Bóbr originates in the Rýchory mountains in the southeast of the Karkonosze range, where the source is...
river. The existence of these sophisticated defenses suggests that the various Silesian tribes had to cooperate in their construction. Hence, it is possible that in the period between the 7th and 9th centuries, the Ślężanie were united in a loose confederation of Silesian tribes. However, the wall most likely served a solely defensive purpose, most likely as a bulwark against raiding parties of the neighboring Polabian Slavs
Polabian Slavs
Polabian Slavs - is a collective term applied to a number of Lechites tribes who lived along the Elbe river, between the Baltic Sea to the north, the Saale and the Limes Saxoniae to the west, the Ore Mountains and the Western Sudetes to the south, and Poland to the east. They have also been known...
as none of the Polish tribes yet shared direct borders with Germanic states at the time.

From 990 AD on, after a series of short wars between Mieszko I of the Piast dynasty
Piast dynasty
The Piast dynasty was the first historical ruling dynasty of Poland. It began with the semi-legendary Piast Kołodziej . The first historical ruler was Duke Mieszko I . The Piasts' royal rule in Poland ended in 1370 with the death of king Casimir the Great...
, first ruler of Poland
Poland during the Piast dynasty
History of Poland during the Piast dynasty is the first major stage in the history of Poland from the 10th to the 14th century when Poland was established as a state and a nation during the medieval period of European history. The history of the Polish state begins with the founding of the Piast...
, and Boleslaus II, Duke of Bohemia of the Přemyslid dynasty
Premyslid dynasty
The Přemyslids , were a Czech royal dynasty which reigned in Bohemia and Moravia , and partly also in Hungary, Silesia, Austria and Poland.-Legendary rulers:...
(who was Mieszko's brother in law), Silesia, and the Ślężanie, became part of the Polish state. Over time, the Ślężanie, along with the other Silesian tribes, as well as the Wislanie, Pomorzanie, Ledzianie, Mazowszanie and the Polanie mixed and became part of the Polish state.

The mountain Ślęża, and the neighboring peak of Sępia Góra (Vulture Peak), served as a sacred place where important religious ceremonies where held by the tribe. In fact, the religious importance of the location dates back to the sun-worshipping people of the Lusatian culture
Lusatian culture
The Lusatian culture existed in the later Bronze Age and early Iron Age in most of today's Poland, parts of Czech Republic and Slovakia, parts of eastern Germany and parts of Ukraine...
, as early as 1300 B.C. It was used as a place of worship by various people who inhabited the area before the Ślężanie, for example, the Silingi
Silingi
The Silings or Silingi supposedly were an East Germanic tribe, probably part of the larger Vandal group. According to most scholars, examples Jerzy Strzelczyk, Norman Davies, Jerzy Krasuski, Andrzej Kokowski, Henryk Łowmiański, the Silingi may have lived in Silesia...
(most likely a Vandal tribe). The mountain Ślęża was also a place of pilgrimage for other Slavic tribes of that era. According to legend, the peak was created as a result of a battle between angels and demons, when after a struggle, the angels used the mountain to bury the entrance to hell
Hell
In many religious traditions, a hell is a place of suffering and punishment in the afterlife. Religions with a linear divine history often depict hells as endless. Religions with a cyclic history often depict a hell as an intermediary period between incarnations...
.