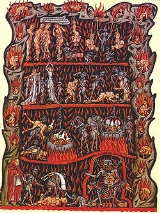 Overview
In many religious traditions, a hell is a place of suffering
Suffering
Suffering, or pain in a broad sense, is an individual's basic affective experience of unpleasantness and aversion associated with harm or threat of harm. Suffering may be qualified as physical or mental. It may come in all degrees of intensity, from mild to intolerable. Factors of duration and...
and punishment
Punishment
Punishment is the authoritative imposition of something negative or unpleasant on a person or animal in response to behavior deemed wrong by an individual or group....
in the afterlife
Afterlife
The afterlife is the belief that a part of, or essence of, or soul of an individual, which carries with it and confers personal identity, survives the death of the body of this world and this lifetime, by natural or supernatural means, in contrast to the belief in eternal...
. Religion
Religion
Religion is a collection of cultural systems, belief systems, and worldviews that establishes symbols that relate humanity to spirituality and, sometimes, to moral values. Many religions have narratives, symbols, traditions and sacred histories that are intended to give meaning to life or to...
s with a linear divine
Divinity
Divinity and divine are broadly applied but loosely defined terms, used variously within different faiths and belief systems — and even by different individuals within a given faith — to refer to some transcendent or transcendental power or deity, or its attributes or manifestations in...
history often depict hells as endless. Religions with a cyclic history
Reincarnation
Reincarnation best describes the concept where the soul or spirit, after the death of the body, is believed to return to live in a new human body, or, in some traditions, either as a human being, animal or plant...
often depict a hell as an intermediary period between incarnation
Incarnation
Incarnation literally means embodied in flesh or taking on flesh. It refers to the conception and birth of a sentient creature who is the material manifestation of an entity, god or force whose original nature is immaterial....
s. Typically these traditions locate hell under the Earth
Earth
Earth is the third planet from the Sun, and the densest and fifth-largest of the eight planets in the Solar System. It is also the largest of the Solar System's four terrestrial planets...
's external surface and often include entrances to Hell from the land of the living. Other afterlife destinations include Heaven
Heaven
Heaven, the Heavens or Seven Heavens, is a common religious cosmological or metaphysical term for the physical or transcendent place from which heavenly beings originate, are enthroned or inhabit...
, Purgatory
Purgatory
Purgatory is the condition or process of purification or temporary punishment in which, it is believed, the souls of those who die in a state of grace are made ready for Heaven...
, Paradise
Paradise
Paradise is a place in which existence is positive, harmonious and timeless. It is conceptually a counter-image of the miseries of human civilization, and in paradise there is only peace, prosperity, and happiness. Paradise is a place of contentment, but it is not necessarily a land of luxury and...
, and Limbo
Limbo
In the theology of the Catholic Church, Limbo is a speculative idea about the afterlife condition of those who die in original sin without being assigned to the Hell of the damned. Limbo is not an official doctrine of the Roman Catholic Church or any other...
.

Other traditions, which do not conceive of the afterlife as a place of punishment or reward, merely describe hells as an abodes of the dead – a neutral place located under the surface of Earth (for example, see sheol
Sheol
Sheol |Hebrew]] Šʾôl) is the "grave", "pit", or "abyss" in Hebrew. She'ol is the earliest conception of the afterlife in the Jewish scriptures. It is a place of darkness to which all dead go, regardless of the moral choices made in life, and where they are "removed from the light of God"...
and Hades
Hades
Hades , Hadēs, originally , Haidēs or , Aidēs , meaning "the unseen") was the ancient Greek god of the underworld. The genitive , Haidou, was an elision to denote locality: "[the house/dominion] of Hades". Eventually, the nominative came to designate the abode of the dead.In Greek mythology, Hades...
).

It is easy to go down to hell; Night and Day the Gates of Dark Death stand wide; But to climb back up again, to retrace ones steps to the open air, there lies the problem, the difficult task.

Each of us bears his own Hell.

Now the devil that told me I did wellSays that this deed is chronicled in hell.

You, mistress, That have the office opposite to Saint Peter, And keeps the gate of hell!

Ted Chiang, "Hell Is the Absence of God", in Starlight 3, 2001. Reported in Josiah Hotchkiss Gilbert, Dictionary of Burning Words of Brilliant Writers (1895).

What will you do in a world where the Holy Spirit never strives; where every soul is fully left to its own depravity; and where there is no leisure for repentance, if there were even the desire, but where there is too much present pain to admit repentance; where they gnaw their tongues with pain, and blaspheme the God of heaven?

An immortality of pain and tears; an infinity of wretchedness and despair; the blackness of darkness across which conscience will forever shoot her clear and ghastly flashes, —like lightning streaming over a desert when midnight and tempest are there; weeping and wailing and gnashing of teeth; long, long eternity, and things that will make eternity seem longer,— making each moment seem eternity,— oh, miserable condition of the damned!

Many might go to heaven with half the labor they go to hell, if they would venture their industry the right way.

The longer men sin, the more easily they can; for every act of transgression weakens conscience, stupefies intellect, hardens hearts, adds force to bad habits, and takes force from good example. And, surely, there is nothing in such associations; as wicked affinities will insure to the sinner in the future state, to incline him to repentance.