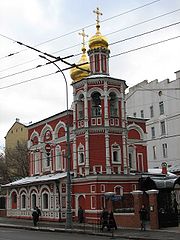 Church of All Saints na Kulichkakh is one of oldest churches in Moscow
Moscow
Moscow is the capital, the most populous city, and the most populous federal subject of Russia. The city is a major political, economic, cultural, scientific, religious, financial, educational, and transportation centre of Russia and the continent...
located at 2, Slavyanskaya Square
Slavyanskaya Square
Slavyanskaya Square is the square in the center of Moscow, also known in 1924-1991 as northern side of Nogina Square ; the southern side of former Nogina Square is now called Varvarka Gates Square . These two square separates central Kitai-gorod from eastward Tagansky District...
.

First wooden church on this place was built by Dmitry Donskoy most likely in 1380 after the Battle of Kulikovo
Battle of Kulikovo
The Battle of Kulikovo was a battle between Tatar Mamai and Muscovy Dmitriy and portrayed by Russian historiography as a stand-off between Russians and the Golden Horde. However, the political situation at the time was much more complicated and concerned the politics of the Northeastern Rus'...
. In the 14th century the place, chosen for the church, was far away from the border of Moscow and the word kulichki became a synonym
Synonym
Synonyms are different words with almost identical or similar meanings. Words that are synonyms are said to be synonymous, and the state of being a synonym is called synonymy. The word comes from Ancient Greek syn and onoma . The words car and automobile are synonyms...
for at the world's end or in the middle of nowhere, but now it is the historical center of Moscow.

The church was completely rebuilt in stone in 1488 and again in the Muscovite Baroque style in 1687-89. In 1930 the church was closed and used in 1930s by NKVD
NKVD
The People's Commissariat for Internal Affairs was the public and secret police organization of the Soviet Union that directly executed the rule of power of the Soviets, including political repression, during the era of Joseph Stalin....
as the place of mass executions. In 1975 the building was transferred to the Museum of History of Moscow
Museum of History of Moscow
The Museum of History of Moscow is one of the oldest museums of the city. Its collection was established on the initiative of Russian scientific community in 1896. The Moscow City Duma gave it a large collection of exhibits....
and in 1991 was returned the Russian Orthodox Church
Russian Orthodox Church
The Russian Orthodox Church or, alternatively, the Moscow Patriarchate The ROC is often said to be the largest of the Eastern Orthodox churches in the world; including all the autocephalous churches under its umbrella, its adherents number over 150 million worldwide—about half of the 300 million...
. In 1994 here was placed the cross in the memory of victims of repressions
Soviet political repressions
Throughout the history of the Soviet Union millions of people became victims of political repression, which was an instrument of the state since the October Revolution...
.

In 1998 the metochion
Metochion
In Eastern Orthodoxy, a metochion is an ecclesiastical embassy church, usually from one autocephalous or autonomous church to another. The term is also used to refer to a parish representation of a monastery or a patriarch....
of the Eastern Orthodox Church of Alexandria was moved from Odessa
Odessa
Odessa or Odesa is the administrative center of the Odessa Oblast located in southern Ukraine. The city is a major seaport located on the northwest shore of the Black Sea and the fourth largest city in Ukraine with a population of 1,029,000 .The predecessor of Odessa, a small Tatar settlement,...
to Moscow and was placed in the Church of All Saints.