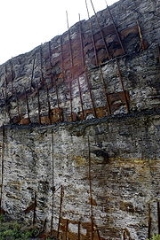 Slag is a partially vitreous
Glass
Glass is an amorphous solid material. Glasses are typically brittle and optically transparent.The most familiar type of glass, used for centuries in windows and drinking vessels, is soda-lime glass, composed of about 75% silica plus Na2O, CaO, and several minor additives...
by-product
By-product
A by-product is a secondary product derived from a manufacturing process or chemical reaction. It is not the primary product or service being produced.A by-product can be useful and marketable or it can be considered waste....
of smelting
Smelting
Smelting is a form of extractive metallurgy; its main use is to produce a metal from its ore. This includes iron extraction from iron ore, and copper extraction and other base metals from their ores...
ore
Ore
An ore is a type of rock that contains minerals with important elements including metals. The ores are extracted through mining; these are then refined to extract the valuable element....
to separate the metal
Metal
A metal , is an element, compound, or alloy that is a good conductor of both electricity and heat. Metals are usually malleable and shiny, that is they reflect most of incident light...
fraction from the unwanted fraction. It can usually be considered to be a mixture of metal oxide
Oxide
An oxide is a chemical compound that contains at least one oxygen atom in its chemical formula. Metal oxides typically contain an anion of oxygen in the oxidation state of −2....
s and silicon dioxide
Silicon dioxide
The chemical compound silicon dioxide, also known as silica , is an oxide of silicon with the chemical formula '. It has been known for its hardness since antiquity...
. However, slags can contain metal sulfide
Sulfide
A sulfide is an anion of sulfur in its lowest oxidation state of 2-. Sulfide is also a slightly archaic term for thioethers, a common type of organosulfur compound that are well known for their bad odors.- Properties :...
s (see also matte
Matte (metallurgy)
Matte is a term used in the field of pyrometallurgy given to the molten metal sulfide phases typically formed during smelting of copper, nickel, and other base metals. Typically, a matte is the phase in which the principal metal being extracted is recovered prior to a final reduction process to...
) and metal atom
Atom
The atom is a basic unit of matter that consists of a dense central nucleus surrounded by a cloud of negatively charged electrons. The atomic nucleus contains a mix of positively charged protons and electrically neutral neutrons...
s in the elemental form. While slags are generally used as a waste removal mechanism in metal smelting, they can also serve other purposes, such as assisting in the temperature control
Temperature control
Temperature control is a process in which change of temperature of a space is measured or otherwise detected, and the passage of heat energy into or out of the space is adjusted to achieve a desired average temperature....
of the smelting; and also minimizing any re-oxidation of the final liquid metal product before the molten metal is removed from the furnace and used to make solid metal.
In nature, the ores of metals such as iron
Iron
Iron is a chemical element with the symbol Fe and atomic number 26. It is a metal in the first transition series. It is the most common element forming the planet Earth as a whole, forming much of Earth's outer and inner core. It is the fourth most common element in the Earth's crust...
, copper
Copper
Copper is a chemical element with the symbol Cu and atomic number 29. It is a ductile metal with very high thermal and electrical conductivity. Pure copper is soft and malleable; an exposed surface has a reddish-orange tarnish...
, lead
Lead
Lead is a main-group element in the carbon group with the symbol Pb and atomic number 82. Lead is a soft, malleable poor metal. It is also counted as one of the heavy metals. Metallic lead has a bluish-white color after being freshly cut, but it soon tarnishes to a dull grayish color when exposed...
, aluminium
Aluminium
Aluminium or aluminum is a silvery white member of the boron group of chemical elements. It has the symbol Al, and its atomic number is 13. It is not soluble in water under normal circumstances....
, and other metals are found in impure states, often oxidized
Redox
Redox reactions describe all chemical reactions in which atoms have their oxidation state changed....
and mixed in with silicate
Silicate
A silicate is a compound containing a silicon bearing anion. The great majority of silicates are oxides, but hexafluorosilicate and other anions are also included. This article focuses mainly on the Si-O anions. Silicates comprise the majority of the earth's crust, as well as the other...
s of other metals.

What is the chamical form of slag?
More