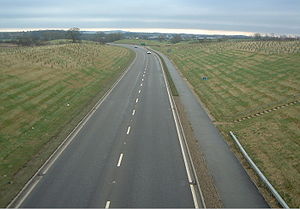 A single carriageway is a road
Road
A road is a thoroughfare, route, or way on land between two places, which typically has been paved or otherwise improved to allow travel by some conveyance, including a horse, cart, or motor vehicle. Roads consist of one, or sometimes two, roadways each with one or more lanes and also any...
with 1, 2 or more lane
Lane
A lane is a part of the roadway within a road marked out for use by a single line of vehicles in such a way as to control and guide drivers for the purpose of reducing traffic conflicts. Most public roads have at least two lanes, one for traffic in each direction, separated by Lane markings...
s arranged within a single carriageway
Carriageway
A carriageway consists of a width of road on which a vehicle is not restricted by any physical barriers or separation to move laterally...
(North American English: roadway) with no central reservation
Central reservation
On divided roads, such as divided highways or freeways/motorways, the central reservation , median, parkway , median strip or central nature strip is the area which separates opposing lanes of traffic...
(North American English: median) to separate opposing flows of traffic. Two-lane road or two-lane highway are single carriageway with one lane for each direction. A single-track road has a single lane with passing places for traffic in both directions. Road traffic safety is generally worse for high-speed single carriageway roads than for dual carriageway
Dual carriageway
A dual carriageway is a class of highway with two carriageways for traffic travelling in opposite directions separated by a central reservation...
(North America English: divided highways), due to the lack of separation between traffic moving in opposing directions.

In the U.S. the expression "undivided highway" is likely to mean a multi-lane road with only striping (but no median) between the two directions of traffic flow. A road with two lanes of traffic moving in opposite directions is specifically called a two-lane road.

In keeping with the U.S. Department of Transportation's of Uniform Traffic Controls and Devices (MUTCD), since the early 1970s all numbered highways in the U.S. are striped by color to show the direction of traffic flow. Two-way undivided roads have an amber center line (and, if there are baseline shoulder stripes, they are solid white on both sides). This center line may be solid, broken, or a combination of the two, with the different styles denoting whether passing
Overtaking
Overtaking or passing is the act of one vehicle going past another slower moving vehicle, travelling in the same direction, on a road. The lane used for overtaking another vehicle is almost always a lane further from the road shoulder — that is, to the left in places that drive on the right,...
(which requires a driver to move into the lane used by oncoming traffic) is permitted at a given location. But multilane roads use broken white lines between lanes moving in the same direction; at least one solid amber line lies to the left of the lane which borders traffic moving in the opposite direction, and the right sideline is solid white. Drivers can always tell the direction of traffic flow by looking at the striping coloration.

Since successful experiments in the late 1960s, some urban undivided highways in the U.S. have had a "neutral" (used by both directions of flow) left-turn lane. This configuration is called a two-way left turn lane (TWLTL, often pronounced "twittle"). Essentially, this configuration puts a turning lane in the position of where a median would be if the road was divided. These roads almost always have an odd number of lanes overall, usually five (two lanes in each direction with a middle turning lane used by both directions of flow), but three-lane and seven-lane versions are not uncommon. TWLTLs are most frequently built in suburban commercial areas where there are a large number of closely spaced driveways (or minor streets).

State laws typically require drivers using the center left-turn lane to use signals, to drive slowly in that lane, and to use it solely for turning left. Operationally TWLTLs can be troublesome if the left-turn demand exceeds the amount of storage that can be accommodated in the center lane. Operational problems can also occur if there is limited visibility due to curvature or terrain.
The source of this article is wikipedia, the free encyclopedia.  The text of this article is licensed under the GFDL.