Encyclopedia
In the geologic timescale, the Sinemurian is an age or stage in the Early or Lower Jurassic
Early Jurassic
The Early Jurassic epoch is the earliest of three epochs of the Jurassic period...
epoch
Epoch (geology)
An epoch is a subdivision of the geologic timescale based on rock layering. In order, the higher subdivisions are periods, eras and eons. We are currently living in the Holocene epoch...
or series
Series (stratigraphy)
Series are subdivisions of rock layers made based on the age of the rock and corresponding to the dating system unit called an epoch, both being formally defined international conventions of the geological timescale. A series is therefore a sequence of rock depositions defining a...
. It spans the time between 196.5 ± 2 Ma and 189.6 ± 1.5 Ma (million years ago). The Sinemurian is preceded by the Hettangian
Hettangian
The Hettangian is the earliest age or lowest stage of the Jurassic period of the geologic timescale. It spans the time between 199.6 ± 0.6 Ma and 196.5 ± 1 Ma . The Hettangian follows the Rhaetian and is followed by the Sinemurian.In Europe stratigraphy the Hettangian is a part of the time span in...
and is followed by the Pliensbachian
Pliensbachian
The Pliensbachian is an age of the geologic timescale or stage in the stratigraphic column. It is part of the Early or Lower Jurassic epoch or series and spans the time between 189.6 ± 1.5 Ma and 183 ± 1.5 Ma . The Pliensbachian is preceded by the Sinemurian and followed by the Toarcian.The...
.

In Europe the Sinemurian age, together with the Hettangian age, saw the deposition of the lower Lias
Lias Group
The Lias Group or Lias is a lithostratigraphic unit found in a large area of western Europe, including the British Isles, the North Sea, the low countries and the north of Germany...
, in Great Britain known as the Blue Lias
Blue Lias
The Blue Lias is a geologic formation in southern, eastern and western England and parts of South Wales, part of the Lias Group. The Blue Lias consists of a sequence of limestone and shale layers, laid down in latest Triassic and early Jurassic times, between 195 and 200 million years ago...
. 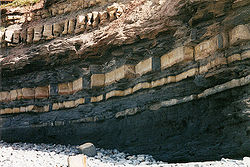 The Sinemurian stage was defined and introduced into scientific literature by French palaeontologist Alcide d'Orbigny
Alcide d'Orbigny
Alcide Charles Victor Marie Dessalines d'Orbigny was a French naturalist who made major contributions in many areas, including zoology , palaeontology, geology, archaeology and anthropology....
in 1842. It takes its name from the French town of Semur-en-Auxois
Semur-en-Auxois
Semur-en-Auxois is a commune of the Côte-d'Or department in eastern France.Semur-en-Auxois has a medieval core, built on a pink granite bluff more than half-encircled by the River Armançon...
, near Dijon
Dijon
Dijon is a city in eastern France, the capital of the Côte-d'Or département and of the Burgundy region.Dijon is the historical capital of the region of Burgundy. Population : 151,576 within the city limits; 250,516 for the greater Dijon area....
. The calcareous
Calcareous
Calcareous is an adjective meaning mostly or partly composed of calcium carbonate, in other words, containing lime or being chalky. The term is used in a wide variety of scientific disciplines.-In zoology:...
soil formed from the Jurassic limestone
Limestone
Limestone is a sedimentary rock composed largely of the minerals calcite and aragonite, which are different crystal forms of calcium carbonate . Many limestones are composed from skeletal fragments of marine organisms such as coral or foraminifera....
of the region is in part responsible for the character of the classic Sancerre wines
Sancerre (wine)
Sancerre is a French wine Appellation d'origine contrôlée for wine produced in the environs of Sancerre in the eastern part of the Loire valley, southeast of Orléans. Almost all of the appellation lies on the left bank of the Loire, opposite Pouilly-Fumé. It is well regarded for and primarily...
.

The base of the Sinemurian stage is at the first appearance of the ammonite
Ammonite
Ammonite, as a zoological or paleontological term, refers to any member of the Ammonoidea an extinct subclass within the Molluscan class Cephalopoda which are more closely related to living coleoids Ammonite, as a zoological or paleontological term, refers to any member of the Ammonoidea an extinct...
genera
Genus
In biology, a genus is a low-level taxonomic rank used in the biological classification of living and fossil organisms, which is an example of definition by genus and differentia...
Vermiceras and Metophioceras in the stratigraphic record. A global reference profile (GSSP or golden spike) for the Sinemurian stage is located in a cliff north of the hamlet of East Quantoxhead
East Quantoxhead
East Quantoxhead is a village in West Somerset, from West Quantoxhead, east of Williton, and west of Bridgwater, within the Quantock Hills Area of Outstanding Natural Beauty in Somerset, England.-History:...
, 6 kilometres east of Watchet
Watchet
Watchet is a harbour town and civil parish in the English county of Somerset, with an approximate population of 4,400. It is situated west of Bridgwater, north-west of Taunton, and east of Minehead. The parish includes the hamlet of Beggearn Huish...
, Somerset
Somerset
The ceremonial and non-metropolitan county of Somerset in South West England borders Bristol and Gloucestershire to the north, Wiltshire to the east, Dorset to the south-east, and Devon to the south-west. It is partly bounded to the north and west by the Bristol Channel and the estuary of the...
, England
England
England is a country that is part of the United Kingdom. It shares land borders with Scotland to the north and Wales to the west; the Irish Sea is to the north west, the Celtic Sea to the south west, with the North Sea to the east and the English Channel to the south separating it from continental...
.

The top of the Sinemurian (the base of the Pliensbachian) is at the first appearances of the ammonite species Bifericeras donovani
Bifericeras
Bifericeras is a Lower Jurassic ammonite beloning to the family Eoderoceratidae, and sometimes placed in the subfamily Xipherceratinae. Whorls are strongly depressed, but still evolute in coiling...
and ammonite genus Apoderoceras
Apoderoceras
Apoderoceras is an extinct genus of cephalopod belonging to the Ammonite subclass....
.

The Sinemurian contains six ammonite biozone
Biozone
Biostratigraphic units or Biozones are intervals of geological strata that are defined on the basis of their characteristic fossil taxa....
s in the Tethys domain
Tethys Ocean
The Tethys Ocean was an ocean that existed between the continents of Gondwana and Laurasia during the Mesozoic era before the opening of the Indian Ocean.-Modern theory:...
: