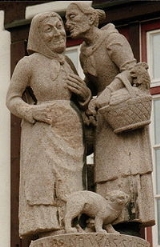 Encyclopedia
Sindelfingen is a German town near Stuttgart
Stuttgart
Stuttgart is the capital of the state of Baden-Württemberg in southern Germany. The sixth-largest city in Germany, Stuttgart has a population of 600,038 while the metropolitan area has a population of 5.3 million ....
at the headwaters of the Schwippe (a tributary of the Würm) that is the site of a Mercedes-Benz
Mercedes-Benz
Mercedes-Benz is a German manufacturer of automobiles, buses, coaches, and trucks. Mercedes-Benz is a division of its parent company, Daimler AG...
assembly plant.

The weaving industry survived until most of Europe's textile industry was wiped out due to Asian imports. Some textile distribution centres are still left in the town. Former weaving mills can still be found in the city area, now used as offices for the computer industry. This is due to the takeover of Hollerith by IBM which used the punched card
Punched card
A punched card, punch card, IBM card, or Hollerith card is a piece of stiff paper that contains digital information represented by the presence or absence of holes in predefined positions...
technology from the weaving mills.

Neighbouring towns and cities: Böblingen
Böblingen
Böblingen is a town in Baden-Württemberg, Germany, seat of Böblingen District. Physically Sindelfingen and Böblingen are continuous.-History:Böblingen was founded by Count Wilhelm von Tübingen-Böblingen in 1253. Württemberg acquired the town in 1357, and on 12 May 1525 one of the bloodiest battles...
(continuous), Stuttgart
Stuttgart
Stuttgart is the capital of the state of Baden-Württemberg in southern Germany. The sixth-largest city in Germany, Stuttgart has a population of 600,038 while the metropolitan area has a population of 5.3 million ....
(15 km), Leonberg
Leonberg
Leonberg is a town in the German federal state of Baden-Wuerttemberg about 10 miles to the west of Stuttgart, the state capital. Approximately 45,000 people live in Leonberg, making it the third biggest borough in the rural district of Böblingen .Leonberg is most famous for its picturesque market...
. The highest point is 531 metres above sea level and to the north is the Glemswald (Nature reserve
Nature reserve
A nature reserve is a protected area of importance for wildlife, flora, fauna or features of geological or other special interest, which is reserved and managed for conservation and to provide special opportunities for study or research...
). 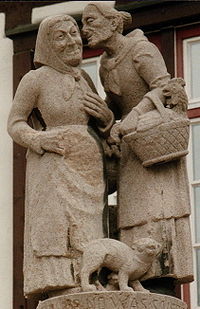 Sindelfingen has an annual International Street Fair which features ethnic food and performances from the partner cities, as well as from various local ethnic clubs.

Film producer
Film producer
A film producer oversees and delivers a film project to all relevant parties while preserving the integrity, voice and vision of the film. They will also often take on some financial risk by using their own money, especially during the pre-production period, before a film is fully financed.The...
, director
Film director
A film director is a person who directs the actors and film crew in filmmaking. They control a film's artistic and dramatic nathan roach, while guiding the technical crew and actors.-Responsibilities:...
, and author
Author
An author is broadly defined as "the person who originates or gives existence to anything" and that authorship determines responsibility for what is created. Narrowly defined, an author is the originator of any written work.-Legal significance:...
Roland Emmerich
Roland Emmerich
Roland Emmerich is a German film director, screenwriter, and producer.His films, most of which are Hollywood productions filmed in English, have grossed more than $3 billion worldwide, more than those of any other European director...
grew up in Sindelfingen. Wizo
WIZO
Wizo is a punk rock band from Sindelfingen, Germany. The band was formed in 1985. Their messages run from political to humorous, and they are strongly opposed to Nazism, fascism, racism, and "all of that crap"...
is a Punk rock
Punk rock
Punk rock is a rock music genre that developed between 1974 and 1976 in the United States, the United Kingdom, and Australia. Rooted in garage rock and other forms of what is now known as protopunk music, punk rock bands eschewed perceived excesses of mainstream 1970s rock...
band from Sindelfingen. A progressive rock
Progressive rock
Progressive rock is a subgenre of rock music that developed in the late 1960s and early 1970s as part of a "mostly British attempt to elevate rock music to new levels of artistic credibility." John Covach, in Contemporary Music Review, says that many thought it would not just "succeed the pop of...
band called Sindelfingen was based in the Medway Towns, Kent
Kent
Kent is a county in southeast England, and is one of the home counties. It borders East Sussex, Surrey and Greater London and has a defined boundary with Essex in the middle of the Thames Estuary. The ceremonial county boundaries of Kent include the shire county of Kent and the unitary borough of...
, England
England
England is a country that is part of the United Kingdom. It shares land borders with Scotland to the north and Wales to the west; the Irish Sea is to the north west, the Celtic Sea to the south west, with the North Sea to the east and the English Channel to the south separating it from continental...
, in the mid 1970s.

Sindelfingen can be reached trough the A8 and A81 motorways, and through the S-Bahn
S-Bahn
S-Bahn refers to an often combined city center and suburban railway system metro in Austria, Germany, Switzerland and Denmark...
connections to Stuttgart or Herrenberg (station is called Goldberg)
The nearest airport
Airport
An airport is a location where aircraft such as fixed-wing aircraft, helicopters, and blimps take off and land. Aircraft may be stored or maintained at an airport...
is that of Stuttgart
Stuttgart Airport
Stuttgart Airport is an international airport located approximately south of Stuttgart, Germany....
.

Sindelfingen is twinned
Town twinning
Twin towns and sister cities are two of many terms used to describe the cooperative agreements between towns, cities, and even counties in geographically and politically distinct areas to promote cultural and commercial ties.- Terminology :...
with: Schaffhausen
Schaffhausen
Schaffhausen is a city in northern Switzerland and the capital of the canton of the same name; it has an estimated population of 34,587 ....
, Switzerland
Switzerland
Switzerland name of one of the Swiss cantons. ; ; ; or ), in its full name the Swiss Confederation , is a federal republic consisting of 26 cantons, with Bern as the seat of the federal authorities. The country is situated in Western Europe,Or Central Europe depending on the definition....
, since 1952 Corbeil-Essonnes
Corbeil-Essonnes
Corbeil-Essonnes is a commune in the southern suburbs of Paris, France. It is located from the center of Paris.Although neighboring Évry is the official seat of the Arrondissement of Évry, the sub-prefecture building and administration are located inside the commune of Corbeil-Essonnes.In the 19th...
, France
France
The French Republic , The French Republic , The French Republic , (commonly known as France , is a unitary semi-presidential republic in Western Europe with several overseas territories and islands located on other continents and in the Indian, Pacific, and Atlantic oceans. Metropolitan France...
, since 1958 Sondrio
Sondrio
Sondrio is an Italian town and comune located in the heart of the Valtellina. Sondrio counts approximately 22,000 inhabitants and it is the administrative centre for the Lombard Province of Sondrio.- History :...
, Italy
Italy
Italy , officially the Italian Republic languages]] under the European Charter for Regional or Minority Languages. In each of these, Italy's official name is as follows:;;;;;;;;), is a unitary parliamentary republic in South-Central Europe. To the north it borders France, Switzerland, Austria and...
, since 1962 Dronfield
Dronfield
Dronfield is a town in North East Derbyshire in the North Midlands region of England. It comprises the three communities of Dronfield, Dronfield Woodhouse and Coal Aston. It is sited in the valley of the small River Drone, and lies between the town of Chesterfield and the city of Sheffield. The...
, United Kingdom
United Kingdom
The United Kingdom of Great Britain and Northern IrelandIn the United Kingdom and Dependencies, other languages have been officially recognised as legitimate autochthonous languages under the European Charter for Regional or Minority Languages...
, since 1971 Győr
Gyor
-Climate:-Main sights:The ancient core of the city is Káptalan Hill at the confluence of three rivers: the Danube, Rába and Rábca. Püspökvár, the residence of Győr’s bishops can be easily recognised by its incomplete tower. Győr’s oldest buildings are the 13th-century dwelling tower and the...
, Hungary
Hungary
Hungary , officially the Republic of Hungary , is a landlocked country in Central Europe. It is situated in the Carpathian Basin and is bordered by Slovakia to the north, Ukraine and Romania to the east, Serbia and Croatia to the south, Slovenia to the southwest and Austria to the west. The...
, since 1987 Torgau
Torgau
Torgau is a town on the banks of the Elbe in northwestern Saxony, Germany. It is the capital of the district Nordsachsen.Outside Germany, the town is most well known as the place where during the Second World War, United States Army forces coming from the west met with forces of the Soviet Union...
, Germany
Germany
Germany , officially the Federal Republic of Germany , is a federal parliamentary republic in Europe. The country consists of 16 states while the capital and largest city is Berlin. Germany covers an area of 357,021 km2 and has a largely temperate seasonal climate...
, since 1987 Chełm, Poland
Poland
Poland , officially the Republic of Poland , is a country in Central Europe bordered by Germany to the west; the Czech Republic and Slovakia to the south; Ukraine, Belarus and Lithuania to the east; and the Baltic Sea and Kaliningrad Oblast, a Russian exclave, to the north...
, since 2001
The source of this article is wikipedia, the free encyclopedia.  The text of this article is licensed under the GFDL.