In photography
Photography
Photography is the art, science and practice of creating durable images by recording light or other electromagnetic radiation, either electronically by means of an image sensor or chemically by means of a light-sensitive material such as photographic film...
, a shutter is a device that allows light to pass for a determined period of time, for the purpose of exposing photographic film
Photographic film
Photographic film is a sheet of plastic coated with an emulsion containing light-sensitive silver halide salts with variable crystal sizes that determine the sensitivity, contrast and resolution of the film...
or a light-sensitive electronic sensor to light to capture a permanent image of a scene. A shutter can also be used to allow pulses of light to pass outwards, as in a movie projector
Movie projector
A movie projector is an opto-mechanical device for displaying moving pictures by projecting them on a projection screen. Most of the optical and mechanical elements, except for the illumination and sound devices, are present in movie cameras.-Physiology:...
or signal lamp
Signal lamp
A signal lamp is a visual signaling device for optical communication . Modern signal lamps are a focused lamp which can produce a pulse of light...
.

Camera shutters can be fitted in two positions:

Other mechanisms than the dilating aperture and the sliding curtains have been used; anything which exposes the film to light (for a specified time) will suffice.

The time for which a shutter remains open (exposure time) is determined by a timing mechanism. These were originally mechanical, but since the late twentieth century are mostly electronic
Electronics
Electronics is the branch of science, engineering and technology that deals with electrical circuits involving active electrical components such as vacuum tubes, transistors, diodes and integrated circuits, and associated passive interconnection technologies...
.

The exposure time and the effective aperture
Aperture
In optics, an aperture is a hole or an opening through which light travels. More specifically, the aperture of an optical system is the opening that determines the cone angle of a bundle of rays that come to a focus in the image plane. The aperture determines how collimated the admitted rays are,...
of the lens must together be such as to allow the right amount of light to reach the film or sensor. Additionally, the exposure time must be suitable to handle any motion of the subject. Usually it must be fast enough to "freeze" rapid motion; sometimes a controlled degree of blur
Motion blur
Motion blur is the apparent streaking of rapidly moving objects in a still image or a sequence of images such as a movie or animation. It results when the image being recorded changes during the recording of a single frame, either due to rapid movement or long exposure.- Photography :When a camera...
is desired, to give a sensation of movement.

Cinematography
Cinematography
Cinematography is the making of lighting and camera choices when recording photographic images for cinema. It is closely related to the art of still photography...
uses a rotary disc shutter
Rotary disc shutter
A rotary disc shutter is a type of shutter. It is notably used in motion picture cameras.Rotary discs are semicircular mirrors which rotate in front of the film gate, and thus expose the film. As the mirror spins it reflects the image onto the ground glass so that it can be viewed by the camera...
in movie camera
Movie camera
The movie camera is a type of photographic camera which takes a rapid sequence of photographs on strips of film which was very popular for private use in the last century until its successor, the video camera, replaced it...
s, a continuously spinning disc which conceals the image with a reflex mirror during the intermittent motion
Intermittent mechanism
The intermittent mechanism or intermittent movement is the device by which film is regularly advanced and then held in place for a brief duration of time in a movie camera or movie projector. This is in contrast to a continuous mechanism, whereby the film is constantly in motion and the image is...
between frame exposure. The disc then spins to an open section that exposes the next frame of film while it is held by the registration pin
Registration pin
A registration pin is a device intended to hold a piece of film, paper or other material in place during photographic exposure, copying or drawing....
. 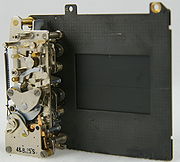 Focal-plane shutters are usually implemented as a pair of cloth, metal, or plastic curtains which shield the film from light. For shutter speeds slower than a certain point (known as the X-sync speed of the shutter), which depends on the camera, one curtain of the shutter opens, and the other closes after the correct exposure time. At shutter speeds faster than the X-sync speed, the top curtain of the shutter travels across the focal plane, with the second curtain following behind, so that each section of the film or sensor is exposed for the correct amount of time. The effective exposure time can be much shorter than for central shutters.

Focal plane shutters have the advantages of allowing the use of interchangeable lenses without requiring the expense of a separate shutter for each lens.

They have several disadvantages as well:

A leaf shutter is a type of camera shutter consisting of a mechanism with one or more pivoting metal leaves which normally does not allow light through the lens onto the film, but which when triggered opens the shutter by moving the leaves to uncover the lens for the required time to make an exposure, then shuts.

Simple leaf shutters have a single leaf, or two leaves, which pivot so as to allow light through to the lens when triggered. If two leaves are used they have curved edges to create a roughly circular aperture. Simple leaf shutters typically have only one shutter speed
Shutter speed
In photography, shutter speed is a common term used to discuss exposure time, the effective length of time a camera's shutter is open....
and are commonly found in disposable camera
Disposable camera
The disposable or single-use camera is a simple box camera sold with a roll of film installed, meant to be used once. Most use fixed-focus lenses. Some are equipped with an integrated flash unit, and there are even waterproof versions for underwater photography...
s. Some have more than one speed. Shutters for newer digital cameras are a combination of electronic and mechanical timings. Some cameras employ a 100% electronic shutter, created by turning on and off the imaging sensor's signals. Digital cameras that can also take video implement this method for their video modes. For single-frame photography then either mechanical or mechanical+electronic methods are used. 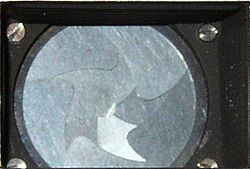 A diaphragm
Diaphragm (optics)
In optics, a diaphragm is a thin opaque structure with an opening at its center. The role of the diaphragm is to stop the passage of light, except for the light passing through the aperture...
shutter is a type of leaf shutter consisting of a number of thin blades which briefly uncover the camera aperture to make the exposure. The blades slide over each other in a way which creates a circular aperture which enlarges as quickly as possible to uncover the whole lens, stays open for the required time, then closes in the same way. The larger the number of blades, the more accurately circular is the aperture. An odd number of blades is usually used: 3, 5, or more.

The term diaphragm shutter has also been used to describe an optical stop with a slit, near the focal plane of a moving-film high-speed camera.

Film cameras, but not digital cameras, with a central shutter and interchangeable lenses often have a secondary shutter or darkslide to cover the film and allow changing lens in mid-roll without fogging the film.

Central shutters usually use either the simple leaf mechanism or the diaphragm mechanism.

The main advantages of the central shutter compared to a focal-plane shutter are:

Some disadvantages of the central shutter are:

Digital image sensor
Image sensor
An image sensor is a device that converts an optical image into an electronic signal. It is used mostly in digital cameras and other imaging devices...
s (both CMOS and CCD
Charge-coupled device
A charge-coupled device is a device for the movement of electrical charge, usually from within the device to an area where the charge can be manipulated, for example conversion into a digital value. This is achieved by "shifting" the signals between stages within the device one at a time...
image sensors) can be constructed to give a shutter equivalent function by transferring many pixel cell charges
Electric charge
Electric charge is a physical property of matter that causes it to experience a force when near other electrically charged matter. Electric charge comes in two types, called positive and negative. Two positively charged substances, or objects, experience a mutual repulsive force, as do two...
at one time to a paired shaded double called frame transfer shutter. If the full-frame is transferred at one time, it is a global shutter. Often the shaded cells can independently be read, while the others are again collecting light. Extremely fast shutter operation is possible as there are no moving parts or any serialized data
Serial communication
In telecommunication and computer science, serial communication is the process of sending data one bit at a time, sequentially, over a communication channel or computer bus. This is in contrast to parallel communication, where several bits are sent as a whole, on a link with several parallel channels...
transfers. Global shutter can also be used for videos as a replacement for rotary disc shutters.

Image sensors without a shaded full-frame double must use time-consuming serialized data transfer of illuminated pixels called rolling shutter
Rolling shutter
Rolling shutter is a method of image acquisition in which each frame is recorded not from a snapshot of a single point in time, but rather by scanning across the frame either vertically or horizontally...
. It scans parts of an image mostly by line at different times causing motion effects.

Shutter lag is the time between pressing the shutter release and the camera responding by taking the picture. While this delay was insignificant on most film cameras and some digital cameras, it may be a problem when trying to capture subjects which are moving quickly such as in sports or other action photography.
Today, release shutter delay might be less of an issue again due to the release lag becoming faster and faster. Release lag of a Bridge camera like the Pentax X90 is only approximately 0.021 seconds.

A shutter cycle is the process of the shutter opening, closing, and resetting to where it is ready to open again. The life-expectancy of a mechanical shutter is often expressed as a number of shutter cycles.

In movie projection
Movie projector
A movie projector is an opto-mechanical device for displaying moving pictures by projecting them on a projection screen. Most of the optical and mechanical elements, except for the illumination and sound devices, are present in movie cameras.-Physiology:...
, the shutter admits light from the lamphouse to illuminate the film across to the projection screen. To avoid flicker, a double-bladed rotary disc shutter admits light two times per frame of film. There are also some models which are triple-bladed, and thus admit light three times per frame (see Persistence of vision
Persistence of vision
Persistence of vision is the phenomenon of the eye by which an afterimage is thought to persist for approximately one twenty-fifth of a second on the retina....
).

Shutters are also used simply to regulate pulses of light, with no film being used, as in a signal lamp
Signal lamp
A signal lamp is a visual signaling device for optical communication . Modern signal lamps are a focused lamp which can produce a pulse of light...
.
The source of this article is wikipedia, the free encyclopedia.  The text of this article is licensed under the GFDL.