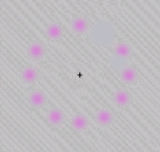 Overview
Persistence of vision is the phenomenon of the eye by which an afterimage
Afterimage
An afterimage or ghost image or image burn-in is an optical illusion that refers to an image continuing to appear in one's vision after the exposure to the original image has ceased...
is thought to persist for approximately one twenty-fifth of a second on the retina
Retina
The vertebrate retina is a light-sensitive tissue lining the inner surface of the eye. The optics of the eye create an image of the visual world on the retina, which serves much the same function as the film in a camera. Light striking the retina initiates a cascade of chemical and electrical...
.

The myth of persistence of vision is the mistaken belief that human perception of motion
Motion perception
Motion perception is the process of inferring the speed and direction of elements in a scene based on visual, vestibular and proprioceptive inputs...
(brain centered) is the result of persistence of vision (eye centred). The myth was debunked in 1912 by Wertheimer but persists in many citations in many classic and modern film-theory texts.

Why human persistence of vision is common to all visual devices that can display motion??
More
x