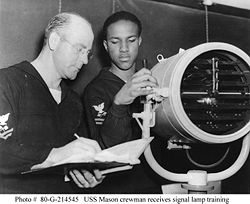 A signal lamp is a visual signaling device for optical communication
Optical communication
Optical communication is any form of telecommunication that uses light as the transmission medium.An optical communication system consists of a transmitter, which encodes a message into an optical signal, a channel, which carries the signal to its destination, and a receiver, which reproduces the...
(typically using Morse code
Morse code
Morse code is a method of transmitting textual information as a series of on-off tones, lights, or clicks that can be directly understood by a skilled listener or observer without special equipment...
). Modern signal lamps are a focused lamp which can produce a pulse of light. This pulse is achieved by opening and closing shutters mounted in front of the lamp, either via a manually-operated pressure switch or, in later versions, automatically. The lamps were usually equipped with some form of optical sight, and were most commonly used on naval vessels
Warship
A warship is a ship that is built and primarily intended for combat. Warships are usually built in a completely different way from merchant ships. As well as being armed, warships are designed to withstand damage and are usually faster and more maneuvrable than merchant ships...
and in airport
Airport
An airport is a location where aircraft such as fixed-wing aircraft, helicopters, and blimps take off and land. Aircraft may be stored or maintained at an airport...
control tower
Air traffic control
Air traffic control is a service provided by ground-based controllers who direct aircraft on the ground and in the air. The primary purpose of ATC systems worldwide is to separate aircraft to prevent collisions, to organize and expedite the flow of traffic, and to provide information and other...
s (using color signals for stop or clearance). 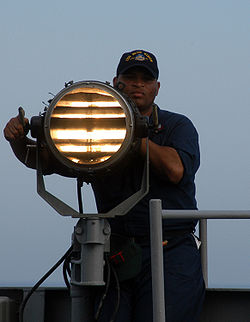 Aldis lamps were pioneered by the British Royal Navy
Royal Navy
The Royal Navy is the naval warfare service branch of the British Armed Forces. Founded in the 16th century, it is the oldest service branch and is known as the Senior Service...
in the late 19th century, and continue to be used through the present day on naval vessels. They provide handy, secure communications during periods of radio silence
Radio silence
In telecommunications, radio silence is a status in which all fixed or mobile radio stations in an area are asked to stop transmitting for safety or security reasons.The term "radio station" may include anything capable of transmitting a radio signal....
as well as other times and were particularly useful for convoy
Convoy
A convoy is a group of vehicles, typically motor vehicles or ships, traveling together for mutual support and protection. Often, a convoy is organized with armed defensive support, though it may also be used in a non-military sense, for example when driving through remote areas.-Age of Sail:Naval...
s operating during the Battle of the Atlantic. There were several types. Some signal lamps were mounted on the masthead
Mast (sailing)
The mast of a sailing vessel is a tall, vertical, or near vertical, spar, or arrangement of spars, which supports the sails. Large ships have several masts, with the size and configuration depending on the style of ship...
s of ships, some small hand-held versions were also used ('The Aldis lamp') and other more powerful ones were mounted on pedestals. These larger ones used a
carbon arc lamp as their light source with a diameter of 20 inches (50 cm). These could be used to signal to the horizon, even in conditions of bright sunlight. Although it was originally thought that it was only possible to communicate by line-of-sight, in practice it was possible to illuminate cloud bases both during the night and day which allowed for communication beyond the horizon. A maximum transmission rate possible by using flashing lights is no more than 14 wpm.

They have a secondary function as simple spotlights
Searchlight
A searchlight is an apparatus that combines a bright light source with some form of curved reflector or other optics to project a powerful beam of light of approximately parallel rays in a particular direction, usually constructed so that it can be swiveled about.-Military use:The Royal Navy used...
.

The idea of flashing dots and dashes from a lantern was first put in to practice by Captain, later Vice Admiral, Philip Colomb
Philip Howard Colomb
Vice-Admiral Philip Howard Colomb, RN . Born in Knockbrex, near Gatehouse of Fleet, Dumfries and Galloway, Scotland, he was a Royal Navy officer, historian, critic and inventor. He was the son of General GT Colomb...
in 1867. His original code, which the Navy used for seven years, was not identical with Morse, but Morse code
Morse code
Morse code is a method of transmitting textual information as a series of on-off tones, lights, or clicks that can be directly understood by a skilled listener or observer without special equipment...
was eventually adopted with the addition of several special signals. Flashing lights were the second generation of signaling in the Royal Navy, after the flag signals
Flag signals
Flag signals can mean any of various methods of using flags or pennants to send signals. Flags may have individual significance as signals, or two or more flags may be manipulated so that their relative positions convey symbols...
most famously used to spread Nelson's rallying-cry
England expects that every man will do his duty
"England expects that every man will do his duty" was a signal sent by Admiral Horatio Nelson, 1st Viscount Nelson from his flagship HMS Victory as the Battle of Trafalgar was about to commence on 21 October 1805. Trafalgar was the decisive naval engagement of the Napoleonic Wars...
before the Battle of Trafalgar
Battle of Trafalgar
The Battle of Trafalgar was a sea battle fought between the British Royal Navy and the combined fleets of the French Navy and Spanish Navy, during the War of the Third Coalition of the Napoleonic Wars ....
.

The Commonwealth Navies and NATO forces use signal lamps when radio communications need to be silent or electronic "spoofing
Spoofing attack
In the context of network security, a spoofing attack is a situation in which one person or program successfully masquerades as another by falsifying data and thereby gaining an illegitimate advantage.- Spoofing and TCP/IP :...
" is likely. Also, given the prevalence of night vision equipment in today's armed forces, signaling at night is usually done with lights that operate in the infrared (IR) spectrum making them less likely to be detected. All modern forces have followed suit due to technological advances in digital communications.

In air traffic control towers
Air traffic control
Air traffic control is a service provided by ground-based controllers who direct aircraft on the ground and in the air. The primary purpose of ATC systems worldwide is to separate aircraft to prevent collisions, to organize and expedite the flow of traffic, and to provide information and other...
, signal lamps are still used today, as a backup device in case of a complete failure of an aircraft's radio. Light signals can be red, green or white, and steady or flashing. Messages are limited to a handful of basic instructions (e.g. "land", "stop" etc.); they are not intended to be used for transmitting messages in Morse code
Morse code
Morse code is a method of transmitting textual information as a series of on-off tones, lights, or clicks that can be directly understood by a skilled listener or observer without special equipment...
. Aircraft can acknowledge signals by rocking their wings or flashing their landing lights
Aircraft landing lights
Landing lights are lights used on aircraft to illuminate the terrain and runway ahead during takeoff and landing.-Overview:Almost all modern aircraft are equipped with landing lights if they are intended and approved for nighttime operations...
.