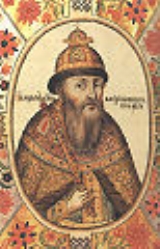 Encyclopedia
The Princes Shuisky were a Rurikid family of boyar
Boyar
A boyar, or bolyar , was a member of the highest rank of the feudal Moscovian, Kievan Rus'ian, Bulgarian, Wallachian, and Moldavian aristocracies, second only to the ruling princes , from the 10th century through the 17th century....
s descending from Grand Duke
Grand Duke
The title grand duke is used in Western Europe and particularly in Germanic countries for provincial sovereigns. Grand duke is of a protocolary rank below a king but higher than a sovereign duke. Grand duke is also the usual and established translation of grand prince in languages which do not...
Dmitry Konstantinovich of Vladimir-Suzdal
Vladimir-Suzdal
The Vladimir-Suzdal Principality or Vladimir-Suzdal Rus’ was one of the major principalities which succeeded Kievan Rus' in the late 12th century and lasted until the late 14th century. For a long time the Principality was a vassal of the Mongolian Golden Horde...
and Prince Andrey Yaroslavich
Andrei II of Russia
Prince Andrey II Yaroslavich was the third son of Yaroslav II who succeeded his uncle Svyatoslav III as the Grand Duke of Vladimir in 1249. Three years later, he challenged the Mongols and was ousted by them from Russia....
, brother to Alexander Nevsky
Alexander Nevsky
Alexander Nevsky was the Prince of Novgorod and Grand Prince of Vladimir during some of the most trying times in the city's history. Commonly regarded as the key figure of medieval Rus, Alexander was the grandson of Vsevolod the Big Nest and rose to legendary status on account of his military...
. Their name is derived from the town of Shuya
Shuya
Shuya is the third largest town in Ivanovo Oblast, Russia; located on the Teza River. Population: -History:The first record of Shuya is dated by 1393. Since 1403, the area was held by a branch of the House of Suzdal, which got their name "Shuysky" after the town. In 1539, the town was sacked by...
, of which they gained ownership in 1403. The family briefly reached the Russian throne in the person of Vasili IV (1606-1610).

The foundations for their fortunes in Muscovite service were laid by Prince Vasily Vasilievich "Bledny" ("the Pale"), who was dispatched by Ivan III to govern Pskov
Pskov
Pskov is an ancient city and the administrative center of Pskov Oblast, Russia, located in the northwest of Russia about east from the Estonian border, on the Velikaya River. Population: -Early history:...
and then Nizhny Novgorod
Nizhny Novgorod
Nizhny Novgorod , colloquially shortened to Nizhny, is, with the population of 1,250,615, the fifth largest city in Russia, ranking after Moscow, St. Petersburg, Novosibirsk, and Yekaterinburg...
(1478-80). The following year, he devastated Livonia
Livonia
Livonia is a historic region along the eastern shores of the Baltic Sea. It was once the land of the Finnic Livonians inhabiting the principal ancient Livonian County Metsepole with its center at Turaida...
and was sent as a governor to Novgorod. In 1487, he was recorded as leading a Russian contingent against Kazan
Kazan
Kazan is the capital and largest city of the Republic of Tatarstan, Russia. With a population of 1,143,546 , it is the eighth most populous city in Russia. Kazan lies at the confluence of the Volga and Kazanka Rivers in European Russia. In April 2009, the Russian Patent Office granted Kazan the...
. The Shuiskys represented a senior line among the descendants of Vsevolod the Big Nest and therefore treated the ruling princes of Muscovy, who were descended from a junior line, with arrogance.

Vasily Bledny's grand nephew, Prince Vasily Vasilievich "Nemoy" ("the Mute") was Grand Prince Vasily III's taciturn aide-de-camp who accompanied him on every military campaign and became a "grey cardinal" of Muscovite politics. In 1517, he defeated forces of Poland and Lithuania under Konstantin Ostrogski as part of the 4th Muscovite-Lithuanian War. Six years later, Vasily Nemoy led a Russian expedition along the Volga against Kazan
Khanate of Kazan
The Khanate of Kazan was a medieval Tatar state which occupied the territory of former Volga Bulgaria between 1438 and 1552. Its khans were the patrilineal descendants of Toqa Temür, the thirteenth son of Jochi and grandson of Genghis Khan. The khanate covered contemporary Tatarstan, Mari El,...
. Upon the death of Vasily III's widow, Elena Glinskaya
Elena Glinskaya
Elena Vasilyevna Glinskaya April 1538, Moscow) was the second wife of Grand Prince Vasili III and regent of Russia for 5 years .- Background :...
, he challenged the authority of Prince Ivan Belsky
Belsky
The Belsky or Belski family was a princely family of Gediminid origin in the Grand Duchy of Lithuania. It later deflected to the Grand Duchy of Moscow and played a key role during the regency of Ivan IV of Russia. The family started with Ivan Vladimirovich, son of Vladimir Olgerdovich and grandson...
, procured his incarceration, married Anastasia of Kazan (Ivan III's granddaughter), and proclaimed himself regent
Regent
A regent, from the Latin regens "one who reigns", is a person selected to act as head of state because the ruler is a minor, not present, or debilitated. Currently there are only two ruling Regencies in the world, sovereign Liechtenstein and the Malaysian constitutive state of Terengganu...
for Vasily III's heir, the young Ivan IV, in 1538.

Vasily Nemoy died later that year, and the power of the regency devolved upon his younger brother, Prince Ivan Vasilievich Shuisky, who began his rule by ousting Metropolitan Daniel from office and contriving the election of Joasaphus Skripitsin as the new head of the Russian Orthodox Church
Russian Orthodox Church
The Russian Orthodox Church or, alternatively, the Moscow Patriarchate The ROC is often said to be the largest of the Eastern Orthodox churches in the world; including all the autocephalous churches under its umbrella, its adherents number over 150 million worldwide—about half of the 300 million...
. He also released from prison his cousin, Prince Andrey Mikhailovich, who had governed Yugoria
Yugra
Yugra was the name of the lands between the Pechora River and Northern Urals in the Russian annals of the 12th–17th centuries, as well as the name of the Khanty and partly Mansi tribes inhabiting these territories, later known as VogulsThe Khanty-Mansi Autonomous Okrug of Russia is also...
and Nizhny Novgorod during Vasily III's reign before having been incarcerated on charges of high treason.

Pending Ivan IV's majority, Ivan and Andrey were de-facto rulers of Russia. Their arrogant and unruly behavior provoked the anger and frustration of the young sovereign, thus sowing seeds for his future wide-scale crackdown on the Russian nobility
Oprichnina
The oprichnina is the period of Russian history between Tsar Ivan the Terrible's 1565 initiation and his 1572 disbanding of a domestic policy of secret police, mass repressions, public executions, and confiscation of land from Russian aristocrats...
. In one of his letters to Prince Kurbsky Ivan painfully recalls that Prince Andrey Shuisky had put his dirty boots on his bed. The matter ended with Andrey being thrown into a cell full of hungry dogs and devoured by them (1543).

In 1540, Metropolitan Joasaphus managed to recall Ivan Belsky from exile, helping him clear the court of the Shuiskys. Two years later, Ivan Shuisky instigated a military revolt and again gained power. He had Macarius
Macarius, Metropolitan of Moscow
Macarius was a notable Russian cleric, writer, and iconographer who served as the Metropolitan of Moscow and all Russia from 1542 until 1563.-Early life and work on the Menaion:...
elected the new metropolitan and regent, but Macarius gradually ousted him from the Kremlin
Kremlin
A kremlin , same root as in kremen is a major fortified central complex found in historic Russian cities. This word is often used to refer to the best-known one, the Moscow Kremlin, or metonymically to the government that is based there...
and persuaded him to resign his powers. Ivan Vasilevich Shuisky died in semi-obscurity in 1546. 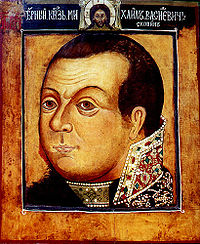 Andrey Mikhailovich's elder brother, Prince Ivan Mikhailovich Pleten', was one of the leading Muscovite generals between 1531 and his death in 1559. During the regency of Elena Glinskaya
Elena Glinskaya
Elena Vasilyevna Glinskaya April 1538, Moscow) was the second wife of Grand Prince Vasili III and regent of Russia for 5 years .- Background :...
he served as the governor of Moscow
Moscow
Moscow is the capital, the most populous city, and the most populous federal subject of Russia. The city is a major political, economic, cultural, scientific, religious, financial, educational, and transportation centre of Russia and the continent...
and of Kholmogory
Kholmogory
Kholmogory is a historic village and the administrative center of Kholmogorsky District of Arkhangelsk Oblast, Russia. It lies on the left bank of the Northern Dvina, along the Kholmogory Highway, 75 km southeast of Arkhangelsk and 90 km north of the Antonievo-Siysky Monastery. The name...
. In 1540, he was put in charge of the Russian army operating in Livonia
Livonia
Livonia is a historic region along the eastern shores of the Baltic Sea. It was once the land of the Finnic Livonians inhabiting the principal ancient Livonian County Metsepole with its center at Turaida...
. In 1542 he routed the Crimean Tatars
Crimean Tatars
Crimean Tatars or Crimeans are a Turkic ethnic group that originally resided in Crimea. They speak the Crimean Tatar language...
. Two years later, he was recorded as operating against Kazan
Kazan
Kazan is the capital and largest city of the Republic of Tatarstan, Russia. With a population of 1,143,546 , it is the eighth most populous city in Russia. Kazan lies at the confluence of the Volga and Kazanka Rivers in European Russia. In April 2009, the Russian Patent Office granted Kazan the...
. In the late 1540s, he administrated the royal palaces. In 1553, Ivan Pleten' signed an armistice with the Grand Duchy of Lithuania
Grand Duchy of Lithuania
The Grand Duchy of Lithuania was a European state from the 12th /13th century until 1569 and then as a constituent part of Polish-Lithuanian Commonwealth until 1791 when Constitution of May 3, 1791 abolished it in favor of unitary state. It was founded by the Lithuanians, one of the polytheistic...
.

During the later part of Ivan IV's reign, the Shuiskys stood aloof from the macabre politics of the Oprichnina
Oprichnina
The oprichnina is the period of Russian history between Tsar Ivan the Terrible's 1565 initiation and his 1572 disbanding of a domestic policy of secret police, mass repressions, public executions, and confiscation of land from Russian aristocrats...
. Probably the most skillful of Ivan's generals was Prince Alexander Borisovich Gorbatyi-Shuisky
Alexander Gorbatyi-Shuisky
Prince Alexander Borisovich Gorbatyi-Shuisky was probably the most celebrated and popular general of Ivan the Terrible. The town of Gorbatov in Nizhny Novgorod Oblast bears his name....
, who advised the Tsar on military reform in the 1550s and presided over the Russian army during the siege and capture of Kazan
Kazan
Kazan is the capital and largest city of the Republic of Tatarstan, Russia. With a population of 1,143,546 , it is the eighth most populous city in Russia. Kazan lies at the confluence of the Volga and Kazanka Rivers in European Russia. In April 2009, the Russian Patent Office granted Kazan the...
in 1552. He was executed on fabricated charges in February 1565.


The last of the Shuiskys

The last scion of the family, Ivan Pugovka, was put in charge of the courts in Moscow during the reign of his brother-in-law Vasily IV. Pugovka outlived his brothers after he was taken with them into captivity in Poland as a result of Vasily IV's fall in 1610, and managed to return and marry a sister of Tsarina Maria Dolgorukova
Maria Dolgorukova
Maria Vladimirovna Dolgorukova was the first wife of Tsar Michael I of Russia....
. Upon his death in 1638 the family went extinct, although one branch reportedly survives in Poland
Poland
Poland , officially the Republic of Poland , is a country in Central Europe bordered by Germany to the west; the Czech Republic and Slovakia to the south; Ukraine, Belarus and Lithuania to the east; and the Baltic Sea and Kaliningrad Oblast, a Russian exclave, to the north...
.
The source of this article is wikipedia, the free encyclopedia.  The text of this article is licensed under the GFDL.