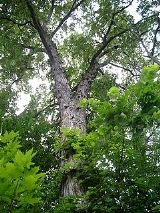 Encyclopedia
Carya ovata, the Shagbark Hickory, is a common hickory
Hickory
Trees in the genus Carya are commonly known as hickory, derived from the Powhatan language of Virginia. The genus includes 17–19 species of deciduous trees with pinnately compound leaves and big nuts...
in the eastern United States
Eastern United States
The Eastern United States, the American East, or simply the East is traditionally defined as the states east of the Mississippi River. The first two tiers of states west of the Mississippi have traditionally been considered part of the West, but can be included in the East today; usually in...
and southeast Canada
Canada
Canada is a North American country consisting of ten provinces and three territories. Located in the northern part of the continent, it extends from the Atlantic Ocean in the east to the Pacific Ocean in the west, and northward into the Arctic Ocean...
. It is a large deciduous
Deciduous
Deciduous means "falling off at maturity" or "tending to fall off", and is typically used in reference to trees or shrubs that lose their leaves seasonally, and to the shedding of other plant structures such as petals after flowering or fruit when ripe...
tree
Tree
A tree is a perennial woody plant. It is most often defined as a woody plant that has many secondary branches supported clear of the ground on a single main stem or trunk with clear apical dominance. A minimum height specification at maturity is cited by some authors, varying from 3 m to...
, growing up to 27 m tall, and will live up to 200 years. Mature Shagbarks are easy to recognize because, as their name implies, they have shaggy bark. This characteristic is however only found on mature trees; young specimens have smooth bark.

The Shagbark Hickory's nut is edible and has a very sweet taste.

The leaves
Leaf
A leaf is an organ of a vascular plant, as defined in botanical terms, and in particular in plant morphology. Foliage is a mass noun that refers to leaves as a feature of plants....
are 30–60 cm long, pinnate
Pinnate
Pinnate is a term used to describe feather-like or multi-divided features arising from both sides of a common axis in plant or animal structures, and comes from the Latin word pinna meaning "feather", "wing", or "fin". A similar term is pectinate, which refers to a comb-like arrangement of parts...
, with five (rarely three or seven) leaflets, the terminal three leaflets much larger than the basal pair. The Shagbark hickory is monoecious. Staminate flowers are borne on long-stalked catkins at the tip of old wood or in the axils of the previous season's leaves. Pistillate flowers occur in short terminal spikes. The fruit
Fruit
In broad terms, a fruit is a structure of a plant that contains its seeds.The term has different meanings dependent on context. In non-technical usage, such as food preparation, fruit normally means the fleshy seed-associated structures of certain plants that are sweet and edible in the raw state,...
is a 2.5–4 cm long drupe
Drupe
In botany, a drupe is a fruit in which an outer fleshy part surrounds a shell of hardened endocarp with a seed inside. These fruits develop from a single carpel, and mostly from flowers with superior ovaries...
, an edible nut
Nut (fruit)
A nut is a hard-shelled fruit of some plants having an indehiscent seed. While a wide variety of dried seeds and fruits are called nuts in English, only a certain number of them are considered by biologists to be true nuts...
with a hard, bony shell, contained in a thick, green four-sectioned husk which turns dark and splits off at maturity in the fall. The terminal buds on the Shagbark Hickory are large and covered with loose scales. The word "hickory" is said to have come from the Algonquian
Algonquian languages
The Algonquian languages also Algonkian) are a subfamily of Native American languages which includes most of the languages in the Algic language family. The name of the Algonquian language family is distinguished from the orthographically similar Algonquin dialect of the Ojibwe language, which is a...
Indian word "pawcohiccora". Shagbark hickory nuts were a significant food source for the Algonquians. Red squirrels, Gray squirrel
Eastern Gray Squirrel
The eastern gray squirrel is a tree squirrel in the genus Sciurus native to the eastern and midwestern United States, and to the southerly portions of the eastern provinces of Canada...
s, Raccoons, Chipmunks, and mice
MICE
-Fiction:*Mice , alien species in The Hitchhiker's Guide to the Galaxy*The Mice -Acronyms:* "Meetings, Incentives, Conferencing, Exhibitions", facilities terminology for events...
are consumers of hickory nuts. Other consumers include black bear
American black bear
The American black bear is a medium-sized bear native to North America. It is the continent's smallest and most common bear species. Black bears are omnivores, with their diets varying greatly depending on season and location. They typically live in largely forested areas, but do leave forests in...
s, gray and red foxes, rabbits, and bird species such as mallards, wood ducks, bobwhites, and wild turkey.

There are two varieties:

Shagbark hickory is found throughout most of the eastern United States, but it is largely absent from the southeastern
Atlantic Coastal Plain
The Atlantic coastal plain has both low elevation and low relief, but it is also a relatively flat landform extending from the New York Bight southward to a Georgia/Florida section of the Eastern Continental Divide, which demarcates the plain from the ACF River Basin in the Gulf Coastal Plain to...
and Gulf coastal plain
Gulf Coastal Plain
The Gulf Coastal Plain extends around the Gulf of Mexico in the Southern United States and eastern Mexico.The plain reaches from the western Florida Panhandle, the southwestern two thirds of Alabama, over most of Mississippi, some of western Tennessee and Kentucky, southwest Arkansas, the Florida...
s and lower Mississippi Delta
Mississippi Delta
The Mississippi Delta is the distinctive northwest section of the U.S. state of Mississippi that lies between the Mississippi and Yazoo Rivers. The region has been called "The Most Southern Place on Earth" because of its unique racial, cultural, and economic history...
areas.

The nuts are edible with an excellent flavor, and are a popular food among people and squirrels alike. They are unsuitable to commercial or orchard production: Shagbark hickories can grow to enormous sizes but are unreliable bearers. The nuts can be used as a good substitute for their more southerly relative, the pecan
Pecan
The pecan , Carya illinoinensis, is a species of hickory, native to south-central North America, in Mexico from Coahuila south to Jalisco and Veracruz, in the United States from southern Iowa, Illinois, Missouri, and Indiana east to western Kentucky, southwestern Ohio, North Carolina, South...
and have nearly the same application in baking.

Shagbark hickory wood
Wood
Wood is a hard, fibrous tissue found in many trees. It has been used for hundreds of thousands of years for both fuel and as a construction material. It is an organic material, a natural composite of cellulose fibers embedded in a matrix of lignin which resists compression...
is used for smoking meat
Meat
Meat is animal flesh that is used as food. Most often, this means the skeletal muscle and associated fat and other tissues, but it may also describe other edible tissues such as organs and offal...
and for making the bows
Bow (weapon)
The bow and arrow is a projectile weapon system that predates recorded history and is common to most cultures.-Description:A bow is a flexible arc that shoots aerodynamic projectiles by means of elastic energy. Essentially, the bow is a form of spring powered by a string or cord...
of Native Americans
Indigenous peoples of the Americas
The indigenous peoples of the Americas are the pre-Columbian inhabitants of North and South America, their descendants and other ethnic groups who are identified with those peoples. Indigenous peoples are known in Canada as Aboriginal peoples, and in the United States as Native Americans...
of the northern area.

"Hickory" is derived from pawcohiccora, an Algonquian Indian word for the tree's oily nutmeat.
The nuts were a food source for Native Americans.

The wood of the shagbark hickory has been used in a number of ways. The lumber is heavy, hard, tough and has been employed for implements and tools that require strength. These include: axles, axe handles, ploughs, and skis.

The bark of the shagbark hickory is also used to flavor a bitter maple syrup
Maple syrup
Maple syrup is a syrup usually made from the xylem sap of sugar maple, red maple, or black maple trees, although it can also be made from other maple species such as the bigleaf maple. In cold climates, these trees store starch in their trunks and roots before the winter; the starch is then...
-style syrup.

Shagbark hickory hybridizes with pecan, Carya illinoensis, and shellbark hickory, C. Laciniosa (C. x dunbarii Sarg.). Shagbark hickory has 32 chromosomes. In general, species within the genus with the same chromosome number are able to cross. Numerous hybrids among the Carya species with 32 chromosomes (pecan, bitternut, shellbark, and shagbark) have been described though most are unproductive or have other flaws. A few hican
Hican
A Hican is a tree resulting from a cross between a pecan and some other type of hickory members of the genus Carya - or the nut from such a hybrid tree. Such crosses often occur naturally. While most such hybrids produce unfilled nuts or have other serious flaws, some have desirable qualities from...
varieties are commercially propagated.