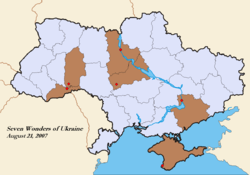 The Seven Wonders of Ukraine ( ˈsʲim tʃʲuˈdes ukraˈjinɪ) are the seven historical and cultural monuments of Ukraine
Ukraine
Ukraine is a country in Eastern Europe. It has an area of 603,628 km², making it the second largest contiguous country on the European continent, after Russia...
, which were chosen in the Seven Wonders of Ukraine contest held in July, 2007. The voting consisted of two parts: experts in Ukraine voted for their seven best sites, and internet users voted for their seven favorite sites on the official website.

The initiative was started by the one of the current deputy chairman of Verkhovna Rada
Verkhovna Rada
The Verkhovna Rada of Ukraine is Ukraine's parliament. The Verkhovna Rada is a unicameral parliament composed of 450 deputies, which is presided over by a chairman...
Mykola Tomenko
Mykola Tomenko
Mykola Volodymyrovych Tomenko is a Ukrainian politician and statesman. He has been a member of the Verkhovna Rada for two consecutive convocations . In Verkhovna Rada he served as the Chairman of the Freedom of Speech and Mass Media Committee...
under the motto "Piznai Ukrainu!" (Discover Ukraine). The initiative was a continuation of numerous preceding public actions that took place in various regions of Ukraine such as "Kupala's games at the native land of Hohol
Hohol
Hohol', Hohol is a Ukrainian Cossack surname.Known people with the surname:* Albert "Bert" Edward Hohol, a Canadian provincial level politician from Alberta* Mikola Vasyl'ovich Hohol', Ukrainian-Russian author...
" (Poltava region), "Starry autumn in Kachanivka" (Chernihiv region), "Let's discover island Khortutsia" (Zaporizhia region), "Maslyana in Bukovyna" (Chernivtsi region), "Amber legends of Rivne region", "Day of Europe at the native land of Lesya Ukrainka
Lesya Ukrainka
Larysa Petrivna Kosach-Kvitka better known under her literary pseudonym Lesya Ukrainka , was one of Ukraine's best-known poets and writers and the foremost woman writer in Ukrainian literature. She also was a political, civil, and female activist....
" (Volyn region), and others.

Among the other members of the organization committee were

Local and provincial (oblast
Oblast
Oblast is a type of administrative division in Slavic countries, including some countries of the former Soviet Union. The word "oblast" is a loanword in English, but it is nevertheless often translated as "area", "zone", "province", or "region"...
) authorities composed a list of 1,000 possible candidates. An expert council consisting of 100 people, including culturologists, historians, and tourist specialists, chose a list of 21 candidates from which people on the internet could vote.

Voting on the 21 possible candidates was opened on July 7, 2007. A total of around 77,000 internet users voted in the campaign. The voting was closed on August 21, 2007 and the results were officially announced on the same day. The campaign was initiated in May 2007 by Mykola Tomenko
Mykola Tomenko
Mykola Volodymyrovych Tomenko is a Ukrainian politician and statesman. He has been a member of the Verkhovna Rada for two consecutive convocations . In Verkhovna Rada he served as the Chairman of the Freedom of Speech and Mass Media Committee...
a Ukrainian politician and the deputy of the Parliament of Ukraine
Verkhovna Rada
The Verkhovna Rada of Ukraine is Ukraine's parliament. The Verkhovna Rada is a unicameral parliament composed of 450 deputies, which is presided over by a chairman...
of the fifth convocation.

Each manager of a winning nomination was awarded a statue of their candidate made out of green marble
Marble
Marble is a metamorphic rock composed of recrystallized carbonate minerals, most commonly calcite or dolomite.Geologists use the term "marble" to refer to metamorphosed limestone; however stonemasons use the term more broadly to encompass unmetamorphosed limestone.Marble is commonly used for...
, matte steel
Steel
Steel is an alloy that consists mostly of iron and has a carbon content between 0.2% and 2.1% by weight, depending on the grade. Carbon is the most common alloying material for iron, but various other alloying elements are used, such as manganese, chromium, vanadium, and tungsten...
, and gold-mirror acrylic paint
Acrylic paint
Acrylic paint is fast drying paint containing pigment suspension in acrylic polymer emulsion. Acrylic paints can be diluted with water, but become water-resistant when dry...
.

Three objects from the nomination list needed a special nomination: