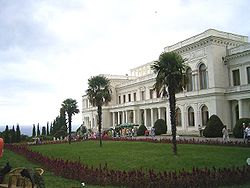 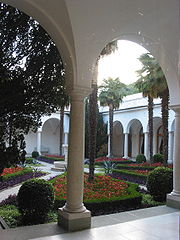 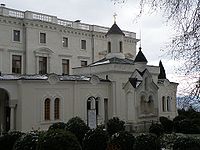 Livadia Palace was a summer retreat of the last Russian tsar, Nicholas II, and his family in Livadiya, Crimea
Crimea
Crimea , or the Autonomous Republic of Crimea , is a sub-national unit, an autonomous republic, of Ukraine. It is located on the northern coast of the Black Sea, occupying a peninsula of the same name...
in southern Ukraine
Ukraine
Ukraine is a country in Eastern Europe. It has an area of 603,628 km², making it the second largest contiguous country on the European continent, after Russia...
. The Yalta Conference
Yalta Conference
The Yalta Conference, sometimes called the Crimea Conference and codenamed the Argonaut Conference, held February 4–11, 1945, was the wartime meeting of the heads of government of the United States, the United Kingdom, and the Soviet Union, represented by President Franklin D...
was held there in 1945, when the palace housed the apartments of Franklin Delano Roosevelt and other members of the American delegation. Today the palace houses a museum, but it is sometimes used by the Ukrainian authorities for international summits.

Formerly granted to Lambros Katsonis
Lambros Katsonis
Lambros Katsonis was a Greek naval admiral of the 18th century. Born in Levadia, he joined the Orlov Revolt in 1770, but not pleased by the result he built up a small fleet and began harassing the Ottomans in the Aegean Sea...
and then a possession of the Potocki
Potocki
Potocki is the surname of a Polish noble family.-History:The Potocki family is a great artistocratic family originated from Potok in the Kraków Voivodeship; their family name derives from that place name. The family is heavily entwined with the cultural development and history of Poland's Eastern...
family, the Livadia estate became a summer residence of the Russian imperial family in the 1860s, when architect Ippolito Monighetti built a large palace, a small palace, and a church there. The residence was frequented by Alexander II of Russia
Alexander II of Russia
Alexander II , also known as Alexander the Liberator was the Emperor of the Russian Empire from 3 March 1855 until his assassination in 1881...
, while his successor Alexander III
Alexander III of Russia
Alexander Alexandrovich Romanov , historically remembered as Alexander III or Alexander the Peacemaker reigned as Emperor of Russia from until his death on .-Disposition:...
used to live (and died) in the smaller palace. It was perhaps disagreeable associations with the latter circumstance that led his son Nicholas to have both palaces torn down and replaced with a larger structure.

In 1909 Nicholas and his wife travelled to Italy
Italy
Italy , officially the Italian Republic languages]] under the European Charter for Regional or Minority Languages. In each of these, Italy's official name is as follows:;;;;;;;;), is a unitary parliamentary republic in South-Central Europe. To the north it borders France, Switzerland, Austria and...
, where they were captivated by Renaissance
Renaissance
The Renaissance was a cultural movement that spanned roughly the 14th to the 17th century, beginning in Italy in the Late Middle Ages and later spreading to the rest of Europe. The term is also used more loosely to refer to the historical era, but since the changes of the Renaissance were not...
palaces shown to them by Victor Emmanuel III. Upon their return, they engaged Nikolay Krasnov
Nikolay Krasnov
Nikolay Ivanovich Krasnov was a major-general of the Imperial Russian Army.Nikolay Krasnov was born in the stanitsa Veshenskaya of the Don Voisko Province into the family of the Ataman of Don Cossack Voisko, lieutenant-general Ivan Krasnov...
, Yalta
Yalta
Yalta is a city in Crimea, southern Ukraine, on the north coast of the Black Sea.The city is located on the site of an ancient Greek colony, said to have been founded by Greek sailors who were looking for a safe shore on which to land. It is situated on a deep bay facing south towards the Black...
's most fashionable architect, responsible for the grand ducal residences in Koreiz
Koreiz
Koreiz is a townlet in the Yalta region of Crimea, Ukraine. The name of the town means "villages" in Greek. The nearby spa of Miskhor was absorbed into Koreiz in 1958.Koreiz is best known as the site of two palaces...
, to prepare plans for a brand new imperial palace. The tsar's diary testifies that the design was much discussed in the imperial family; it was decided that all four facades of the palace should look different. Construction works lasted for seventeen months; the new palace was inaugurated on 11 September 1911. Grand Duchess Olga
Grand Duchess Olga Nikolaevna of Russia
Grand Duchess Olga Nikolaevna of Russia ; , November 16 after 1900 – July 17, 1918) was the eldest daughter of the last autocratic ruler of the Russian Empire, Emperor Nicholas II, and of Empress Alexandra of Russia....
celebrated her 16th birthday that November at Livadia.

The palace was once used as a mental institution, and now serves as a museum on the territory of Ukraine
Ukraine
Ukraine is a country in Eastern Europe. It has an area of 603,628 km², making it the second largest contiguous country on the European continent, after Russia...
. Most of the historical artifacts have been lost, but anything that has been recovered can be seen for a small fee. In August 2007 the palace was recognized as a landmark of a modern history by the Seven Wonders of Ukraine
Seven Wonders of Ukraine
The Seven Wonders of Ukraine are the seven historical and cultural monuments of Ukraine, which were chosen in the Seven Wonders of Ukraine contest held in July, 2007...
project. Ukrainian pop singer Sofia Rotaru
Sofia Rotaru
Sofia Mykhailivna Yevdokymenko-Rotaru known as Sofia Rotaru is a Soviet and Ukrainian pop singer of Romanian/Moldavian heritage....
, who celebrated her 60th birthday at the palace in the company of the presidents of Russia, Ukraine and Moldavia - the second such meeting since the Yalta Conference
Yalta Conference
The Yalta Conference, sometimes called the Crimea Conference and codenamed the Argonaut Conference, held February 4–11, 1945, was the wartime meeting of the heads of government of the United States, the United Kingdom, and the Soviet Union, represented by President Franklin D...
- funded the reconstruction of Livadia Palace in 2008..

The palace contains 116 rooms, with interiors furnished in different styles. There are a Pompeian vestibule, an English billiard-room, a Neo-baroque
Neo-baroque
The Baroque Revival or Neo-baroque was an architectural style of the late 19th century. The term is used to describe architecture which displays important aspects of Baroque style, but is not of the Baroque period proper—i.e., the 17th and 18th centuries.Some examples of Neo-baroque architecture:*...
dining room, and a Jacob-style
François-Honoré-Georges Jacob-Desmalter
François-Honoré-Georges Jacob-Desmalter oversaw one of the most successful and influential furniture workshops in Paris, from 1796 to 1825...
study of maple wood, which elicited particular admiration of Nicholas II.