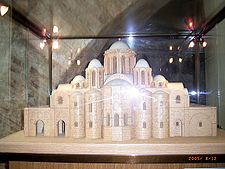 Saint Sophia Cathedral in Kiev
Kiev
Kiev or Kyiv is the capital and the largest city of Ukraine, located in the north central part of the country on the Dnieper River. The population as of the 2001 census was 2,611,300. However, higher numbers have been cited in the press....
is an outstanding architectural monument
Monument
A monument is a type of structure either explicitly created to commemorate a person or important event or which has become important to a social group as a part of their remembrance of historic times or cultural heritage, or simply as an example of historic architecture...
of Kievan Rus'
Kievan Rus'
Kievan Rus was a medieval polity in Eastern Europe, from the late 9th to the mid 13th century, when it disintegrated under the pressure of the Mongol invasion of 1237–1240....
. Today, it is one of the city's best known landmarks and the first Ukrainian patrimony to be inscribed on the World Heritage List along with the Kiev Cave Monastery complex. Aside from its main building, the cathedral includes an ensemble of supporting structures such as a bell tower, the House of Metropolitan, and others. In 2011 the historic site was reassigned from the jurisdiction of the Ministry of Regional Development of Ukraine to the Ministry of Culture of Ukraine. One of the reasons for that move was the fact that both "Sofia Kyivska" and Kiev Pechersk Lavra
Kiev Pechersk Lavra
Kiev Pechersk Lavra or Kyiv Pechersk Lavra , also known as the Kiev Monastery of the Caves, is a historic Orthodox Christian monastery which gave its name to one of the city districts where it is located in Kiev, the capital of Ukraine....
are recognized by the UNESCO World Heritage Program as one complex, while in Ukraine the two were governed by different government entities.

In Ukrainian
Ukrainian language
Ukrainian is a language of the East Slavic subgroup of the Slavic languages. It is the official state language of Ukraine. Written Ukrainian uses a variant of the Cyrillic alphabet....
the cathedral is known as . In Russian
Russian language
Russian is a Slavic language used primarily in Russia, Belarus, Uzbekistan, Kazakhstan, Tajikistan and Kyrgyzstan. It is an unofficial but widely spoken language in Ukraine, Moldova, Latvia, Turkmenistan and Estonia and, to a lesser extent, the other countries that were once constituent republics...
it is known as .

The complex of the Cathedral is the main component and museum of the National Preserve "Sophia of Kiev" which is the state institution responsible for the preservation of the Cathedral complex as well as four other historic landmarks across the nation.

The first foundation
Foundation (architecture)
A foundation is the lowest and supporting layer of a structure. Foundations are generally divided into two categories: shallow foundations and deep foundations.-Shallow foundations:...
s were laid in 1037 (or 1011), but the cathedral took two decades to complete. (According to Dr. Nadia Nikitenko, an historian who has studied the cathedral for 30 years, the cathedral was founded already in 1011, under the reign of Yaroslav's father, the varangian [viking] and Grand Prince of Kievan Rus', Volodymyr/Vladimir/Valdemarr the Great. This info has been accepted by both UNESCO and Ukraine, which officially celebrates the 1000:th anniversary of the cathedral during 2011.) The structure has 5 nave
Nave
In Romanesque and Gothic Christian abbey, cathedral basilica and church architecture, the nave is the central approach to the high altar, the main body of the church. "Nave" was probably suggested by the keel shape of its vaulting...
s, 5 apse
Apse
In architecture, the apse is a semicircular recess covered with a hemispherical vault or semi-dome...
s, and (quite surprisingly for Byzantine architecture
Byzantine architecture
Byzantine architecture is the architecture of the Byzantine Empire. The empire gradually emerged as a distinct artistic and cultural entity from what is today referred to as the Roman Empire after AD 330, when the Roman Emperor Constantine moved the capital of the Roman Empire east from Rome to...
) 13 cupola
Cupola
In architecture, a cupola is a small, most-often dome-like, structure on top of a building. Often used to provide a lookout or to admit light and air, it usually crowns a larger roof or dome....
s. It is surrounded by two-tier galleries from three sides. Measuring 37 to 55 m (121.4 to 180.4 ft), the exterior used to be faced with plinth
Plinth
In architecture, a plinth is the base or platform upon which a column, pedestal, statue, monument or structure rests. Gottfried Semper's The Four Elements of Architecture posited that the plinth, the hearth, the roof, and the wall make up all of architectural theory. The plinth usually rests...
s. On the inside, it retains mosaics and fresco
Fresco
Fresco is any of several related mural painting types, executed on plaster on walls or ceilings. The word fresco comes from the Greek word affresca which derives from the Latin word for "fresh". Frescoes first developed in the ancient world and continued to be popular through the Renaissance...
s from the eleventh century, including a dilapidated representation of Yaroslav's family, and the Orans
Orans
Orans , is a figure with extended arms or bodily attitude of prayer, usually standing, with the elbows close to the sides of the body and with the hands outstretched sideways, palms up....
.

After the pillaging of Kiev by Andrei Bogolyubsky
Andrei Bogolyubsky
Prince Andrei I of Vladimir, commonly known as Andrey Bogolyubsky was a prince of Vladimir-Suzdal . He was the son of Yuri Dolgoruki, who proclaimed Andrei a prince in Vyshhorod . His mother was a Kipchak princess, khan Aepa's daughter.- Life :He left Vyshhorod in 1155 and moved to Vladimir...
of Vladimir-Suzdal
Vladimir-Suzdal
The Vladimir-Suzdal Principality or Vladimir-Suzdal Rus’ was one of the major principalities which succeeded Kievan Rus' in the late 12th century and lasted until the late 14th century. For a long time the Principality was a vassal of the Mongolian Golden Horde...
in 1169, followed by Mongolian Tatars
Mongol invasion of Rus
The Mongol invasion of Russia was resumed on 21 December 1237 marking the resumption of the Mongol invasion of Europe, during which the Mongols attacked the medieval powers of Poland, Kiev, Hungary, and miscellaneous tribes of less organized peoples...
in 1240, the cathedral fell into disrepair. Following the 1595-96 Union of Brest
Union of Brest
Union of Brest or Union of Brześć refers to the 1595-1596 decision of the Church of Rus', the "Metropolia of Kiev-Halych and all Rus'", to break relations with the Patriarch of Constantinople and place themselves under the Pope of Rome. At the time, this church included most Ukrainians and...
, the Cathedral of Saint Sophia belonged to the Ukrainian Greek Catholic Church
Ukrainian Greek Catholic Church
The Ukrainian Greek Catholic Church , Ukrainska Hreko-Katolytska Tserkva), is the largest Eastern Rite Catholic sui juris particular church in full communion with the Holy See, and is directly subject to the Pope...
until it was claimed by the Moldavian Orthodox metropolitan
Metropolitan bishop
In Christian churches with episcopal polity, the rank of metropolitan bishop, or simply metropolitan, pertains to the diocesan bishop or archbishop of a metropolis; that is, the chief city of a historical Roman province, ecclesiastical province, or regional capital.Before the establishment of...
Peter Mogila (Mohyla) in 1633. Mogila commissioned the repair work and the upper part of the building was thoroughly rebuilt, modeled by the Italian architect Octaviano Mancini in the distinct Ukrainian Baroque
Ukrainian Baroque
Ukrainian Baroque or Cossack Baroque is an architectural style that emerged in Ukraine during the Hetmanate era, in the 17th and 18th centuries....
style, while preserving the Byzantine interior, keeping its splendor intact. The work continued under the Cossack
Cossack
Cossacks are a group of predominantly East Slavic people who originally were members of democratic, semi-military communities in what is today Ukraine and Southern Russia inhabiting sparsely populated areas and islands in the lower Dnieper and Don basins and who played an important role in the...
Hetman
Hetman
Hetman was the title of the second-highest military commander in 15th- to 18th-century Poland and the Grand Duchy of Lithuania, which together, from 1569 to 1795, comprised the Polish-Lithuanian Commonwealth, or Rzeczpospolita....
Ivan Mazepa
Ivan Mazepa
Ivan Stepanovych Mazepa , Cossack Hetman of the Hetmanate in Left-bank Ukraine, from 1687–1708. He was famous as a patron of the arts, and also played an important role in the Battle of Poltava where after learning of Peter I's intent to relieve him as acting Hetman of Ukraine and replace him...
, and in 1740 the Cathedral was completed to its present form.

After the Russian Revolution of 1917
Russian Revolution of 1917
The Russian Revolution is the collective term for a series of revolutions in Russia in 1917, which destroyed the Tsarist autocracy and led to the creation of the Soviet Union. The Tsar was deposed and replaced by a provisional government in the first revolution of February 1917...
and during the Soviet antireligious campaign of the 1920s, the government plan called for the cathedral's destruction and transformation of the grounds into a park "Heroes of Perekop
Perekop
Perekop is a village located at the Perekop Isthmus connecting Crimean peninsula to the Ukrainian mainland. It is known for the Fortress Or Qapi that served as the gateway to Crimea...
" (after a Red Army
Red Army
The Workers' and Peasants' Red Army started out as the Soviet Union's revolutionary communist combat groups during the Russian Civil War of 1918-1922. It grew into the national army of the Soviet Union. By the 1930s the Red Army was among the largest armies in history.The "Red Army" name refers to...
victory in the Russian Civil War
Russian Civil War
The Russian Civil War was a multi-party war that occurred within the former Russian Empire after the Russian provisional government collapsed to the Soviets, under the domination of the Bolshevik party. Soviet forces first assumed power in Petrograd The Russian Civil War (1917–1923) was a...
in Crimea
Crimea
Crimea , or the Autonomous Republic of Crimea , is a sub-national unit, an autonomous republic, of Ukraine. It is located on the northern coast of the Black Sea, occupying a peninsula of the same name...
). The cathedral was saved from destruction primarily with the effort of many scientists and historians. Nevertheless, in 1934, Soviet
Soviet Union
The Soviet Union , officially the Union of Soviet Socialist Republics , was a constitutionally socialist state that existed in Eurasia between 1922 and 1991....
authorities confiscated the structure from the church, including the surrounding seventeenth–eighteenth century architectural complex and designated it as an architectural and historical museum.

Since the late 1980s Soviet, and later Ukrainian, politicians promised to return the building to the Orthodox Church. Due to various schisms and factions
History of Christianity in Ukraine
The History of Christianity in Ukraine dates back to the earliest centuries of the apostolic church. It has remained the dominant religion in the country since its acceptance in 988 by Vladimir the Great , who instated it as the state religion of Kievan Rus', a medieval East Slavic state.Although...
within the Church the return was postponed as all Orthodox and the Greek-Catholic Churches lay claim to it. Although all of the Orthodox churches have been allowed to conduct services at different dates, at other times they are denied access. Most memorable was the funeral of Patriarch Volodymyr of the Ukrainian Orthodox Church - Kiev Patriarchy in 1995, when riot police were forced to prevent the burial on the premises of the museum and a bloody clash took place. After events such as those no religious body has yet been given the rights for regular services. The complex now remains a museum of Ukraine's Christianity, with most of its visitors being tourists.