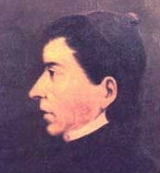 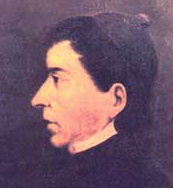 At the age of 16 he entered the Dominican Order
Dominican Order
The Order of Preachers , after the 15th century more commonly known as the Dominican Order or Dominicans, is a Catholic religious order founded by Saint Dominic and approved by Pope Honorius III on 22 December 1216 in France...
in Mexico City. He studied philosophy and theology in the College of Porta Coeli, and was ordained a priest. By the age of 27 he had earned his doctorate and was a noted preacher.

For his "disrespect", Archbishop Nuñez de Haro condemned Mier to ten years exile in the convent of Las Caldas del Besaya, in Cantabria
Cantabria
Cantabria is a Spanish historical region and autonomous community with Santander as its capital city. It is bordered on the east by the Basque Autonomous Community , on the south by Castile and León , on the west by the Principality of Asturias, and on the north by the Cantabrian Sea.Cantabria...
, Spain
Spain
Spain , officially the Kingdom of Spain languages]] under the European Charter for Regional or Minority Languages. In each of these, Spain's official name is as follows:;;;;;;), is a country and member state of the European Union located in southwestern Europe on the Iberian Peninsula...
; a perpetual ban from teaching, preaching or hearing confessions; and the loss of his doctoral degree.

In 1796, he was granted permission to present his case to the Council of the Indies. However, on his return from the Council, he took the wrong road and was arrested again. This time he was confined to the Franciscan convent in Burgos
Burgos
Burgos is a city of northern Spain, historic capital of Castile. It is situated at the edge of the central plateau, with about 178,966 inhabitants in the city proper and another 20,000 in its suburbs. It is the capital of the province of Burgos, in the autonomous community of Castile and León...
. In 1801, he escaped and took refuge in Bayonne
Bayonne
Bayonne is a city and commune in south-western France at the confluence of the Nive and Adour rivers, in the Pyrénées-Atlantiques department, of which it is a sub-prefecture...
, France
France
The French Republic , The French Republic , The French Republic , (commonly known as France , is a unitary semi-presidential republic in Western Europe with several overseas territories and islands located on other continents and in the Indian, Pacific, and Atlantic oceans. Metropolitan France...
. From Bayonne he passed to Bordeaux
Bordeaux
Bordeaux is a port city on the Garonne River in the Gironde department in southwestern France.The Bordeaux-Arcachon-Libourne metropolitan area, has a population of 1,010,000 and constitutes the sixth-largest urban area in France. It is the capital of the Aquitaine region, as well as the prefecture...
and later to Paris
Paris
Paris is the capital and largest city in France, situated on the river Seine, in northern France, at the heart of the Île-de-France region...
. There he was interpreter for the rich Peruvian José Sarea, Count of Gijón.

In Paris, he came to know Lucas Alamán
Lucas Alamán
Lucas Ignacio Alamán y Escalada was a Mexican scientist, politician, historian and writer. He studied at the Real Colegio de Minas de la Nueva España. He frequently traveled on his credentials as a scientist and diplomat, becoming one of the most educated men in Mexico...
, then traveling as a student but later an important conservative politician in Mexico, Baron Alexander von Humboldt
Alexander von Humboldt
Friedrich Wilhelm Heinrich Alexander Freiherr von Humboldt was a German naturalist and explorer, and the younger brother of the Prussian minister, philosopher and linguist Wilhelm von Humboldt...
, the Duke of Montmorency, and Chateaubriand. In 1802, he left the Dominican Order and became a secular priest in Rome.

When he returned to Madrid, he was again apprehended, this time for a satire he had written supporting Mexican independence. He was sent to the reformatory in Seville
Seville
Seville is the artistic, historic, cultural, and financial capital of southern Spain. It is the capital of the autonomous community of Andalusia and of the province of Seville. It is situated on the plain of the River Guadalquivir, with an average elevation of above sea level...
, from which he escaped in 1804. However, he was again arrested and returned to prison, where he spent three years. Then the pope named him his domestic prelate, because he had converted two rabbis to Catholicism.

In the war between France and Spain, he returned to Spain as military chaplin of the Volunteers of Valencia. He was present at many battles. In Belchite he was taken prisoner by the French, but he was able to escape again (for the fifth time). He presented himself to General Blake, who recommended him to the Junta of Seville for his services. The Regency in Cádiz granted him an annual pension of 3,000 pesos.

He moved to London
London
London is the capital city of :England and the :United Kingdom, the largest metropolitan area in the United Kingdom, and the largest urban zone in the European Union by most measures. Located on the River Thames, London has been a major settlement for two millennia, its history going back to its...
, where he collaborated with José María Blanco on El Español, a newspaper that supported the independence movements in Latin America.

In London, he met the Spanish revolutionary Francisco Javier Mina
Francisco Javier Mina
Francisco Javier Mina was a Spanish lawyer and army officer and a Mexican revolutionary.-Biography:...
. Mina convinced him to join an expedition to New Spain to fight for its independence. They sailed for New Spain on May 15, 1816. With the capture of the insurgents' fort at Soto la Marina on June 13, 1817, Mier was taken prisoner again, this time by the royalists. He was sent to the castle of San Carlos de Perote, thence to the dungeons of the Inquisition, and finally, in 1820, to Havana
Havana
Havana is the capital city, province, major port, and leading commercial centre of Cuba. The city proper has a population of 2.1 million inhabitants, and it spans a total of — making it the largest city in the Caribbean region, and the most populous...
. Escaping for a sixth time, he fled to Philadelphia, where he remained until the establishment of Mexican independence.

He opposed the Mexican Empire under Agustín de Iturbide
Agustín de Iturbide
Agustín Cosme Damián de Iturbide y Aramburu , also known as Augustine I of Mexico, was a Mexican army general who built a successful political and military coalition that was able to march into Mexico City on 27 September 1821, decisively ending the Mexican War of Independence...
, and was arrested again. He was imprisoned in the convent of Santo Domingo, but on January 1, 1823 he escaped again, for the seventh and last time.


As a member of the constituent congress

He was elected a deputy to the second constituent congress. On December 13, 1823 he delivered his famous speech "Discurso de las profecias" (loosely translated, "Prophetic Discourse"). In this speech he argued for a centralized republic or in the event of a federal system being adopted, for its being in moderation. He was among the signers of the Act Constituting the Federation and of the Federal Constitution of the United States of Mexico. Mexico's first president, Guadalupe Victoria
Guadalupe Victoria
Guadalupe Victoria born José Miguel Ramón Adaucto Fernández y Félix, was a Mexican politician and military man who fought for independence against the Spanish Empire in the Mexican War of Independence. He was a deputy for Durango and a member of the Supreme Executive Power...
, invited him to live in the palace.

Nearing death, he invited his friends to a party to bid him farewell on November 16, 1827. He gave a speech justifying his life and opinions, and died on December 3, 1827. He was interred with great honor in the church of Santo Domingo. In 1861 his body was exhumed, together with 12 others. All the bodies were mummified.

The mummies were exhibited under the claim they were victims of the Inquisition. Some of the mummies, including Mier's, were sold to an Italian who accepted the claim. His mummy was later shown in Brussels but what became of his remains after that is unknown.

Mier published many speeches, sermons and letters on religion and politics, including the following: